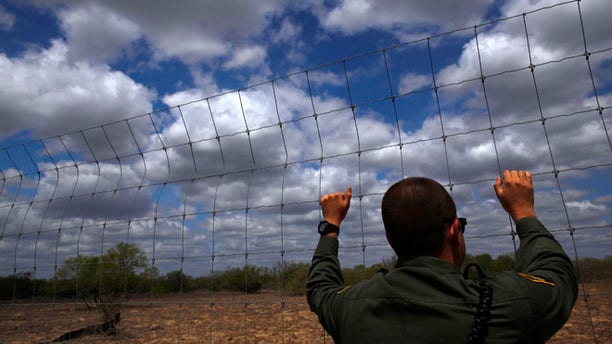 March 29, 2013: An immigration agent looks out at the desert near Falfurrias, Texas. (Reuters)

A federal judge in Texas is accusing the Department of Homeland Security of hand-delivering children smuggled into the United States to their illegal immigrant parents.

U.S. District Judge Andrew S. Hanen revealed the practice in a blistering court order filed late last week. He said the "dangerous" practice is effectively aiding human traffickers and particularly the drug cartels, which run many of these operations.

"These actions are both dangerous and unconscionable," he wrote.

The judge attempted to lift the curtain on what is happening behind the scenes of the Obama administration's changing approach to immigration enforcement. It has been well-documented that DHS is allowing some illegal immigrants already inside the country to skirt deportation, and particularly those who came to the U.S. as children.

But the "conspiracy" outlined by Hanen would take that controversial policy a big step further. He detailed the case of an illegal immigrant parent in Virginia, but used that as an entry point to describe what he suggested was a broader program.

Hanen claimed that, in more than one case before his court, immigration officials are arresting human traffickers smuggling children into the U.S. -- and then "delivering the minors to the custody of the parent illegally living in the United States."

"The DHS has simply chosen not to enforce the United States' border security laws," he wrote.

Further, he said this is simply encouraging risky smuggling operations. "Time and again this court has been told by representatives of the government and the defense that cartels control the entire smuggling process," Hanen wrote. "... the government is not only allowing [illegal immigrants in the U.S.] to fund the illegal and evil activities of these cartels, but is also inspiring them to do so."

He added: "To put this in another context, the DHS policy is as logical as taking illegal drugs or weapons that it has seized from smugglers and delivering them to the criminals who initially solicited their illegal importation/exportation. Legally, this situation is no different."

Representatives with the Department of Homeland Security and other immigration agencies have not yet returned a request for comment on the judge's statement.

"This is exactly what's happening," he said, describing how agents "can't keep up" with the number of minors crossing the border, either by themselves or in the custody of smugglers. Crane said immigration officials, then, are tasked with finding a place for the children to go.

"That's what we do now. We babysit kids and change diapers," he said. "It's out of control."

Crane said the best short-term solution would be to return the children to the family members they were staying with in their home country.

The judge's statement was prompted by the case of Mirtha Veronica Nava-Martinez. She was arrested at the Texas-Mexico border in May and pleaded guilty to trying to smuggle a 10-year-old child originally from El Salvador. After the sentencing, the judge wrote, he decided to go public with additional details from the case.

He wrote that the "conspiracy" started when an illegal immigrant in Virginia hired smugglers to get her daughter from El Salvador to Virginia. She paid $6,000 in advance. But after the smuggling operation was interrupted by federal agents, he wrote, "the DHS delivered the child to her."

Further, he wrote, this was the fourth case he'd seen in as many weeks along these lines. In one case, he claimed, the U.S. government "flew a child to multiple locations" in the U.S. at the expense of U.S. taxpayers. "This is an absurd and illogical result," he wrote.

The judge noted that after the court inquired about the incidents, a federal prosecutor apparently "requested" that the mother in Virginia be placed in immigration proceedings. He said it's unclear whether that has happened, and he's been told the government will not pursue prosecution.

Hanen wrote that he is "not unsympathetic" to the parents in these cases, but noted the danger these children are put in.

"If [DHS officials] persist in this policy, more children are going to be harmed, and the DHS will be partly responsible because it encourages this kind of Russian roulette," he wrote.