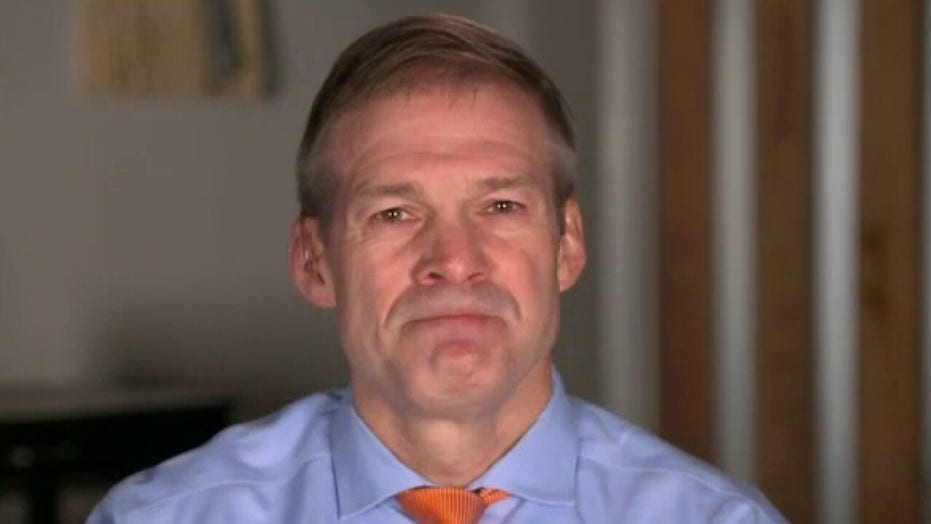 Rep. Jordan on Swalwell scandal: 'There are some fundamental questions here'

Jordan, who was just reelected to his eighth two-year term representing Ohio's 4th Congressional District, is on a three-day swing in Georgia campaigning on behalf of Loeffler and Perdue, including spending all day Sunday on a “Save America Tour” organized by the conservative group Club for Growth Action.

The conservative lawmaker and strong Trump supporter on Monday told Fox News that he’s witnessed “a real energy for David and Kelly” because Georgians “know what’s at stake” if the Democrats win both runoff contests, giving the their party control both the Senate and House as well as the White House.

President Trump in recent weeks has been very critical of Georgia Republican Gov. Brian Kemp and GOP Secretary of State Brad Raffensperger for certifying and defending President-elect Joe Biden's victory in the state over Trump by less than 12,000 votes.

“People were walking up to me yesterday saying they were very upset with Gov. Kemp and Secretary Raffensperger, they expressed that,” Jordan said.

But he added that the frustration over the general election results won’t get in the way of the runoff contests. “Voters are smart. They get it,” he added.

Jordan was interviewed by Fox News minutes before presidential electors from all 50 states and Washington, D.C., began meeting Monday to officially cast their ballots for president and vice president of the United States.

The meetings, a formal step in presidential elections, come after weeks of failed legal challenges by Trump campaign and his allies, which culminated in the Supreme Court on Friday turning down a lawsuit from the Texas attorney general that aimed to throw out the presidential election results in Pennsylvania, Wisconsin, Georgia and Michigan, four key battleground states narrowly carried by Biden. Trump has refused to concede to Biden and continues to charge that there was massive voter fraud in the presidential election.

Jordan was one of more than 100 House Republicans who signed on to support the longshot and unsuccessful lawsuit.

But Jordan is still calling for a debate in Congress when it meets in joint session on Jan. 6 to formally count the Electoral College results and certify the next president and vice president.

He criticized Democrats, “who for four years tried to undue the will of the American people when we had elected President Trump and they went after him for four years,” and urged that “for goodness sakes, everyone relax. We have until Jan. 6.”

“Jan. 6 is the final determination. I’m for a debate that day,” he said. “If there’s a debate on the House floor on Jan. 6 about whether some electors from some certain states should be accepted ... I think that’s good for the country.”

And pointing to new national polling – including a survey from Fox News that indicated that 36% of voters think Trump was cheated out of a re-election victory – Jordan said “one-third of the country thinks the election was stolen. … that’s why I’m all for letting the process play out.”

While Trump has blasted DeWine for recognizing Biden’s victory and urged that the GOP governor face a primary challenge when he’s up for reelection in two years, Jordan doesn’t sound like he has interest in mounting such a challenge.

He criticized DeWine and other leaders who’ve enacted tough restrictions to stem the spread of the virus, saying that “lots and lots of Americans, not just in Ohio but around the country, are fed up with some of the ridiculous rules that have been put on them, ridiculous infringements on their liberty.”

But he highlighted that he was “focused on doing the work of the United States Congress for the citizens of in the 4th District of Ohio and for conservatives around the country. I’m going to stay focused on that.”

Asked again about the possibility of a primary challenge, he responded, “I have no plans to run for governor.”