Sen. Kennedy blasts Democrats' three-year 'tantrum' over 2016 election: 'This is all wicked crazy'

Democrats are in the midst of a three-year&nbsp;"tantrum" over the 2016 election of President Trump and their&nbsp;behavior has become "abusive," Sen. John Kennedy said Wednesday.&nbsp;

Democrats are in the midst of a nearly three-year "tantrum" over the 2016 election of President Trump and their behavior has become "abusive," Sen. John Kennedy said Wednesday.

Kennedy, R-La., responded on "America's Newsroom" to the ongoing battle between the Justice Department and House Judiciary Committee Chairman Jerry Nadler, D-N.Y. who surprised some by offering to negotiate with the DOJ "without conditions" on his subpoena requests.

The offer raised the possibility that Attorney General Bill Barr's contempt vote may be postponed or canceled, if both sides return to the negotiating table. Nadler, however, pointedly refused to cancel the planned contempt vote prior to beginning any new negotiations, as the DOJ had demanded.

At the same time, Nadler criticized what he called DOJ "brinksmanship," and blamed the Justice Department for purportedly cutting off negotiations on May 7.

WHY DID MUELLER EDIT TRANSCRIPT OF VOICEMAIL WITH FLYNN LAWYER TO ELIMINATE KEY DISCLAIMERS? 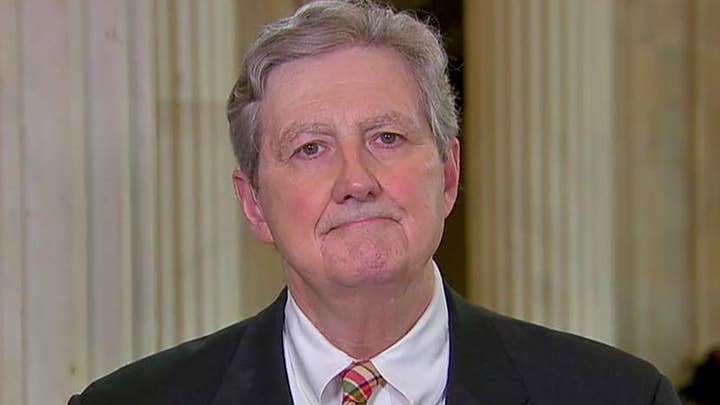 ANALYSIS: BARR DETERMINED TO FIND TRUTH BEHIND ORIGINS OF RUSSIA PROBE -- AND DEMS ARE WORRIED

Kennedy, who sits on the Senate Judiciary Committee, called Nadler's actions "wicked crazy" and "wicked abusive," and questioned whether the subpoenas have any "legitimate" legislative purpose.

"They've asked the administration for everything but the kitchen sink at the White House and they may ask for that," he said.

"We're going into the third year that they've been throwing a tantrum over the election result. They need to leave the man alone, let him be president," he argued, adding that Democrats should campaign against the president if they dislike him.

"I wish I didn't have to say this. There are some members of the House leadership whose only mission in life is to demonize the president."