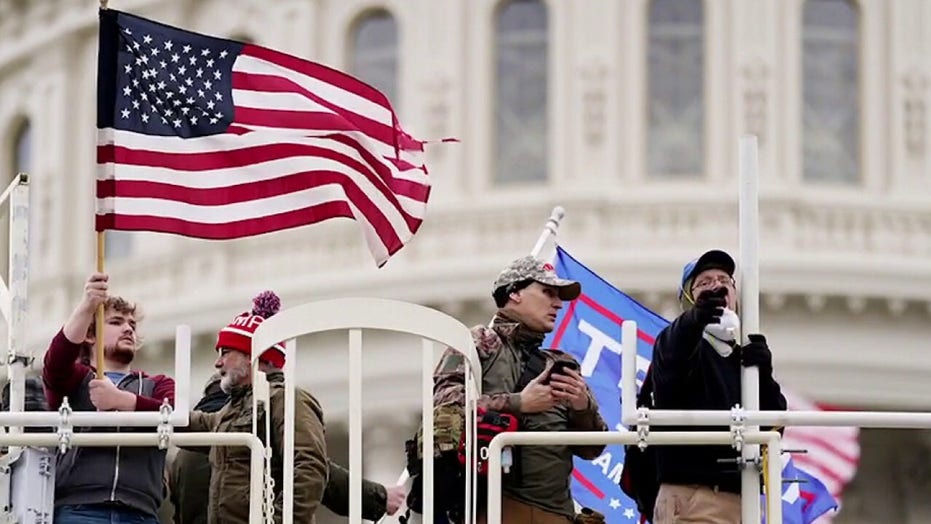 The House Democratic Caucus chairman Tuesday said the first hearing of the new Jan. 6 select committee will test the GOP on whether they truly "back the blue" as they claim.

Rep. Hakeem Jeffries, D-N.Y., said if Republicans stand by law enforcement, as they claim, then they should stand with the brave police officers who will testify next week before the House on their harrowing experiences fighting off a mob at the Capitol six months ago.

"Hundreds of Capitol police officers were violently assaulted on Jan. 6," Jeffries told reporters at the Capitol Tuesday. "Republican members of the House claim to back the blue. They'll have an opportunity at the first hearing to keep it real and to demonstrate that those words are not just rhetorical, but they really plan to support the Capitol Police officers who defended our democracy at great personal cost to themselves on Jan. 6."

The first hearing of the newly formed Jan. 6 committee is scheduled for 9:30 a.m. ET on Tuesday, July 27, when the lawmakers will hear first-hand accounts from four police officers who were defending the Capitol that day. Republicans have dismissed the new committee as a political ploy, but Democrats have argued there needs to be an in-depth investigation on what went wrong and how to prevent such an attack from happening again.

In all, about 140 police officers were injured during the Jan. 6 attack. Two police officers died by suicide in the days that followed, and a third, Capitol Police Officer Brian Sicknick, collapsed and later died after engaging with the protesters. A medical examiner later found he died of natural causes.

Republicans overwhelmingly rejected the formation of the select committee to investigate the cause of the Jan. 6 attack, saying it was unnecessary and too partisan. But House Speaker Nancy Pelosi, D-Calif., pushed forward with the effort after Republicans in the Senate also previously sunk plans to form a nonpartisan and independent commission that Democrats initially wanted.

Pelosi tapped Wyoming Republican Liz Cheney to her newly formed select committee along with seven Democrats. House Minority Leader Kevin McCarthy, R-Calif., announced his five picks on Monday: Reps. Jim Jordan of Ohio, Jim Banks of Indiana, Rodney Davis of Illinois, Kelly Armstrong of North Dakota and Troy Nehls of Texas. Pelosi has the final say over the appointments and has not yet indicated she'll veto any of McCarthy's choices.