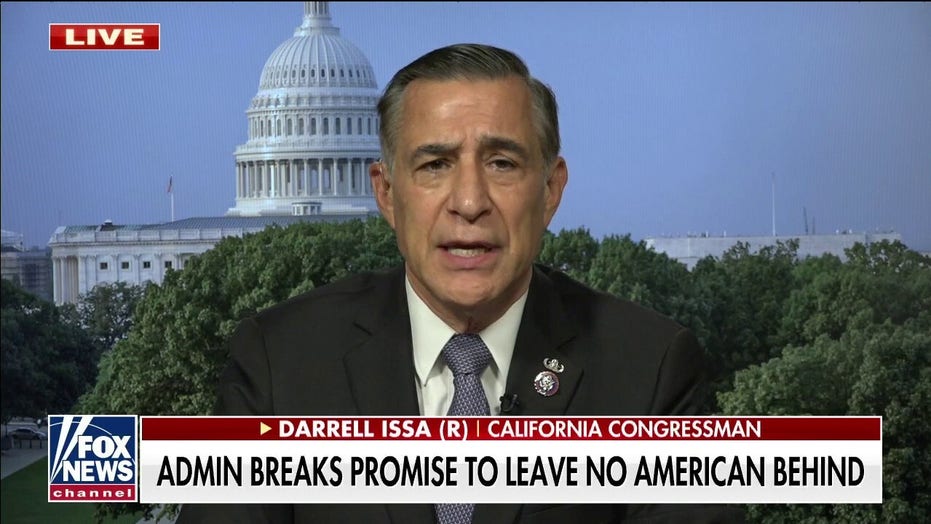 Rep. Issa trying to help pregnant constituent get out of Afghanistan

House Foreign Affairs Committee member Darrell Issa on the fight to free trapped citizens in Afghanistan and bring them back to America.

The State Department on Friday conceded that there are significantly more Americans in Afghanistan than previously estimated -- leading to Rep. Darrell Issa, R-Calif., and other Republicans to accuse the administration of a "betrayal" of Americans abroad.

State Department officials briefed congressional staff this week and told them that it is in touch with 363 Americans in Afghanistan and nearly 176 legal permanent residents, a congressional source who was on the call told Fox News.

That 363 number is significantly higher than previous estimates by the Biden administration, which had put the number at around 100 in September -- and is only the number with whom the State Dept. is in contact. CNN first reported the 363 figure.

It comes amid continuing fallout from the botched withdrawal from Afghanistan ahead of the Aug 31 withdrawal deadline -- which saw a scramble of Americans and Afghans trying to get out of the country before the Taliban took over.

At a press briefing Friday, State Department spokesman Ned Price did not confirm to reporters the number the department was in touch with as a whole -- but said that the number of Americans who actually wish to leave was at one point below 100 but was now between 100 and 200 amid a fluid situation on the ground.

"That figure has risen in recent days as more Americans in Afghanistan have decided to depart in light of our successful facilitation of dozens of departures in recent weeks," he said.

So far the State Department has facilitated the departure of 234 citizens and 144 lawful permanent residents, he said.

Issa, who has been working to evacuate a number of Americans stuck in Afghanistan back to the United States, said he saw the numbers as proof the administration had lied about the withdrawal.

"What we long suspected is now confirmed: what the White House calls a historically successful airlift was in reality the worst ever betrayal of American citizens in a foreign land," he told Fox News. "So they lied about it from the beginning." 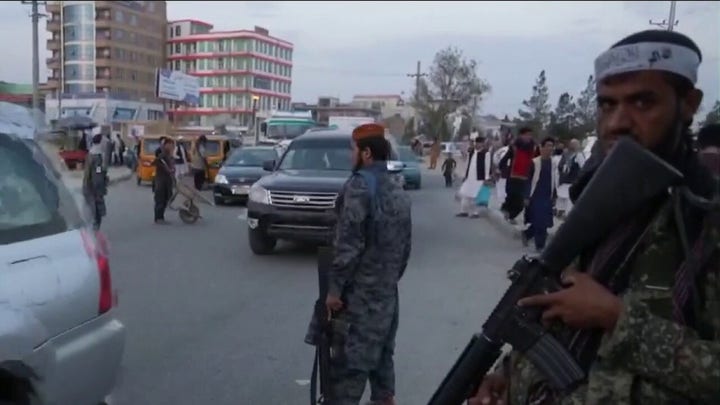 Issa’s reaction was shared by Sen. Ben Sasse, R-Neb., who accused the administration of having shamelessly and repeatedly lied about the number of Americans trapped behind Taliban lines.

"For weeks, their official number was ‘about a hundred’ and it magically never changed — as Americans slowly got out the total number never went down," he said.

The staffer who was on the call suggested there were many more the State Department was not yet in touch with, perhaps because they are scared to come forward out of fear of reprisals by the Taliban.

"What about the people they’re not in touch with?" the staffer told Fox News. "Those who are scared to speak out, how do you put a number on that, or that are scared to use WhatsApp or text a +1 American number, or to even text in English?" they said.

The staffer told Fox that the State Department said it was working with third parties to get people out of Afghanistan, setting up conduits to streamline the process -- while admitting that the guidance had been confusing about what chartered flights needed to take off and land in assisting with the evacuation effort.

On Friday, Price said the department’s goal is to make flights out of Kabul more routine in order to facilitate even more departures of Americans and others -- "and we are committed to doing so."

"We’ve also consistently said there’s a slightly larger universe of Americans with whom we’re in touch and who are not yet ready, for whatever reason, to leave," he said. "That number is also far from immutable as Americans reach out to us, and given the dynamic – the very dynamic nature of human decision-making."

On Friday, Issa announced that an American citizen, Prince Wafa, who had worked as a translator and traveled to Afghanistan to bring his wife home, had been successfully evacuated. Issa’s office said it was in contact regularly with the man, as well as State Dept. personnel. The man had previously written to President Biden pleading for help.

"Prince Wafa provided outstanding support for our troops and bravely served our country when we were in need," Issa said in a release. "This time, he risked all by returning to Afghanistan to bring his wife home. The Biden Administration left them behind and we didn’t rest until they were on their way home."

As the situation in Afghanistan continues to unfold, the staffer who spoke to Fox said that the situation felt like the administration "has broken a social contract between America and its citizens."

"When I go overseas there's never a question in my mind that if something happened that blue passport would get me out of trouble -- I have doubts about that now."