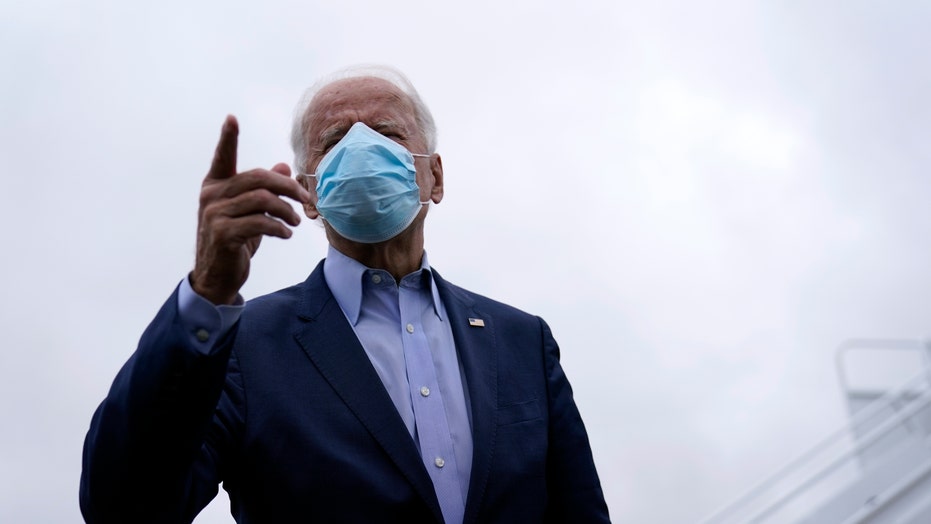 With just 20 days and counting until the presidential election, Democratic nominee Joe Biden's campaign is running down the clock.

Most national polls have the former vice president maintaining a lead even in battlegrounds like Arizona and Florida that President Trump captured four years ago.

Biden is up by seven percentage points in Pennsylvania, the state where he was born and which Trump also won. Nationally, the former vice president has a 10-percentage point lead, according to the Real Clear Politics average.

In addition, in an election with more mail voting than ever before due to the coronavirus pandemic, Democrats are leading early-voter turnout. Polling locations in states like Texas and Georgia saw lines with wait-times of over 11 hours for in-person voters.

More than 10.6 million voters across the country have already cast their ballots as of Tuesday morning, according to data from the U.S. Elections Project.

By comparison, on Oct. 16 of the 2016 presidential election, only about 1.4 million voters had cast a ballot.

According to a Wednesday report in The Hill, the Biden team sees its current standings as ideal and hopes to continue on the same trajectory through Election Day.

In a slight shift to what was initially a solely virtual campaign -- especially during the early months of the pandemic in the United States -- Biden has been traveling in recent weeks.

Despite taking a different approach than the Trump camp -- which has relied heavily on door-to-door canvassing -- no other contemporary presidential challenger has maintained such a sizeable lead with less than a month before the election, according to The Hill.

While Biden's campaign has pledged to not take anything for granted or neglect states -- harkening back to former Secretary of State Hillary Clinton's missed opportunities in Rust Belt states like Michigan -- the current strategy is reportedly to let the president fall on his own sword.

Trump, who had previously downplayed the threat of COVID-19, which has killed more than 215,000 Americans and infected millions -- announced two weeks ago that he himself had contracted the virus.

Since then, the president has also upended the traditional debate schedule after a tempestuous showdown in Cleveland, Ohio, at the beginning of the month.

Speaking in Gettysburg, Pa., last week, Biden never mentioned the president by name while emphasizing his own wish to end "an era of division."

Democratic strategist Chris Moyer, a veteran of the 2016 Hillary Clinton presidential campaign and New Jersey Sen. Cory Booker’s 2020 campaign for the White House, told Fox News that the Biden campaign hasn't been "pulling back or playing safe," but is "continuing to stick to the strategy that has gotten them to this position of strength" with just weeks to go until the election.

This week, the president has returned to the campaign trail with his eye on Iowa.

On Thursday night, both Trump and Biden will participate in dueling town hall events in lieu of a traditional debate.

While President Trump joins NBC News' Savannah Guthrie in Miami, Biden will take part in an ABC News town hall in Philadelphia set to air at the same time.

Later this week, the president moves on to Nevada -- also a state he lost to Clinton -- and Biden and company continue to focus on battlegrounds. Former President Barack Obama is expected to stump for the campaign next week in states where early voting is underway.