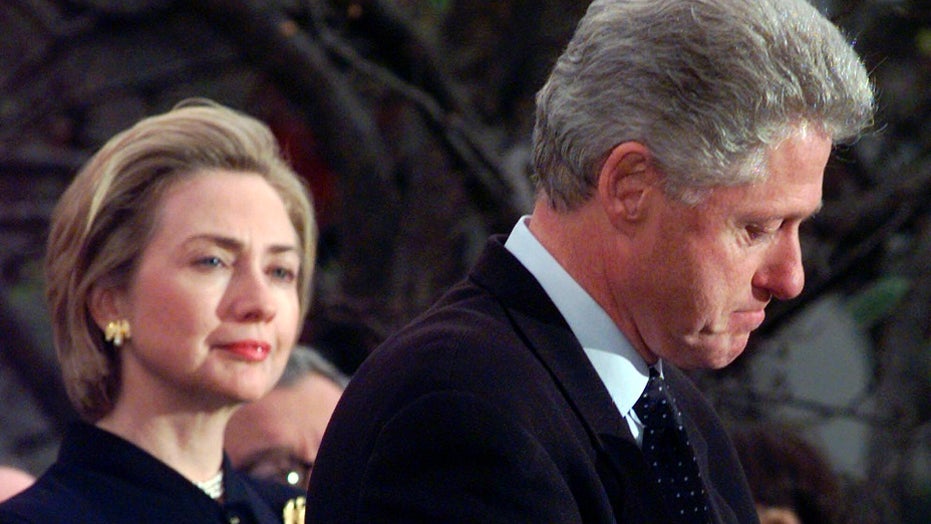 As the Senate impeachment trial of President Trump finally got underway Tuesday after weeks of acrimony between lawmakers over the fairness of the proceedings, it's worth noting that other American presidents have also faced potential removal from office.

The Democratic-led House approved two articles of impeachment against Trump last month, stemming from the president's July phone call with Ukrainian President Volodymyr Zelensky in which Trump allegedly pressured his counterpart to open up an investigation into the son of his political rival, former Vice President Joe Biden, in exchange for military aid.

Trump has denied the allegations, which have pit Democrats and Republicans against each other in a bitter dispute over the fairness of the proceedings.

In this Dec. 19, 1998 file photo, first lady Hillary Rodham Clinton watches President Clinton pause as he thanks those Democratic members of the House of Representatives who voted against impeachment at the White House in Washington. (AP Photo/Susan Walsh, File)

Former President Bill Clinton is the only living president to have gone through the same process.

The Clinton impeachment proceedings were different in significant ways compared to the ongoing effort against Trump. The effort against Clinton didn't take place in an election year and stemmed from his personal life rather than his acts as president.

Unlike the present, when the Democrats control the House and Republicans have a Senate majority, the GOP controlled both chambers in Clinton's day.

In 1998, House lawmakers approved two articles of impeachment against Clinton, charging him with lying under oath to a federal grand jury and obstructing justice. He was only the second president to be impeached; the other was Andrew Johnson.

The House sent the charges to the Senate within minutes. In Trump's case, the House held onto the charges for weeks in a bid to extract favorable terms for the trial.

The charges stemmed from Clinton's affair with Monica Lewinsky, a 21-year-old White House intern. He initially denied the affair with his now-famous statement: “I did not have sexual relations with that woman, Ms. Lewinsky.”

In January 1999, a Senate trial began presided with then-Supreme Court Justice William Rehnquist. Clinton was acquited of both articles five weeks later, with the prosecution failing to get the two-thirds majority needed.

Despite being impeached, Clinton finished his second term and apologized to Congress after the trial.