Within minutes of the vote to impeach President Trump Wednesday night, the D.C. Circuit Court of Appeals demanded that House Democrats explain whether the development undercut their legal demands for testimony from White House Counsel Don McGahn and for documents related to Special Counsel Robert Mueller's probe.

The case could have broad implications for Democrats' efforts to obtain access to Trump administration officials and their files, as the impeachment proceedings afforded Congress greater legal authority to go to court and demand access.

In a pair of orders directed at both House Judiciary Committee Democrats and the Department of Justice, the appellate court sought arguments by Monday as to "whether the articles of impeachment render this case moot and whether expedited consideration remains necessary."

"The Department of Justice (DOJ) takes extraordinary positions in this case,” the House Judiciary Committee said in a filing. “It does so to avoid disclosing grand-jury material needed for the House’s impeachment of President Trump and the Senate’s trial to remove him from office.”

READ THE DC CIRCUIT'S ORDER ON THE MCGHAN CASE

READ THE DC CIRCUIT'S ORDER ON THE GRAND JURY MATERIALS

Now that the impeachment proceedings have concluded in the House, the Democrats should explain whether they still seek to compel McGahn's testimony and, if so, whether it would be "in furtherance" of an impeachment inquiry or as a matter of "legislative oversight," the first D.C. Circuit order stated.  It was signed by George H.W. Bush appointee Karen Henderson, George W. Bush appointee Thomas Griffith, and Clinton appointee Judith Rogers.

The White House has asserted longstanding executive privileges to bar McGahn from supplying documents and testimony to House investigators, saying internal White House deliberations must remain protected. McGahn’s interview with special counsel investigators factored prominently into the section probing whether the president obstructed justice, including a claim that McGahn disobeyed Trump’s call to have him seek Mueller’s removal. 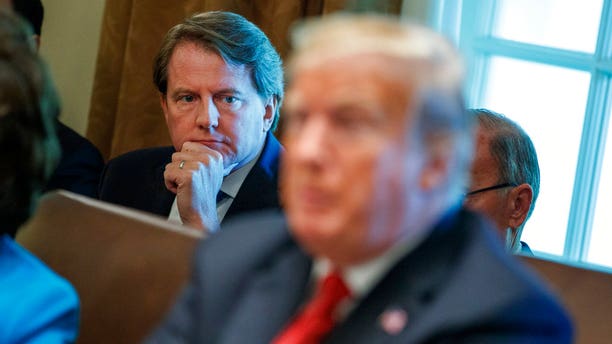 PELOSI MOCKED FOR SHOOTING DOWN IMPEACHMENT QUESTIONS AT HEATED PRESSER

Concerning the Mueller grand jury materials, House Democrats similarly would need to explain whether they were needed as part of an impeachment probe, the appellate court said. That order was signed by Trump appointee Neomi Rao, as well as Rogers and Griffith.

Justice Department lawyers have argued that House Democrats already had sufficient evidence from Mueller's investigation, including copies of summaries of FBI witness interviews. A small amount of information was redacted from the report available to Congress in order to protect ongoing grand jury proceedings, as required by law.

In response, Democrats could argue that they intend to launch a new impeachment inquiry -- risking significant political backlash -- or they could attempt to justify their subpoenas based on more limited existing legislative authority.

Meanwhile, House Speaker Nancy Pelosi, D-Calif, has suggested that she might hold the articles of impeachment in the House, without sending them to the GOP-controlled Senate.

That arrangement might be unconstitutional and wind up in its own court battle, former Harvard Law Professor Alan Dershowitz argued in a column Thursday.

"It is difficult to imagine anything more unconstitutional, more violative of the intention of the Framers, more of a denial of basic due process and civil liberties, more unfair to the president and more likely to increase the current divisiveness among the American people," Dershowitz wrote. "Put bluntly, it is hard to imagine a worse idea put forward by good people."