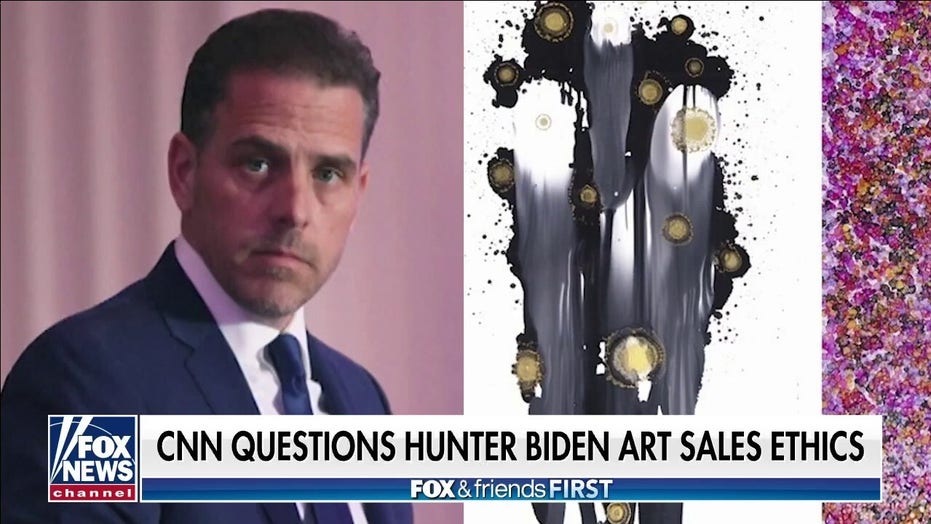 Hunter Biden's artwork, the prices for which range between $75,000 and $500,000, are highly overpriced and indicate that buyers will be paying for the Biden last name, rather than the art itself, experts say.

Their assessments will likely add to what is a growing ethics problem for President Biden.

Three art critics and one art professor – Geoffrey Young, Ben Davis, Tabish Khan and John Ploff, respectively – told POLITICO that the prices for Hunter's artwork are nowhere close to where they should be for a budding artist.

Young said the president’s son’s paintings were "better" than he thought they would be, but the price point is still much higher than it should be.

"Traditionally, young artists are a bargain, and if they begin to sustain a career, gallerists raise the prices incrementally, as they should," Young told POLITICO.

"Paintings are only as valuable as what some customer will pay for ‘em… he’s complexly famous, but not yet for art," he continued. "Guess people will pay for a known last name."

Davis agreed that the astronomical prices for the younger Biden's art come from his last name.

"For an emerging artist doing his first show, this would put Hunter Biden in the top, top tier of what was thinkable," Davis said. "These are prices for an already successful artist."

He also pointed out that Biden's paintings are being sold at the same price point as established artists Dana Schultz, Alice Neel and Stanley Whitney, who recently sold works for $500,000.

"So that is the company that Hunter Biden’s art, which no one has seen, is keeping," Davis remarked.

Davis added that there’s "a lot of bluff and buster and marketing" when it comes to art prices, noting that art dealers "lie about them all the time to inflate values."

He also said that Biden’s dealer, Georges Berges, "may be bluffing and talking up Biden’s prices."

"There's no science to such things," Davis said. "But it is absolutely, 100% certain that what is being sold is the Biden name and story."

"In the case of anyone who has a celebrity name outside of art, as with Hunter Biden, it's clearly the name of the artist that's driving the price and if it sells, then that's probably also the motivating factor for the person who buys it," Khan said in the article.

The London critic said he would not critique pieces he hasn’t personally viewed and wasn’t too familiar with Biden’s work, but said that "an initial online glance suggests there's nothing new or challenging about his work."

"As to whether I think it's worth the asking price, I don't think I'll ever spend that much money on a work of art nor be in a position where I have that amount of cash in hand," Khan said. "And if I did, I wouldn't spend it on a work by Hunter Biden."

Ploff, who teaches at the Art Institute of Chicago, said that a person buying the younger Biden’s art is "paying for the brush with fame."

The White House has said it plans to keep the anonymous buyers of Biden’s art secret from him, though Hunter is reportedly slated to attend his art shows where he could meet potential buyers.

Additionally, there is nothing preventing a buyer from informing the Bidens that they purchased Hunter's art.

When asked for comment on the POLITICO report, former Obama administration ethics chief Walter Shaub told Fox News in a Thursday email with large, bolded letters, "Ceci n'est pas l’éthique" — French for "this is not ethics."

The White House did not respond to Fox News' request for comment on the report.