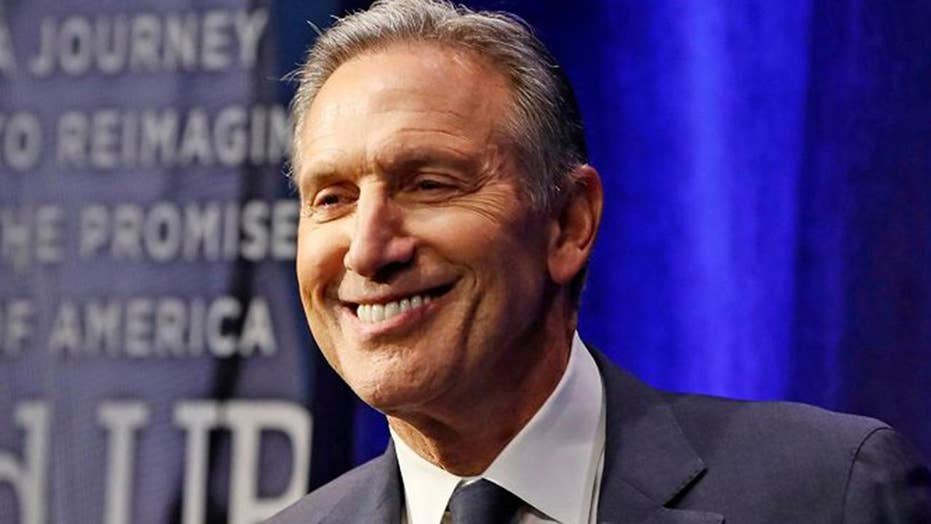 Former Starbucks CEO Howard Schultz, in an interview with Fox News, said Thursday that Democrats would be at risk of playing a "spoiler" role if they nominate a socialist-aligned candidate to challenge President Trump -- as he tries to turn the tables on criticism from the left that he could ruin the party’s 2020 hopes should he run for president as an independent.

The billionaire businessman pointedly pushed back on claims that an independent bid would amount to a spoiler candidacy handing Trump a second term, arguing that voters are looking for a centrist candidate who can bridge the political divide.

"If you want to talk about spoiler, if the Democrats decide in their wisdom to nominate a far-left person who is professing policies ... of a socialist — that will be a spoiler,” Schultz said

Schultz, who said in January that he is mulling an independent presidential run, has sought to position himself as a centrist alternative to Trump’s controversial policies and the Democrats' leftward drift. Some Democratic pollsters and analysts have raised concerns over how a candidate like self-proclaimed democratic socialist Sen. Bernie Sanders, I-Vt., or others who have supported big-government policies like the Green New Deal would fare in winning over moderate voters.

Matt Bennett, vice president of Third Way, a center-left think tank, says this "could be trouble" if Democrats aren't offering a vision of the country that speaks to ordinary voters ahead of the 2020 presidential election.

"The risk is that the eventual nominee goes too far during this primary process and becomes hard to support for a lot of people who might be interested in getting rid of Trump,” he said.

Schultz has sought to position himself as a moderate foil to both parties' current brand of politics.

The 65-year-old Seattle billionaire, who launched a tour in January to promote his latest book, "From the Ground Up: A Journey to Reimagine the Promise of America," has been the subject of presidential speculation ever since saying when he retired from Starbucks last June that his future could include "public service."

On paper, Schultz offers a number of qualities that might appeal to voters. He grew up in public housing in Brooklyn, New York, and became the first person in his family to graduate from college.

The former Starbucks chief is also a longtime Democratic donor, contributing to the campaigns of former President Barack Obama, Hillary Clinton, New York Sen. Chuck Schumer, and Washington Sens. Patty Murray and Maria Cantwell, among others. But his story and past Democratic support appear to have not won him any leeway with a Democratic Party singularly focused on taking back the White House from Trump and concerned that any independent run would be to Trump’s benefit.

Schultz was almost immediately hit with criticism after telling “60 Minutes” back in January that he was considering a White House run, with Democrats from David Axelrod, the former adviser to then-President Barack Obama, to Tina Podlodowski, the Democratic Party chairwoman in Washington state, urging him not to launch a campaign.

"For somebody who is professing to be a lifelong Democrat, I think to be running as in independent in this particular cycle is not a wise thing to do," Podlodowski said.

The Democratic backlash, however, has done little to dissuade Schultz as he continues touring the country, even as he vows not to do anything to help Trump stay in the White House.

"Let's just lay it out, the two-party system is broken and not working on behalf of the American people," he said. "Americans deserve better and we can fix it."