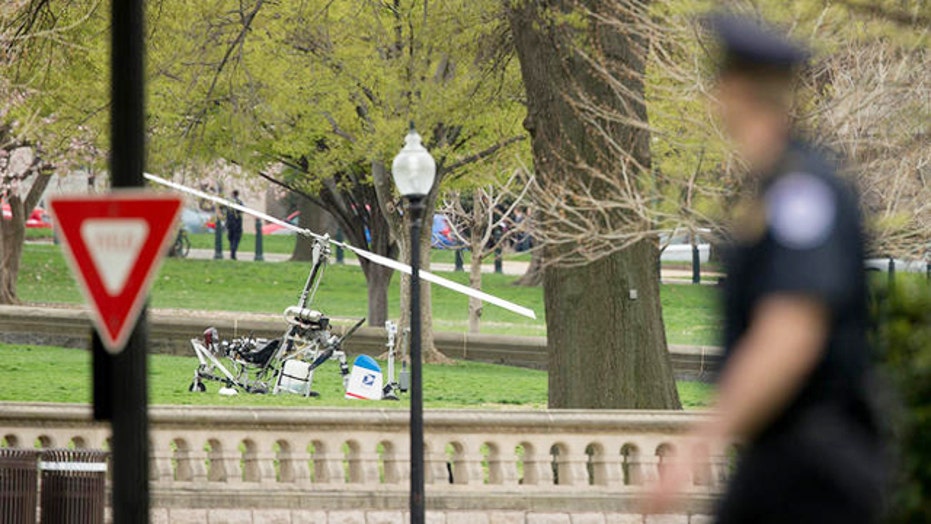 Look. Up in the sky. It's a bird. It's a plane. It's a kite. It's a balloon. It's a "low-altitude and slow-speed aerial vehicle." It's a gyrocopter. It's a mailman. Or a terrorist?

Can you tell the difference? Well, those charged with protecting the Capitol can't tell either.

That became evident at Wednesday's House Oversight Committee hearing probing the gyrocopter incursion at the Capitol earlier this month. And believe it or not, birds, planes, kites, balloons, weather systems and a "low-altitude and slow-speed aerial vehicle" are the slate of possibilities through which authorities must sift when determining if a bogey poses an actual threat -- or is merely a special delivery to Capitol Hill via gyrocopter.

"Gy .. Gyro .. Gyro ... Gyrocopter," stammered Rep. Elijah Cummings, the top Democrat on the House panel, almost incredulous that the greatest liability in the American threat matrix is a flying jalopy.

And yet, nearly 14 years after Sept. 11, a "low-altitude and slow speed aerial vehicle," as Gortney put it, may pose the quintessential menace to Washington.

"The incident on April 15 reminds us all of the greatest asset of the Capitol -- openness and accessibility -- can at times be its greatest liability," said Irving.

"Discussing classified but extremely sensitive national security capabilities in an open forum could be exploited by potential adversaries," protested Gortney. "I am happy to provide a more in-depth analysis of this event in a closed session."

"The last thing we want to do is give a roadmap," concurred Cummings. "We do not want to highlight security vulnerabilities. Bet your bottom dollar [terrorists are] watching."

There is a big, big problem and no one knows exactly how to fix it.

"A postal worker -- hello -- was able to fly through restrictive airspace," said Cummings.

It all starts with the tracking. That's the FAA's responsibility, along with NORAD.

"Radar picks up everything. Anything that's moving," said the FAA's Huerta. "Flocks of birds. Weather events. Occasional kites or balloons."

Thus the problem. Huerta says the FAA "filters" its radar to spy blips which may be worth their time.

"Air traffic controllers could not do their jobs if they had to work with an unfiltered radar screen," said Huerta.

So they cut through the mélange. Huerta says only later did a forensic analysis reveal an "irregular symbol" popping up on the feed.

"We now believe that unidentified radar element was Mr. [Doug] Hughes's gyrocopter," said Huerta. "It appeared and disappeared. It had more in common with a weather system."

"We did not have a detection," said Gortney.

The admiral described picking up a craft such as a gyrocopter as "working against physics" because of its small size. He described that as a "technical and operational challenge."

But what happened when the gyrocopter hung a left near the Kennedy Center along the Potomac River and flew just above the Lincoln Memorial? Park Police Chief Robert MacLean says one of his officers spied the craft and radioed it in. Another officer followed the gyrocopter to the Capitol grounds.

Then comes the issue of what to do about such a foray. NORAD's Gortney testified that he has the authority to make the call to shoot down an encroaching aircraft. But of course, that's contingent upon picking up the threat, having the time to respond and assessing the right course of action.

"If this gentleman wanted to, could he have crashed [the gyrocopter] into the Capitol?" asked Rep. Mick Mulvaney, R-S.C.

So the question moved to the final line of defense: the U.S. Capitol Police, patrolling the grounds. Cummings and Oversight Committee Chairman Jason Chaffetz, R-Utah, pressed U.S. Capitol Police Chief Kim Dine on whether his officers could have taken out the gyrocopter had it flown just a few more yards toward the Speaker's Balcony.

"We have the capability to do what we need to do," testified Dine.

But later, the chief seemed to contradict himself.

"They did not have the ability to [shoot it] based on the proximity to people," said Dine.

"It's a split-second to make that decision."

A bewildered Chaffetz asked Dine when exactly police trained weapons on Hughes. Dine said that happened "as he landed."

"We need to get further clarification on that," fumed Chaffetz, noting that Dine told him in a closed-door meeting that the cops had guns on Hughes long before he got to the ground.

In his opening remarks, Sergeant at Arms Paul Irving indicated that officials would "always learn lessons from each event, positive and negative." Rep. Stephen Lynch, D-Mass., wondered if that was true.

"Is there anything we do differently if something nefarious or a terrorist were to land?" asked Lynch.

An uncomfortable silence descended upon the witness table for several seconds. Not a single person replied.

The reticence was too much for Elijah Cummings.

"This is getting to be very painful," said Cummings. "The silence was chilling. I do need to know a yes or no. Have we done things now that put us in a better position than where we were on the day of this event? And I don't want silence. It's not good enough."

"The answer is yes," piped up Dine. "That's been a team effort."

During the course of the hearing, lawmakers tagged gyrocopter pilot Doug Hughes with various sobriquets. Chaffetz characterized Hughes as a "yahoo," a "dude" and a "nutjob." Cartwright declared him a "knucklehead." Rep. Tim Walberg, R-Mich., decried Hughes as a "crackpot." Hughes even described himself as "crazy."

It doesn't matter what you call him or it now. The real problem is when the threat arrives at the doorstep of the Capitol and it's only known as "terrorist."