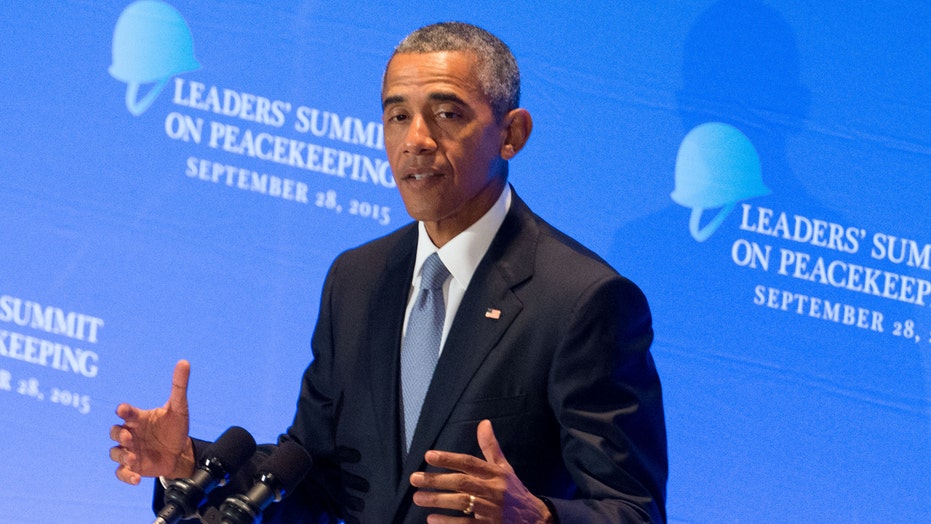 The defense policy bill is one of the few bipartisan measures in Congress that has readily become law for more than a half-century. Not so fast this year, as President Obama threatens to veto the bill moving through the House amid a bitter dispute about government spending.

The argument is whether Congress should break through spending caps when it comes to defense, but adhere to them for domestic agencies. Obama and his Democratic supporters say no. Republicans, citing global threats around the world, say yes.

The $612 billion defense policy bill for next year gives Obama the increase in funding he requested, but he's unhappy with the way lawmakers did it. They increased defense spending by padding a war-fighting account with an extra $38.3 billion. That account -- for Overseas Contingency Operations, or OCO -- is not subject to the caps.

The House is scheduled to vote on the bill Thursday.

Among other things, the bill maintains restrictions on transferring terror suspects out of the military prison at Guantanamo Bay, Cuba; provides a 1.3 percent pay increase to service members; authorizes lethal assistance to Ukraine forces fighting Russian-backed rebels; extends the ban on torture to the CIA; and authorizes the president's request of $715 million to help Iraqi forces fight Islamic State militants.

Defense Secretary Ash Carter told reporters on Wednesday that he wants Obama to veto it.

"Attempts to evade the question of overall fiscal responsibility with the so-called OCO gimmick ... is objectionable to me and to others in other agencies, and I think ought to be to the taxpayer, and certainly to the warfighter," Carter told reporters.

"It is unbelievable to me that an American president would threaten to veto a defense bill that supports our troops and gives him additional tools to use against aggressors, especially at a time when the world situation is spiraling out of control from Eastern Europe to the Middle East and South Asia," Thornberry said.

Thornberry and Sen. John McCain, R-Ariz., chairman of the Senate Armed Services Committee, both acknowledge that the legislation does not solve the spending cap issue, but they insist the budget fight should be fought on an appropriations bill, not a policy bill.

No vote has yet been scheduled in the Senate.

"It does not spend a dollar and it certainly cannot raise the budget caps or deliver an agreement to fund the government," McCain said. "It is absurd to veto the NDAA for something that the NDAA cannot do."

Many defense programs depend on multiyear authorizations to allow for long-term planning and future needs and should not be subject to year-to-year changes in the war-fighting account, Reed said. Moreover, other programs that address national security funded through other agencies, such as the Homeland Security Department, would remain subject to the spending caps.