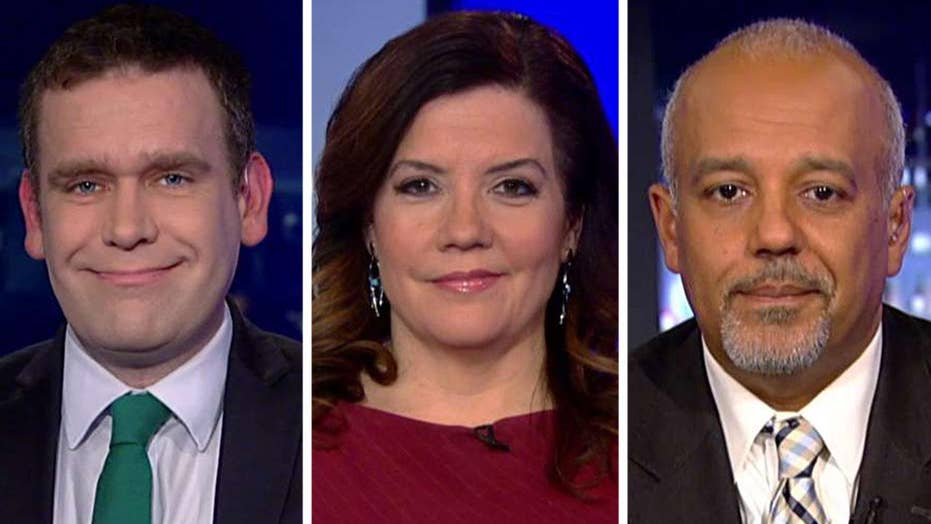 The politics of House Democrats' struggle with an anti-Semitism resolution

After several days of infighting and a near-rebellion by rank-and-file Democrats, as well as a major last-minute revision, the House on Thursday overwhelmingly passed a bipartisan resolution that only indirectly condemned Minnesota Democratic Rep. Ilhan Omar's repeated 'anti-Semitic' and 'pernicious' comments -- without mentioning her by name.

The final vote was 407 to 23, with 23 Republicans voting no, and all Democrats, including Omar, voting yes. Iowa GOP Rep. Steve King, who faced his own bipartisan blowback for comments purportedly defending white nationalists, voted present.

The final draft of the resolution was expanded Thursday afternoon to condemn virtually all forms of bigotry, including white supremacy, in what Republicans characterized as a cynical ploy to distract from Omar's remarks. Texas Republican Rep. Louie Gohmert, speaking on the House floor to announce that he would vote against the resolution, remarked, "Now [the resolution] condemns just about everything. ... Hatred for Israel is a special kind of hatred. It should never be watered down."

“Today’s resolution vote was a sham put forward by Democrats to avoid condemning one of their own and denouncing vile anti-Semitism," Cheney said in a statement. “While I stand whole heartedly against discrimination outlined in this resolution, the language before the House today did not address the issue that is front and center."

Cheney called Thursday "a sad day for the House" and called for Omar's removal from the House Foreign Affairs Committee, just as Republicans stripped King of his committee assignments in January. (The House did not specifically name King in a bipartisan disapproval measure that followed his comments on white nationalism.)

And Rep. Zeldin, who is Jewish, issued a fiery condemnation of the resolution on the House floor, calling it a "watered down" resolution that was both "spineless" and "disgusting."

The lead-up to the vote on the resolution to condemn all "forms of hatred" exposed a growing rift between House Speaker Nancy Pelosi, D-Calif., and the far-left progressive freshman contingent -- including not only Omar, but also Alexandria Ocasio-Cortez, D-N.Y., Rashida Tlaib, D-Mich., and others -- that has emerged as a major challenge to her control over the House.

During debate on the House floor over the resolution, Rep. Ted Deutch, a Florida Democrat, slammed his party's leaders for hesitating to sharply condemn Omar, and remarked that supporting language condemning anti-Semitism "shouldn’t be this hard."

Omar, peppered with reporters' questions as she left the House chamber following the vote, did not offer any comment.

Ocasio-Cortez, for her part, told Fox News that Democratic women of color "are being treated differently" and "targeted."

“Today is historic on many fronts," the representatives said. "It’s the first time we have voted on a resolution condemning Anti-Muslim bigotry in our nation’s history. Anti-Muslim crimes have increased 99% from 2014-2016 and are still on the rise.

“We are tremendously proud to be part of a body that has put forth a condemnation of all forms of bigotry including anti-Semitism, racism, and white supremacy," the statement continues. "At a time when extremism is on the rise, we must explicitly denounce religious intolerance of all kinds and acknowledge the pain felt by all communities. Our nation is having a difficult conversation and we believe this is great progress.”

Tensions have run high among Democrats in recent days. Apparently fed up with her party's inability to come together to condemn anti-Semitism in the past week, Pelosi reportedly even dropped her microphone and stormed out of a meeting with junior Democrats on Wednesday, amid fierce disputes over the planning and wording of the resolution.

And, on Thursday, Pelosi offered something of a strained excuse for the 37-year-old Omar, saying at a news conference, “I do not believe that she understood the full weight of the words.”

The final text of the resolution reflected the Democrats' deep internal divisions on the matter. It began by rejecting the "perpetuation of anti-Semitic stereotypes in the United States and around the world, including the pernicious myth of dual loyalty and foreign allegiance, especially in the context of support for the United States-Israel alliance."

Although the resolution stops short of using Omar's name, that provision was a transparent reference to her remarks at a progressive Washington cafe last week, in which she suggested that Israel supporters were pushing for U.S. politicians to declare "allegiance" to Israel.

The accusation that Jewish politicians could be vulnerable to having "dual loyalties" has been made for centuries in various contexts, and has been seen widely as a religious-based attack intent on undermining their leadership. Tlaib, who was seated next to Omar during her comments at the cafe, made a similar comment in January, tweeting that Senate Republicans were more loyal to Israel than to their own country.

Rep. Rashida Tlaib, D-Mich., speaks at a news conference on Capitol Hill in Washington, Thursday, Jan. 17, 2019, to unveil the "Immediate Financial Relief for Federal Employees Act" bill which would give zero interest loans for up to $6,000 to employees impacted by the government shutdown and any future shutdowns. (AP Photo/Andrew Harnik)

The resolution also “condemns anti-Semitic acts and statements as hateful expressions of intolerance that are contradictory to the values that define the people of the United States.”

Last month, Omar ignited a bipartisan uproar across the country when she suggested on Twitter that some members of Congress have been paid by the American Israel Public Affairs Committee to support Israel. AIPAC is a nonprofit organization that works to influence U.S. policy. ("Let me be really clear," New York City Mayor Bill de Blasio, a Democrat, said. "Suggesting that support for Israel is beholden to a foreign power is absolutely unacceptable and illogical too.")

Fox News had been told the Democratic caucus was concerned about mentioning Omar by name -- a non-starter for many members of the Congressional Black Caucus. Two knowledgable sources said such a scenario could increase security threats against Omar, who is Muslim.

But, Democrats went to great lengths to broaden the resolution's focus far beyond Omar's comments. A vote on the resolution was delayed briefly to add a new clause condemning other forms of bigotry, reportedly in response to concerns from members representing minority groups who felt left out.

“I do not believe that she understood the full weight of the words.”

Specifically, the new clause stated: "Whereas white supremacists in the United States have exploited and continue to exploit bigotry and weaponize hate for political gain, targeting traditionally persecuted peoples, including African Americans, Latinos, Native Americans, Asian Americans and Pacific Islanders and other people of color, Jews, Muslims, Hindus, Sikhs, the LGBTQ community, immigrants, and others with verbal attacks, incitement, and violence."

Conservative commentators mocked the dramatic, seemingly limitless expansion of the language, with Ben Shapiro writing, "This resolution must not pass until it includes condemnation of hatred against the disabled."

The resolution also "condemns anti-Muslim discrimination and 23 bigotry against all minorities as contrary to the values of the United States."

It further "encourages all public officials to confront the reality of anti-Semitism, Islamophobia, racism, and other forms of bigotry, as well as historical struggles against them, to ensure that the United States will live up to the transcendent principles of tolerance, religious freedom, and equal protection as embodied in the Declaration of Independence and the first and amendments to the Constitution."

Many 2020 Democratic hopefuls, meanwhile, lined up to support Omar -- including Bernie Sanders and Elizabeth Warren. Others have preferred to duck the issue.

Asked about Omar at a news conference Thursday, Sen. Cory Booker, D-N.J., insisted he wanted to hear only "on-topic" questions about unrelated legislation -- then, receiving none, stop taking questions entirely.

Top Republicans, however, have said the line between fair criticism of Israel and outright bigotry clearly had been crossed.

"Yeah, I can understand the settlement policy is being criticized," South Carolina Republican Sen. Lindsey Graham told Fox News on Thursday. "I can understand sometimes the actions Israel takes are disproportionate. But the point is, this wasn't about Israeli policy; it was about what the Jews do -- that the Jews control the media, and the Jews used their money to buy favors. That's the oldest anti-Semitic play in the book."