Members of the House Intelligence Committee on Monday will review a report on the panel’s investigation into whether President Trump committed an impeachable act, specifically by allegedly withholding military aid to Ukraine until the country investigated former Vice President Joe Biden and his son, Fox News has confirmed.

Lawmakers will then approve the report before sending it – along with minority views – to the House Judiciary Committee, which will draft and consider articles of impeachment in the weeks ahead.

REP. DINGELL ON IMPEACHMENT PUSH: ‘NOBODY IS ABOVE THE LAW’ 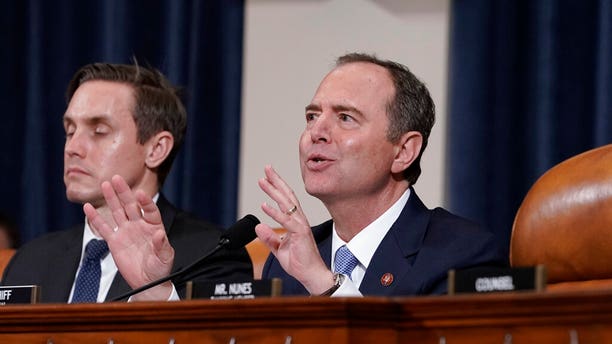 Intelligence panel Chairman Adam Schiff, D-Calif., sent a letter to his colleagues last week that report would be coming “soon” from his committee but did not provide a specific time frame.

He has also said the report would summarize the panel’s two-month investigation into President Trump and Ukraine and list the likely articles of impeachment.

The House has moved swiftly to investigate the president since Speaker Nancy Pelosi, D-Calif., announced the formalization of an impeachment inquiry in September.

This week's first impeachment hearing is scheduled for Wednesday and will feature a panel of constitutional experts who will offer what constitutes an impeachable offense.