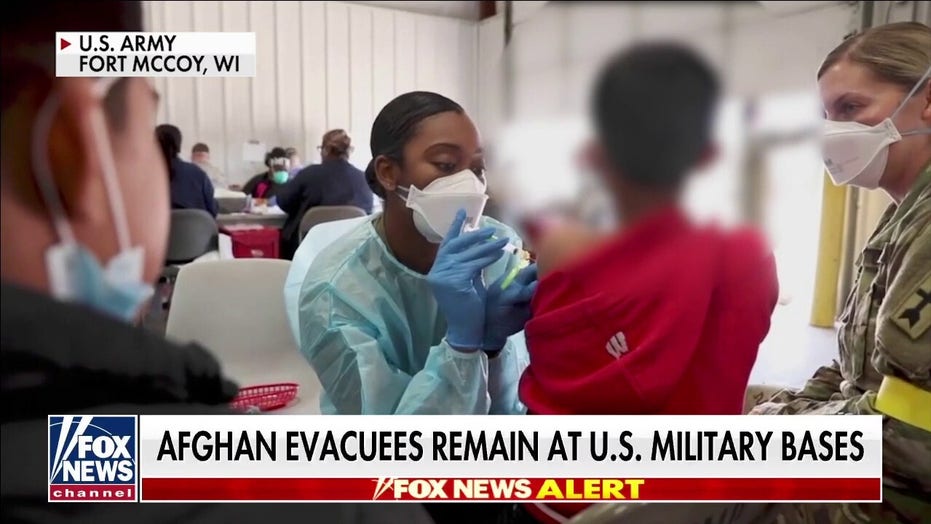 Thousands of Afghans stranded on US military bases as winter approaches

FIRST ON FOX: A new bill introduced this week by House Republicans would reclaim Congress’ authority over refugee admissions into the United States, create new forms of screening and end the Department of Homeland Security secretary’s ability to parole migrants into the U.S.

The Safeguards Ensuring Criminal and Unvetted Refugees don’t Enter (SECURE) America Act, introduced by Rep. Matt Rosendale, R-Mont., would reclaim the authority to set a yearly refugee cap from the executive, meaning that caps would be set by a joint resolution of Congress.

Under the Trump administration, the yearly cap was reduced to 15,000 and has been rapidly increased to 125,000 by the Biden administration at the same time as it has also began introducing an estimated 95,000 Afghan refugees outside of that cap.

Rosendale, speaking to Fox News, described a pendulum swing between administrations on issues like immigration and refugee admissions since Congress had given that authority to the executive.

"So there's no kind of consistency or predictability from anybody, anywhere whether we’re talking about immigration, refugee issues or just business in general and so Congress has to reclaim authority in all of these areas," he said.

"When we’re looking at the invasion that has taken place in our country over the last 10 months, immigration is a big part of that," he said.

The bill would also rescind the authority of DHS to parole refugees and migrants into the U.S. While parole is supposed to be used on a case-by-case basis for urgent humanitarian purposes or significant public benefit, it has been used broadly by the Biden administration to allow in tens of thousands of Afghans. Fox News reported Wednesday that it is also being used broadly at the southern border, with more than 30,000 migrants paroled since August.

The bill would also introduce extra vetting requirements, including that the Homeland Security secretary, FBI director and director of national intelligence all certify that a refugee is not a threat to national security. The screening would also include an "assimilation likelihood screening" to ensure that those coming in hold views compatible with the U.S. and do not support religious violence or a separate system of religious law.

It comes amid fears about vetting that have been raised by Republicans and fueled by a number of allegations of criminal activity on military bases where Afghans are held. Administration officials have defended what they described as a "multi-layered" system and have noted that the level of criminal activity is lower than that of the general population, given the number of refugees that are located on base.

"We screen and vet individuals before they board planes to travel to the United States and that screening and vetting process is an ongoing one and multilayered," DHS Secretary Alejandro Mayorkas said last month.

A White House official told Fox News that screening and security are conducted by intelligence, law enforcement and counterterrorism officials from multiple agencies.

Rosendale had been an early critic of efforts to resettle Afghans in the U.S., and was one of the first Republicans to oppose them being moved into his home state.

"This is why I spoke out even before the withdrawal began, you could see it looming on the horizon that this administration was going to use this as an excuse to bring in hundreds of thousands of people out of Afghanistan and try to relocate them into the United States without proper vetting," he said.

The bill would also move power to the states by giving governors or chief executives 30 days notice prior to refugees being resettled in their state and give them the authority to reject any planned refugee moves to their states. It would also require that any refugee who commits a violent crime be ordered removed from the country.

The bill, which includes more than a dozen co-sponsors, including Rep. Tom Tiffany, R-Wis., Lance Gooden, R-Texas, Bob Good, R-Va., and Mary Miller, R-Ill., is the latest effort by Republicans on the refugee issue.

Last week, House Republicans on the Oversight Committee called for the DHS Office of Inspector General to investigate the processes behind the Afghan withdrawal effort. The OIG said it does not confirm or deny if an investigation is underway.