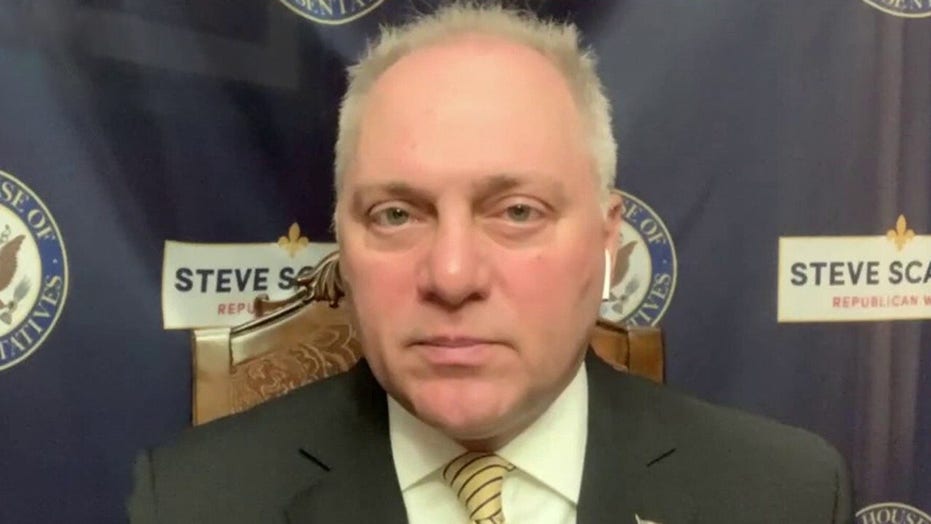 Rep. Scalise: Unbelievable that mayors will sit and watch their cities burn

The House Democrats' campaign arm filed an ethics complaint against Rep. Steve Scalise after a controversy earlier this week over a video he posted that included an edited conversation Joe Biden had with activist Ady Barkan about police funding. The video edited a question Barkan was asking Biden about redistributing police funding to add the words "for police" that Barkan had said at another point in the conversation (when he asked Biden if he agreed "we can redirect some of the funding" for police to things like social services).

The question, to which Biden answered, "Yes, absolutely," happened during a conversation that was explicitly about police funding.

The exchange ‒ in which Biden answered affirmatively to a question about taking funding from police departments and using it for other purposes ‒ became a major talking point for Republicans who have sought to include Biden with the significant number of Democrats who have in fact called for defunding police.

Biden and his campaign both at the time and now maintain that Biden does not want to cut police funding, despite the off-the-cuff answer. Biden has not only opposed defunding police but has called for increased funding for police for "community policing."

"Representative Scalise’s conduct flies in the face of express guidance, issued by the House Ethics Committee in January, that warned Members not to do precisely what he did," The Democratic Congressional Campaign Committee (DCCC) said in a statement.

It added: "By ignoring the Committee’s direct instructions, taking advantage of an unelected citizen’s disability, abusing official resources for political purposes, and continuing to justify his outrageous conduct, Representative Scalise has brought discredit on the U.S. House of Representatives and violated multiple laws, rules and standards of conduct."

Scalise, R-La., maintains that the video was not deceptively edited as it did not meaningfully change the content of the conversation.

WHERE ARE THE RIOTERS COMING FROM? DATA SHOWS MIX OF LOCALS AND OUT-OF-STATERS CONVERGING ON CITIES

"While Joe Biden clearly said 'yes,' twice, to the question of his support to redirect money away from police, we will honor the request of @AdyBarkan and remove the portion of his interview from our video," Scalise tweeted Monday.

Scalise spokesperson Lauren Fine told The Washington Post that the words were added on to the end of Barkan's question "for clarity" in the video that was cut from a longer interview. Fine said such edits are "common practice" in such videos for television and social media, where it's important to get "the essence" of a longer exchange into a short clip.

"We believe Biden’s position and answer is clear regardless," Fine said. "When asked twice, he says ‘yes’ he is open to redirecting funding away from the police, and that is clear in our video."

Fine added Thursday: "No ethics rule was violated and the intent of the video in question is accurate. It did not alter the point of the interviewer’s questions, which was to ascertain whether Vice President Biden would be open to the redirection of some police funding to other programs. This is a shameless and baseless attempt by Democrats to distract from the fact their nominee answered in the affirmative twice on camera when asked if he was open to the redirection of some police funding."

Twitter had marked the video as doctored before Scalise removed it. Biden, Barkan and House Speaker Nancy Pelosi, D-Calif., all condemned Scalise over the video.

"These are not my words. I have lost my ability to speak, but not my agency or my thoughts," Barkan, who has ALS and speaks through computerized voice assistance, tweeted in reaction to the video on Sunday night. "You and your team have doctored my words for your own political gain. Please remove this video immediately. You owe the entire disability community an apology."

Added Biden: "This video is doctored — and a flagrant attempt to spread misinformation at the expense of a man who uses assistive technology. It should be removed. Now."

Pelosi also called on Scalise to apologize to Barkan and accused him of "trying to steal Ady's words by lying."

The controversy over the Scalise video comes as support for police continues to be a hot topic amid protests against racism and police brutality. There have also been riots in many cities that have stemmed from the protests, often after dark and agitated by out-of-state actors who travel for such riots.

Biden has repeatedly condemned the rioting since May, though not as often or vocally as President Trump, who has made the violence a major campaign issue. After the violence was hardly mentioned at the Democratic National Convention (DNC) and further riots hit Kenosha, Wis., as well as Washington, D.C. and Minneapolis, the Biden campaign is amplifying its condemnations of the violence as part of a $45 million ad blitz. One ad being run in swing states, in addition to emphasizing that "rioting is not protesting, looting is not protesting," blames the unrest on Trump.

"Fires are burning and we have a president who fans the flames," Biden says in the ad, which was adapted from a speech he made in Pittsburgh. "He can't stop the violence because for years he's fomented it."