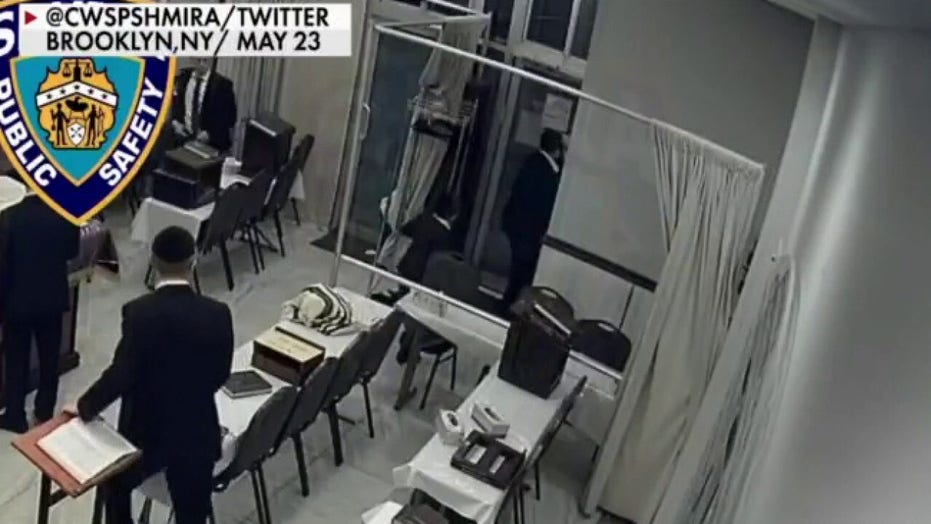 EXCLUSIVE: A survivor of the Holocaust spoke out against a spate of anti-Semitic attacks in America, saying that Jewish people need to come together in solidarity against the hate.

In 1941, when he was just one and a half years old, Sami Steigmann and his parents were deported by the Romanian government and put into the Mogilev-Podolsky labor camp in an area of Ukraine known as Transnistria.

"Being so young, a year and a half, I obviously could not work. And most of the kids did not survive," Steigmann said in an exclusive interview with Fox News. "So if you will ask any survivor ‘how come you are alive today,’ everybody will use only one word, and that is ‘luck.’"

"My luck was that I was never separated from my parents," Steigmann continued. "[The Nazis] did medical experiments on me and the side effects, I felt them all my life, every second, and I will feel them for the rest of my life."

US SEEING WAVE OF ‘TEXTBOOK ANTI-SEMITISM’ AMID ISRAEL-GAZA TENSIONS

Sami Steigmann and his parents were deported in 1941 by the Romanian government and put into a labor camp in Ukraine. (Holocaust & Human Rights Education Center)

Steigmann, a motivational speaker who has made it his life’s mission to educate people through EMET – an acronym standing for "Educate, Motivate, Empower and Tolerance" that is also the Hebrew word for "truth" – said the nation has a "problem with anti-Semitism" and warned that "the cry ‘Never again’ is happening again."

"We have to face something that we never have before, and it’s something that causes it, the anti-Semitism, to be as powerful as it is, and that is social media," Steigmann said. "We have, right now, big high-tech companies that not only can, but they do control who says what. If they don't like what you have to say, they can delete your account and ‘put you in jail.’"

"At the same time, they decide what is called incitement and what is hate speech," Steigmann continued. "In reality, they are infringing on free speech, and I do not see, with the present administration, that these companies will be contained. I don't even see it for the foreseeable future."

Steigmann said that Jewish people around America "are not the people that protest nationwide," rather they are in the "background," and are "not united" in pushing back against anti-Semitism in America.

"We have to do something [like] what BLM does," Steigmann said, adding that he does not associate himself with the Black Lives Matter organization and saying the group is "anti-Semitic."

"However, I do concur with the BLM movement['s tactics]," he continued. "Take a look: they demonstrated nationwide. The media was there."

"And it became a worldwide phenomenon," Steigmann said, adding, "That's what the Jews have to do" in a non-violent style similar to civil rights activist Dr. Martin Luther King, Jr.'s forms of protest.

Steigmann lambasted the media for being "silent" on the rise of anti-Semitism and said that Jewish people around the nation need to "march nationwide and to bring the media."

"The media is not supporting the fight against anti-Semitism," he said, adding that the media is "extremely influential" and that people use the "slogans" they see on TV and other outlets.

The Holocaust survivor said the charges by progressives that migrant holding facilities along the southern border are "concentration camps" is a "lie" and that people need to stand up to those who peddle lies.

"There are no concentration camps in this country," he said. "If you want to make a comparison, compare it to the DP camps — displaced people."

"These are the camps liberated by the Allies, Americans, British, Russians, Australians. People had to be in those camps for three to five years. They had no place to go."

"Although life in the DP camps was very difficult, there was one thing that was missing. And that was the threat of being killed," Steigmann explained. "So therefore, and the person who said it is a leader of this country and has a large following, is perpetuating false narratives."

Progressive firebrand Rep. Alexandria Ocasio-Cortez, D-N.Y., claimed in 2019 that the U.S. was "running concentration camps along the southern border."

"Somebody else, also a leader in this country, said the Holocaust is happening in this world," Steigmann said. "That is another lie. There is a difference between genocide – which is happening – and Holocaust."

Steigmann, who is an Israeli citizen, said that anti-Semitism has "taken another form" and morphed into anti-Israel sentiments and "anti-Zionism." He also said there is a difference between criticizing Israeli government policy and saying the state of Israel should not exist.

Additionally, Steigmann said that the "only way to make a difference in this world is through education" and warned that the Boycott, Divestment, Sanctions (BDS) movement is going to schools, where "there is no education," only "indoctrination."

For three years, until 1944, Steigmann and his family endured the horrors of the Holocaust in Mogilev-Podolsky until the Red Army liberated the camp. Steigmann nearly perished from starvation, but was saved by a German who delivered food to the Nazis.

The German woman, whom Steigmann never met, gave the infant Steigmann food after seeing him exhibiting the physical signs of starvation, such as a distended stomach and swollen feet.

"She had compassion for a stranger, for a Jewish kid, and she decided to give me love," he said. "But I want for people to understand, people that save strangers — I specifically do not use the word ‘Jews’ because other people were also saved — are called the Righteous Among the Nations."

"Because she did not risk only her own life, she risked the life of her entire family," Steigmann said.

In 1946, the Romanian government allowed a small group of Jewish people to repatriate into the country, and Steigmann's father, an "anti-communist," took the opportunity. Steigmann's family moved to Israel in 1961 before Steigmann came to America on his own "without money and without a language" in 1968. He learned English through television commercials and conversations, he said.

Being only a year and a half while in Mogilev-Podolsky, Steigmann does not have much memory of his time in the camp. He was not told by his family of the medical experimentation by the Nazis until 1971, as his parents, like other Holocaust survivors, "felt guilty, ashamed and like victims, and they wanted the children to grow up a normal life, not to be burdened by those horror stories."

Steigmann's comments come as the nation faces a steep rise in anti-Semitism after the latest conflict between Israeli military forces and the Gaza-based group Hamas last month.

Multiple progressive lawmakers have attacked Israel in the wake of the conflict, which saw thousands of missiles fly indiscriminately from Gaza into Jerusalem and Tel Aviv, with some – such as Ocasio-Cortez – calling Israel, the only democracy in the Middle East, an "apartheid state."

American Jews and their communities across the country from New York City to Los Angeles have been targeted by anti-Semitic attacks in the wake of the conflict, which saw synagogues defaced, slurs thrown and people viciously beaten while simply eating at restaurants.

Black Lives Matter did not immediately respond to Fox News' request for comment.