Holder notified of Petraeus probe in late summer -- did he tell anyone? 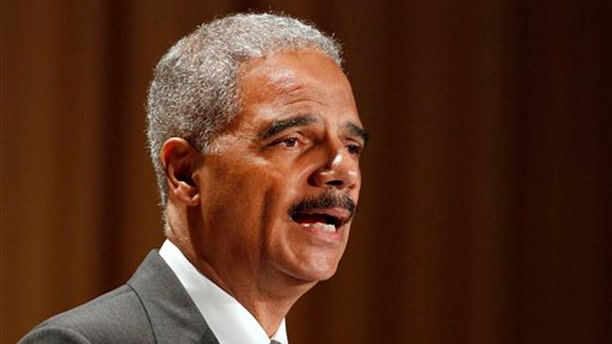 Attorney General Eric Holder was notified in late summer that then-CIA Director David Petraeus' name had surfaced in the FBI probe that ultimately uncovered Petraeus' affair, raising questions about whether Holder would have -- or should have -- informed President Obama.

According to the administration's version of events, the president did not find out about the situation until last Thursday. At the time that Holder was notified, months earlier, many details were still unknown. Petraeus himself was not interviewed until the fall. And according to one source, it is long-standing FBI policy for the FBI not to brief Congress or the White House in the middle of a criminal probe that does not involve a security threat.

However, several lawmakers and other officials say the mere fact that Petraeus was flagged in an investigation should have been reason enough to kick the issue up from the Justice Department to the White House.

"He was the director of the CIA, not Fish & Wildlife. The implications are massive," Rep. Jason Chaffetz, R-Utah, told FoxNews.com in an email. Chaffetz said the heads of the House and Senate intelligence committees should have been looped in. "Notification should have also gone to the president -- immediately," Chaffetz said.

Top congressional lawmakers, including the leaders of key committees, have raised concerns that they weren't notified earlier.

But John Bolton, former U.S. ambassador to the U.N. under the George W. Bush administration, said the bigger question surrounds whether the White House was notified.

"The idea that the White House didn't learn of this potential problem until Election Day, I just find incomprehensible. Did the attorney general sit on this information for two months?" he asked. Bolton said it raises the question "of whether the information was suppressed."

The Justice Department declined to comment for this story.

The law states that intelligence officials "shall" notify the congressional intelligence committees of "all intelligence activities." It could be argued that this didn't rise to such a level, technically. After all, Fox News confirms that when mistress Paula Broadwell's second and final interview with the FBI was conducted the Friday before the election, they were able to formally conclude no crimes had been committed. While some classified documents were found on her computer, there was no information indicating Petraeus was the source.

Further, according to the Wall Street Journal, a 2007 memo from then-Attorney General Michael Mukasey said Justice employees were not supposed to tell the White House or Congress about pending criminal investigations.

But Tom Dupree, former deputy assistant attorney general under George W. Bush, suggested the unique nature of this situation should have been a flag to notify at least Congress -- and perhaps the White House.

Meanwhile, details continue to emerge about the chain of events that triggered the probe that ultimately uncovered Petraeus' affair. Fox News has learned it started with harassing emails sent from dummy accounts operated by Petraeus' mistress.

The new details help clarify the somewhat confusing narrative regarding how the head of the CIA ended up in the FBI's crosshairs in the first place. Fox News confirmed Sunday that it all started when another woman, 37-year-old Jill Kelley, a close friend of the Petraeus family, received harassing emails. She then alerted the FBI, where a friend of Kelley's works, about the emails that appeared to be an attempt to blackmail Petraeus, which started the investigation, sources said.

There were initially questions over where those emails came from, with early indications that they might not have come from Broadwell.

However, Fox News confirmed from multiple law enforcement sources that those emails came from multiple dummy accounts, which were traced back to Broadwell. The reason the FBI had jurisdiction is because cyber-harassment is a federal crime. And once the FBI got to Broadwell, they uncovered the affair.

From there, Fox News has learned, the first knowledge of the affair outside the FBI came from an agency whistle-blower who contacted a Capitol Hill Republican, who then told House Majority Leader Eric Cantor.

According to a senior administration official, Director of National Intelligence James Clapper first informed the White House about the situation last Wednesday. From there, Petraeus on Thursday morning called National Security Adviser Tom Donilon to request a meeting with Obama, who was briefed on the situation by staff later that day before taking the meeting in the afternoon.

Petraeus offered his resignation, and Obama accepted on Friday.