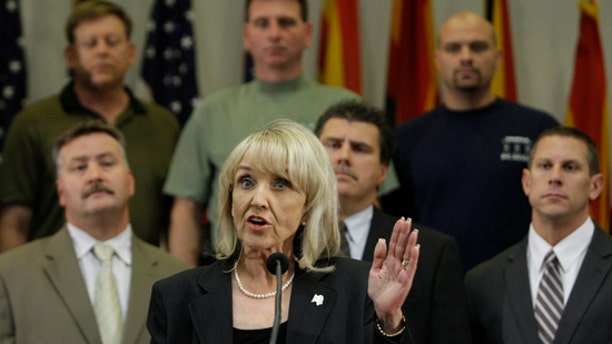 FILE: In this Apr. 23, 2010, photo, Arizona Gov. Jan Brewer talks about signing the immigration bill that is now the subject of a potential Supreme Court appeal. (AP)

The Arizona Latino Republican Association will become the first Hispanic organization in the country to actively oppose the Department of Justice's lawsuit against the state of Arizona's new immigration law.

Larry Klayman, founder of Freedom Watch, Inc., said he will be joined by ALRA Chairman Jesse Hernandez and members of the Phoenix Law Enforcement Association at an announcement Thursday morning in Phoenix.

ALRA will become the first group of Latino Americans to "put a foot forward legally" in support of S.B. 1070 by filing a motion to intervene against the Justice Department's lawsuit challenging Arizona's immigration policy, Klayman said.

"This is a way to tell the country that, 'Hey, we're Americans too and we believe in the rule of law," Klayman told Foxnews.com. "It's a way to say, 'We got here legally and we contributed a great deal. We want the rest of the country to recognize that we're with you' [in the national immigration debate]."

By filing the motion, Klayman said ALRA will be "in effect, a defendant" in the DOJ lawsuit, which names the state of Arizona as well as Gov. Jan Brewer as defendants. The Justice Department claims the federal government has "preeminent authority" on immigration enforcement and that the Arizona law "disrupts" that balance.

Attempts to reach Hernandez were not successful. A message seeking comment from the Department of Justice was not immediately returned.

Arizona's law, which was passed in April, requires police officers conducting traffic stops or questioning suspects about legal violations to ask about immigration status if "reasonable suspicion" exists that the individuals is in the country illegally.  Critics have said the law will lead to racial profiling.

Rep. Steve Montenegro, R-Ariz., the youngest member of the state's legislature, was the only Hispanic to vote in support of Arizona's new law. As the son of immigrants who came to the U.S. legally, Montenegro became a citizen at age 18 and has repeatedly voiced his support of S.B. 1070.

"America is a not a race," Montenegro told Fox News. "The United States of America is not the color of your skin, it is the way you think, the way you see life."

On officially becoming a U.S. citizen, Montenegro said, "When you finally reach that day, you understand that being an American is a responsibility, not just an entitlement."