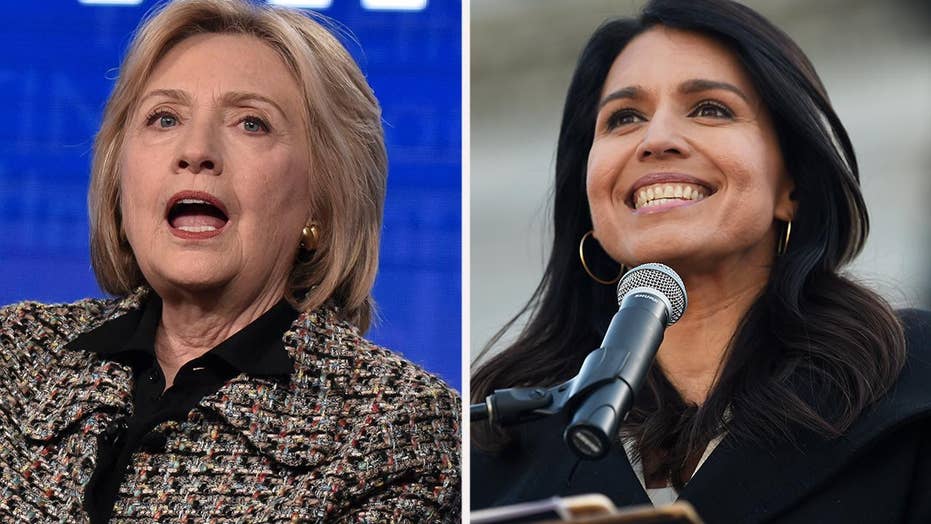 Hillary Clinton or her representatives have, on at least two occasions, declined to accept legal papers delivered in connection with Tulsi Gabbard’s lawsuit against her, Gabbard’s attorney claims.

Gabbard, a Democratic congresswoman from Hawaii who is seeking the party's 2020 presidential nomination, filed a $50 million lawsuit against Clinton last week over the former secretary of state’s insinuation that Gabbard was a “Russian asset.”

Brian Dunne, an attorney representing Gabbard, told the New York Post that Secret Service agents turned away a process server Tuesday when the server tried to deliver the lawsuit to Clinton’s home in Chappaqua, N.Y., north of New York City.

Dunne said the server was instructed instead to deliver the papers to the Washington office of Clinton’s lawyer, David Kendall, but Kendall’s firm, Williams & Connolly, also declined to accept the legal papers, according to the Post.

“I find it rather unbelievable that Hillary Clinton is so intimidated by Tulsi Gabbard that she won’t accept service of process,” Dunne told the newspaper. “But I guess here we are.”

“I find it rather unbelievable that Hillary Clinton is so intimidated by Tulsi Gabbard that she won’t accept service of process. But I guess here we are.”

Dunne told the paper his team is considering what steps to take next.

During a Jan. 23 appearance on "Fox & Friends," Gabbard accused Clinton of using “smear tactics” against her in an attempt to suppress her freedom of speech.

“I have dedicated my entire adult life to serving our country,” said Gabbard, 38, a member of the Hawaii Army National Guard who served in Iraq before being elected to Congress in 2012, “and for Hillary Clinton and her powerful allies to attempt to smear me and accuse me -- really implying that I'm a traitor to the country that I love -- is something that I cannot allow to go unchecked."

Clinton never mentioned Gabbard by name, but when asked to confirm whether the former first lady was referring to Gabbard, Clinton spokesman Nick Merrill responded, “If the nesting doll fits … ” a reference to popular Russian dolls.

The remarks from Clinton drew immediate pushback from Gabbard on Oct. 18.

“Great! Thank you @HillaryClinton. You, the queen of warmongers, embodiment of corruption, and the personification of the rot that has sickened the Democratic Party for so long, have finally come out from behind the curtain. From the day I announced my candidacy, there has been a … concerted campaign to destroy my reputation. We wondered who was behind it and why. Now we know – it was always you, through your proxies and … powerful allies in the corporate media and war machine, afraid of the threat I pose. It’s now clear that this primary is between you and me. Don’t cowardly hide behind your proxies. Join the race directly.

Gabbard’s camp announced the lawsuit soon after the congresswoman’s Jan. 21 remarks, in which she criticized Clinton for claiming about Sen. Bernie Sanders that “nobody likes him” and that “he got nothing done” as a lawmaker.

“It’s time to grow up, you know? This isn’t high school,” Gabbard told WMUR-TV in Manchester, N.H., referring to the Clinton comments.

Gabbard had supported Sanders in the 2016 race, and visited a Sanders campaign office in Plymouth, N.H., earlier this week in what was being viewed as a sign of dealmaking among Democratic candidates as the Iowa caucuses and New Hampshire primary draw closer, The Washington Post reported.