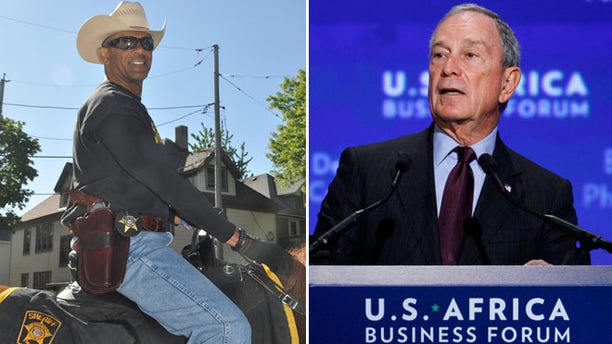 National political donors with deep pockets are spending hundreds of thousands of dollars on a local Wisconsin sheriff’s race that pits gun control groups against the National Rifle Association.

On Tuesday, voters in Milwaukee County, Wis. will decide whether they’ll give controversial Sheriff David Clarke Jr. - a staunch supporter of Second Amendment rights known for his outspoken ads -- another term in office or side with his opponent, police lieutenant Chris Moews.

Clarke made headlines last year after he spent money on a radio ad that urged citizens to enroll in firearms classes following budget cuts. He told residents in the 30-second commercial to “point that barrel center mass and pull the trigger” because “911 is not our best option.”

He also said that personal safety is no longer a spectator sport and told citizens, "I need you in the game."

The primary race is a rematch of the one four years ago in which Clarke beat Moews by six points.

Both candidates are running as Democrats. The winner moves on to the November general election. However, since no Republicans are in that contest, Tuesday’s winner will most likely become the next county sheriff.

This time, Moews is armed with money aimed at taking down the Clarke camp.

Former New York City Mayor Michael Bloomberg - who through his political group has publicly committed to spending $50 million on gun-control politics in 2014 – has paid $150,000 to air a series of television ads targeting Clarke’s conservative pro-gun policies.

The money from Bloomberg’s Independence USA super PAC is more than what Clarke and Moews have spent on their entire campaigns combined.

Bloomberg spokesman Howard Wolfson told the Wall Street Journal on Monday that he decided to get involved in the sheriff’s race because it allowed him to shape policy on a local level.

“The issue of guns is one that (Bloomberg) cares an awful lot about and there’s a very clear contrast on that issue in this race,” Wolfson told the newspaper.

But Bloomberg isn’t the only person pumping cash into the primary.

The Greater Wisconsin Committee spent $400,000 on its own anti-Clarke ads.

Clarke, who is running as a Democrat but regularly aligns himself with conservative Republicans, spoke at the National Rifle Association’s annual meeting in April. The NRA, who calls Clarke a “rising national star,” has come to Clarke’s defense, soliciting donations from its members on his behalf and buying online ads for his re-election bid.

“Make no mistake: Sheriff Clarke is fighting the reelection battle of his life right now because he dared to stand on principle by standing up for you, me and the NRA,” Chris Cox, executive director of the NRA’s Institute for Legislative Action, said.

“Am I big on a person’ right to be able to defend themselves? Yes. You know why? Because it’s a natural right,” Clarke recently told Wisconsin News Radio 620 WTMJ.

His opponent, Moews, has a different take.

“If I have the opportunity to defend myself and my family I will do so to the best of my abilities but I’m certainly also going to call 911 if I have the ability because I need the cavalry to come and help me,” Moews told WTMJ at the same political event.