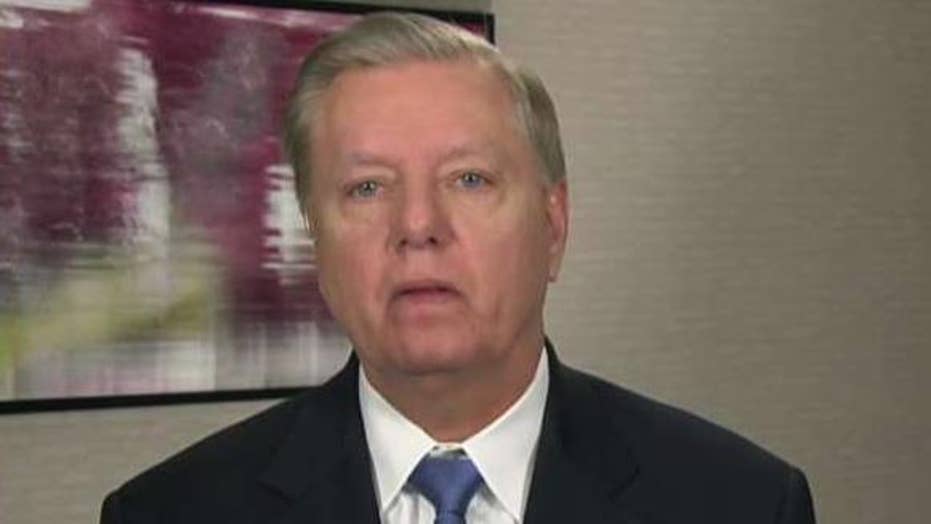 Sen. Lindsey Graham: It is a political stunt for Pelosi to not send articles to Senate

Sen. Lindsey Graham, R-S.C., insisted Sunday that if House Speaker Nancy Pelosi does not deliver articles of impeachment against President Trump to the Senate by the end of the week, the Senate should "take matters in our own hands."

Graham accused Pelosi of playing political games and trying to exert control over the Senate trial by keeping it from starting. Senate Majority Leader Mitch McConnell, R-Ky., recognized Friday on the Senate floor the chamber's rules prevented him from doing anything until Pelosi does her part, but Graham proposed a solution that could remove what McConnell has called an "impasse" in the process.

"What I would do, if she continues to refuse to send the articles as required by the Constitution, I would work with Senator McConnell to change the rules of the Senate so we could start the trial without her, if necessary," Graham proposed on "Sunday Morning Futures."

When asked how long he would wait before taking this step, Graham replied, "Days, not weeks."

Graham justified this by claiming that Pelosi was engaging in a "political stunt" by holding off on sending the impeachment articles to the Senate, weeks after they were approved by a House vote. He said McConnell would not let her dictate how events unfold.

"Well, we’re not going to let Nancy Pelosi use the rules of the Senate to her advantage. This is dangerous to the presidency as an institution," Graham said. "They impeached the president, but the speaker of the House is holding the articles back, trying to extort from the majority leader of the Senate a trial to her liking. They’re trying to hold these articles over the head of the president."

Graham laid out how he would expect the trial to go, allowing both sides to present arguments before determining whether witnesses were needed.

"We’ll use the Clinton model, where you take the record established in the House, let the House managers appointed by Pelosi make the argument, let the president make his argument why the two articles are flawed, and then we’ll decide whether we want witnesses. But this should be done in a couple of weeks," he said.

Graham expressed hope that the Senate could conclude the impeachment trial before the end of January, but reiterated that this may require the Senate to push Pelosi out of the equation.

"If we don’t get the articles this week, then we need to take matters in our own hands and change the rules, deem them to be delivered to the Senate so we can start the trial, invite the House over to participate if they would like," he said. "If they don’t come, dismiss the case and get on with governing the country."