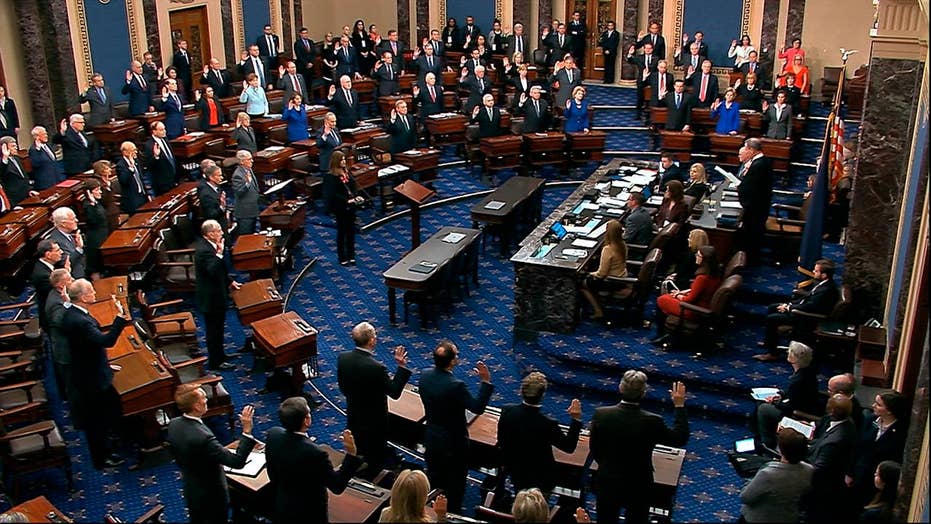 Lawmakers only allowed to drink milk and water during impeachment trial

Several Republican senators watching the ongoing impeachment trial of President Trump over the past two days have apparently been taking their mother’s advice to drink their milk.

GOP Sens. Ted Cruz of Texas, Richard Burr of North Carolina and Tom Cotton of Arkansas have all been spotted downing a glass of the dairy product while on the Senate floor.

“Cruz enjoyed a cool glass at midnight last night,” Sam Cooper, Cruz’s deputy chief of staff, tweeted on Wednesday in response to a tweet about Burr having a glass of milk. “Fun fact: the Senators have to provide their own milk to the Cloakroom (they keep it cold for you tho).”

On Wednesday, Cotton was brought a glass of milk during the trial, as well.

Why are these three senators suddenly having a craving for the dairy drink?

It’s not because the three lactose-loving lawmakers are looking to get their daily share of calcium and Vitamin D, but because they haven’t been given many beverage choices for the trial.

During an impeachment trial, senators are made to abide by a seemingly-draconian set of rules that, among other things, require them to remain silent and seated the entire time, bars them from using any electronics, and permits them to sip on either water or milk -- nothing else.

Sen. Bill Cassidy, R-La., told Bloomberg that senators were permitted to drink to keep their ulcers from flaring up.

“In the '50s, there was no medicine for ulcers but people would drink milk,” Cassidy said. “So the senators were allowed to drink milk because they had ulcers.”

Cassidy’s assertion, however, has come under question, as the calcium in milk causes the stomach to produce more acid and thus agitate an ulcer even further.

A better explanation of why milk is permitted comes from “Riddick’s Senate Procedures” -- the upper chamber of Congress’ rulebook -- which states that “Senate rules do not prohibit a Senator from sipping milk during his speech.”

Senate records indicate that in 1966, Sen. Everett Dirksen, R-Ill., asked if it would be OK to have a page bring him a glass of milk. The Senate’s presiding officer replied that there wasn’t a rule prohibiting it.

What is still unclear is what senators who are lactose-intolerant can drink. Do they have to stick with water, or is almond, soy or even coconut milk OK?