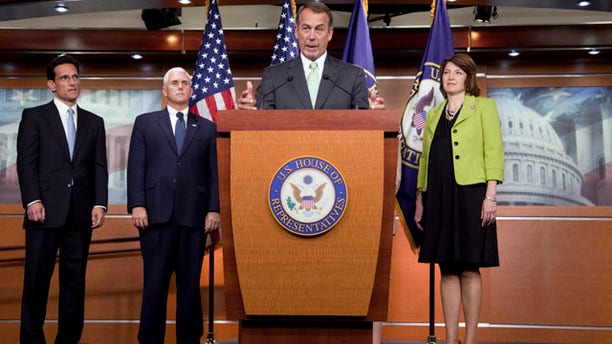 Eyeing a potential Congressional win in November, House Republicans are planning to chip away at the White House's legislative agenda—in particular the health-care law—by depriving the programs of cash.

The emerging plan has been devised in part to highlight the policy differences between the two main parties, especially over legislative achievements of the Obama administration that have proven unpopular with voters.

Republican leaders acknowledge many of these salvos will fail. At best, the party will gain a majority in the House and a razor-thin hold in the Senate in November's elections—short of what's needed to overcome a presidential veto. Analysts give the GOP a better shot at taking the House than the Senate.

But Republican lawmakers portray the anticipated drama as foreshadowing the far bigger brawl of the 2012 presidential elections and a clash of visions with President Obama. A vote in the House to repeal the health-care overhaul would be among the GOP's top priorities.

Republican leaders are also devising legislative maneuvers that might have a bigger impact, using appropriations bills and other tactics to try to undermine the administration's overhaul of health care and financial regulations and its plans to regulate greenhouse gases. GOP leaders also hope to trim spending, return unspent stimulus funds and restore sweeping tax cuts.

Business groups have compiled lists of impeding regulations they hope to see stopped under a GOP House majority.

"We need to establish the proverbial lines in the sand and show we are serious about limited government," said Wisconsin's Rep. Paul Ryan, a leading conservative who is in line to chair the House budget committee if Republicans take control.

Democrats accuse the Republicans of wanting to return to the same policies that sparked the financial crisis and helped put the country into recession. Obama has labeled Republicans as wanting to "cut more taxes for millionaires and cut more rules for corporations."

The White House concedes that Congress's withholding funds would be a threat to the health-care law, but argues such a strategy could backfire with consumers, particularly if it threatened to nix popular provisions, such as allowing children to stay on their parents' insurance plans until they turn 26.

Click here for more on this story from the Wall Street Journal.