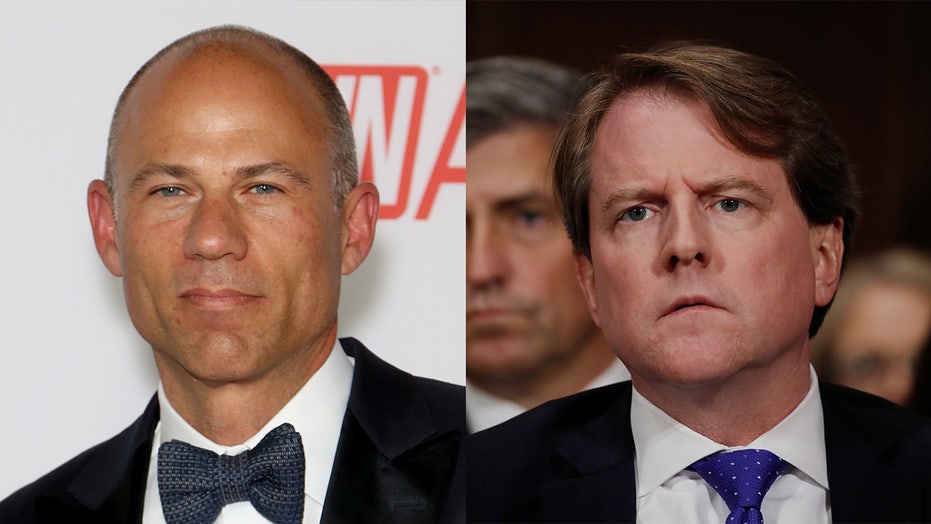 McGahn appeared with Senate Majority Leader Mitch McConnell, R-Ky., at a Federalist Society event in Kentucky where the two recounted the confirmations of Justices Neil Gorsuch and Kavanaugh. Sen. Rand Paul, R-Ky., also spoke at the event earlier in the day, which was held in the Kentucky State Capitol House Chambers.

"Between President Trump and you, there is a third person that really should get the game ball for getting Kavanaugh over the finish line," McGahn said. "It is Michael Avenatti. The day he burst on the scene, everyone -- 'oh no he’s here.' I said, 'Oh no, he’s here. This is good news.'"

The Kavanaugh confirmation process had been embroiled by last-minute accusations of sexual assault against the D.C. Circuit Court Judge by Christine Blasey Ford, a college professor from California who said Kavanaugh once drunkenly pinned her to a bed at a gathering and tried to remove her clothes, and Deborah Ramirez, a Yale classmate of Kavanaugh who said the future judge put his genitals in her face while inebriated at a dorm party. Kavanaugh denied the allegations.

Avenatti's client, Julie Swetnick, later came out as a third high-profile accuser. Swetnick claimed that she was drugged and gang-raped at a house party in suburban Maryland around 1982 at which Kavanaugh and his friend Mark Judge were present. She also said that she had seen Kavanaugh waiting outside a room for a "turn" with an intoxicated girl on another occasion and that he was "verbally abusive toward girls."

Swetnick's allegations were called "outlandish" at the time by Sen. Susan Collins, R-Maine, and Kavanaugh said the claims were fantastical.

"This is ridiculous and from the Twilight Zone," he said. "I don't know who this is, and this never happened."

Swetnick's credibility was called into question almost immediately after her sworn statement was released.

Swetnick's allegations, amplified by Avenatti during numerous cable television appearances, helped undermine the credibility of the other accusations against Kavanaugh in the minds of many Republicans as Ford and Ramirez struggled to produce corroborating evidence to support their stories.

McConnell said during his Monday appearance with McGahn that when he met with Judiciary Committee Republicans -- plus Collins and Sen. Lisa Murkowski, R-Ak. -- to decide what the scope of the FBI investigation into the sexual assault claims would be, the group decided they would ask the FBI to look into the Ford and Ramirez cases but to ignore the Swetnick allegations.

"It was agreed that anybody Dr. Ford recommended who could corroborate her story obviously needed to be talked to, there was a woman at Yale named Ramirez who had made some allegations -- talk to her and anybody she recommends," McConnell said. "This lawyer, Avenatti, who's subsequently been totally disgraced, everybody in the room said we're not interested in anybody that Avenatti claims to represent."

Earlier this year, Avenatti was hit with dozens of federal charges for allegedly stealing money from clients, dodging taxes and attempting to extort footwear giant Nike.

Kavanaugh was eventually confirmed 50-48 and sworn in on Oct. 6 of last year. The open wounds from his confirmation fight continue to follow Kavanaugh, however, as Democrats made revived calls to impeach the jurist last month after The New York Times published a piece that claimed to reveal another incident of sexual assault by Kavanaugh. The newspaper later updated the story to reflect that the alleged victim had no memory of the incident.

The hour-long conversation between McGahn and McConnell was expansive and covered Gorsuch's and Kavanaugh's nominations from beginning to end.

On the day Justice Anthony Kennedy retired, opening a spot on the court that would eventually be filled by Kavanaugh, McGahn recalled his mindset was similar to that of late Oakland Raiders owner Al Davis.

On the topic of filibusters for judicial appointments, McConnell compared the nomination and confirmation process to impeachment, which his chamber may need to take up before the end of the year if the House holds a vote.

"There’s no doubt that the confirmation process means whatever the Senate thinks at any given time," he said, "It’s much like impeachment, which is in the news now. Some people think of it as a judicial type proceeding ... It’s a political decision.”

McConnell removed the filibuster requirement for Supreme Court nominations after Democrats used it in an attempt to bog down the Gorsuch nomination.

He also credited the ferocity of Democrats' opposition to Kavanaugh with helping his party gain two Senate seats in the 2018 midterm elections as well as for solidifying votes for Kavanaugh.

"The people who were enraged about all of this were descending on the Capitol," McConnell said. "I mean they were literally getting in members' faces … and showing up in restaurants and acting out... Ironically, Don, I think it actually helped steel my members, made them even more determined. And the political irony of it all was the Democrats last fall were totally fired up. What finally got us on fire was the Kavanaugh event, it actually ended up helping us up politically."

McGahn also gave two significant behind-the-scenes tidbits on the Kavanaugh fight to the Federalist Society audience. He revealed Collins was on the verge of endorsing Kavanaugh before the Ford allegations came to light.

"I shouldn’t say this but I will," he said. "Susan Collins wanted to give a floor speech about how she really liked Kavanaugh and that week … boom [the Ford allegations came out]. When they sensed we had the votes, boom.”

On the FBI report regarding the Ford and Ramirez allegations, McGahn let audience members draw their own conclusions.

"When the report went over to the Hill and senators had a chance to look at it -- I can't get into what's in the report but it struck me the number of senators that came out and basically, essentially told you, we’re ready to vote now," he said. "Let’s go to the floor, we are feeling good, let’s vote. And that kinda tells you, without telling you what’s in the report, what’s in the report.”