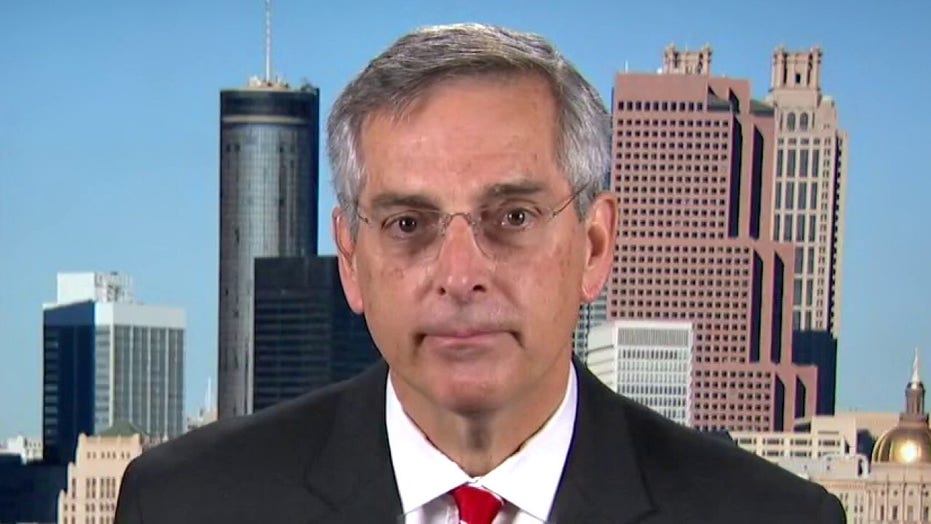 Georgia Secretary of State on presidential race: ‘The results are the results’

Georgia Secretary of State Brad Raffensperger touted his support for his state's Republican candidates for Senate -- incumbents Kelly Loeffler and David Perdue -- despite them joining President Trump in calling for his resignation after he certified President-elect Joe Biden's victory in the longtime GOP stronghold.

"I'm going to be voting for my two Republican senators, and I hope every Republican gets out to vote for our Republican senators," Raffensperger said Saturday on "Your World" with Fox News' Neil Cavuto, despite the criticism, which has even prompted physical threats to him and his family over the past four weeks.

Trump continues to fight the results of the presidential contest in Georgia, which has turned into a crucial battleground in recent years. Biden carried the state by roughly 12,000 votes in last month’s election.

The results were backed up by a manual recount mandated by state officials. A second recount requested by the president, completed Friday, didn’t alter the final result – and the election results were certified.

"As a Republican, I'm disappointed in the results, but the results have shown that the results reported on election night were supported by the audit," Raffensperger said. "The results are the results."

The secretary of state, a Republican, said he's hopeful Perdue will be able to clinch victory against his Democratic opponent Jon Ossoff in one of two crucial Georiga runoffs that will determine the balance of power in the Senate.

"Sen. David Perdue got over 19,000 votes in the metropolitan region [more] than President Trump did," Raffensperger said, referring to the Atlanta area. "Sen. Perdue was able to message to a broader coalition of voters, and he had great success. It didn't get him over the 50%, but I'm very hopeful for where he'll be on the runoff election."

Residents of an 80% pro-Trump district might not understand, "but there are other constituencies throughout the state, and you have to have a message that reaches all voters," Raffensperger added, suggesting Trump failed to do so.

Trump returned to the campaign trail Saturday for the first time since last month’s presidential election to rally on behalf of the Republican senators, who desperately need his help.

The president this week tweeted and retweeted baseless charges of voter fraud in Georgia, and has repeatedly attacked Republican Gov. Brian Kemp and Raffensperger for their refusal to reverse the election results.

"I will easily and quickly win Georgia if Governor @BrianKempGA or the Secretary of State permit a simple signature verification," Trump tweeted Saturday. "Has not been done and will show large scale discrepancies. Why are these two "Republicans" saying no? If we win Georgia, everything else falls into place."

"I've really abstained from being involved in Republican Party activities just so that the other side could never say that I was so involved that I was trying to push it one way for our party," Raffensperger said in his defense. "I'm a conservative Republican, I always have been. But I think it's best that on issues of the election, that everyone see that I just, you know, walk down that middle line."

The balance of power for the next Senate coming out of last month’s elections is 50 Republicans and 48 Democrats. That means Democrats must win both of Georgia’s runoffs for a 50-50 split. If that occurs, Vice President-elect Kamala Harris would be the tie-breaking vote, giving her party a razor-thin majority in the chamber.