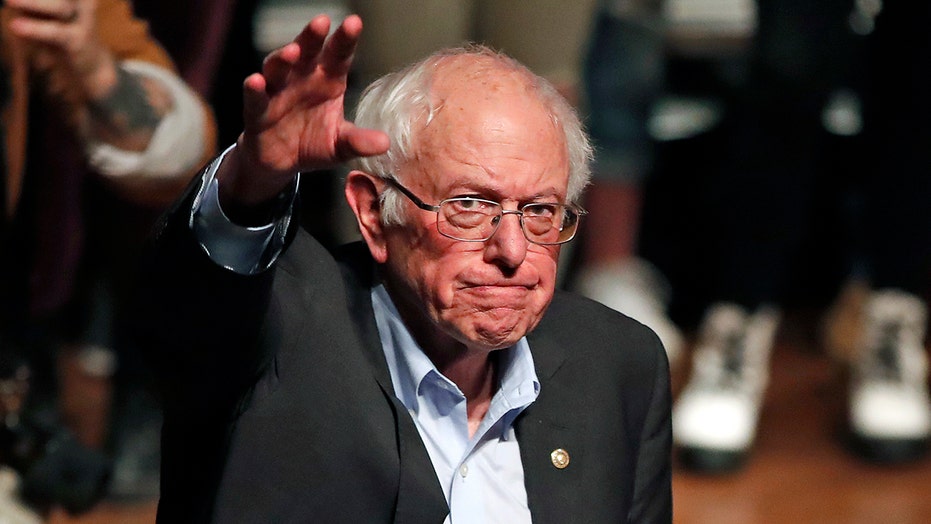 The Vermont senator holds a town hall in New Hampshire ahead of the primary. Mark Meredith reports

FROM BRYAN TO BERNIE
BEDFORD, N.H. — These Democratic candidates are not having much fun.

If you listen to them on the trail here or in a debate, it’s a very anxious bunch indeed. Elizabeth Warren reaches octaves in her uptalking that the Vienna Boys’ Choir would envy. Pete Buttigieg sounds like a new doctor trying to deliver his first terminal diagnosis. Poor Joe Biden looks like he’s about to get brained by a pole axe every time he’s being asked a question. Amy Klobuchar seems almost beside herself with exasperation.

We know we’ve recently discussed how a healthy dose of fear is necessary for Democratic voters in making their choices, but we didn’t mean the candidates should behave like they were about to be dipped in boiling oil.

There’s just one of them who seems to be having any fun at all: Bernie Sanders.

Sanders has the same pitch as he has had since the 1960s, and while it starts with a very bleak story about the state of America and the world today, it has a happy ending about which Sanders is absolutely certain. Sanders is the same cheerfully crabby guy with the same far-out ideas he had in 1972 when he was running for Vermont governor on the People’s Party ticket – and selling “radical film strips” about Eugene Debs to the local schools on the side.

We’ve talked before about how Baby Boomers are in many ways reliving the political moment in which they came of age 50 years ago.

Certainly the parallels between the Democratic Party’s ongoing crackup and the Republican Party’s pursuit of culturally anxious, downscale white voters looks a lot like the era of Richard Nixon and George McGovern.

The influx of African American voters in the mid-1960s radically altered the Democratic coalition. It drove out the Southern whites who had been the party’s bedrock since Reconstruction. Those voters grabbed ahold of the Republican Party, yanking out its New England roots. It was a profound realignment, not unlike the one we are witnessing now.

But we probably need to go back further to get at what’s going on here.

Both parties are gripped with a kind of wild-eyed populism that is almost religious in its tone and zeal. Mainstream politics and institutions are unequal to the task of harnessing and tempering the impulses. And things are getting weird.

President Trump’s rallies resemble nothing quite so much as big as Pentecostal revival meetings. He’s got the fire and the brimstone, the Manichaean struggle between good and evil and only one path to salvation from certain doom — him, of course. The chants (e.g. “CNN sucks”) and the incantations ( e.g. “The Snake” or his recitation of his victory four years ago) produce a nearly ecstatic condition in crowds sometimes as large as tens of thousands, but sometimes in spaces as intimate as the East Room of the White House.

While Sanders is more Larry David than Oral Roberts at his rallies, he is just as much of a revival preacher as Trump, offering simple solutions to complex problems and absolute moral clarity. It’s greedy rich people who have made America the disaster Sanders says it has been for roughly (checks notes) its entire history.

In both cases, clear, cartoonish villains are necessary. Big companies want to deny people health care because they want people to get sick and die.

Democrats choose terrorists over America because they hate real Americans. In both cases, they find extreme examples to prove their cases — a kooky congresswoman or a sleazy pharmaceutical CEO — and say that they are the rules, not the exceptions.

A century ago, our politics sounded pretty similar and were at least as much imbued with quasi-religious zealotry. The progressive populist movement was born partly of a backlash against the massive disruptions to the way Americans lived and worked because of technology (sound familiar?), and quickly overloaded the circuits of the turn-of-the-century political system.

The fever overtook the Republican Party by way of Wisconsin and points west where radicals like Robert La Follette railed at the pro-business bent of the GOP. But it was Teddy Roosevelt, himself badly stricken with the fever after his time in office, who was arch populist of his party.

Roosevelt had championed some progressive ideas after ascending to the presidency after the assassination of William McKinley, and especially after his election in his own right in 1904, but was mostly held in check by conservatives in Congress. He didn’t seek a second full term in 1908, expecting his hand-picked successor, William Taft to continue the struggle to roll back constitutional limits on government power.

But Taft was no radical and, as he would again later as a Supreme Court justice, instead championed limited government and individual liberty. This drove Roosevelt off a cliff, so he decided to oppose Taft for the Republican nomination in 1912. When he failed, Roosevelt and his outraged supporters formed the Progressive Party and ran in the general anyway.

Roosevelt was like his fellow New Yorker child of privilege Trump in lots of ways. His larger-than-life exploits before the presidency, outsized personality and his searing attacks on the political establishment helped him create and maintain a base of rabid supporters that allowed him to operate outside of traditional restraints.

For all his bullying bluster, Roosevelt could not retake the White House. The predictable result of his rebellion – the election of radical progressive Woodrow Wilson – was a huge setback for Republicans. But the defeat helped the party purge itself of the ill humors of the Bull Moosers and set the stage for the most conservative president of the 20th century, Calvin Coolidge.

Democrats would not be so lucky in their encounter with progressive populism.

Sanders most obvious antecedent was William Jennings Bryan, the former Nebraska congressman who electrified Democrats at their 1896 convention with his plea for a federal bailout of indebted farmers – the “Cross of Gold” speech – that the party spontaneously gave the 36-year-old their nomination.

Democrats’ only national successes since the Civil War had come through a fusion between moderate northeasterners and reconstructed Confederates. The promise that Bryan could bring the populists of the prairie into the coalition was understandably tantalizing to the party.

But that’s not what happened.

Sanders’ secular religious zeal was nothing compared to Bryan’s brand of Christian radicalism pushed the moderates into the waiting arms of McKinley and Roosevelt. And in the husk of a party that remained, there was no center of power to rival Bryan and his faction. He had entered as “the boy orator of the Platte” but had come to dominate utterly his party.

Democrats would go on to nominate him twice more to increasingly disastrous results. So dominated by the populist radicals were the Democrats that they even put Bryan’s brother, Charles, on the ticket as running mate in 1924.

The danger Democrats are facing now with Sanders has been equated to the ongoing failure of Britain’s Labour Party under radical Jeremy Corbyn. And there’s certainly some truth to it, but Bryan offers a much clearer cautionary tale for Democrats.

As they weigh their choices for their 2020 nominee, Democrats ought to look back to the lost decades of their past – a harm so real that no Democrat other than Wilson and his fluke win during Roosevelt’s fit of pique would take the White House for 40 years.