The Democratic advantage over Donald Trump has narrowed in potential head-to-head matchups, according to a Fox News Poll of Wisconsin voters.

In addition, a plurality opposes the Senate removing President Trump from office following impeachment by the House, even as a majority disapproves of the job he is doing as president.

By a 7-point margin, more Wisconsin voters disapprove than approve of Trump’s job performance (46 percent approve vs. 53 percent disapprove).  That’s an improvement since early October, when he was underwater by 10 points (44-54 percent).

On impeachment, Wisconsinites oppose the Senate removing Trump from office by a 4-point margin (44 percent yes vs. 48 percent no).   More Republicans (89 percent) oppose removal than Democrats support it (83 percent), while independents oppose removal by 8 points (38-46 percent). 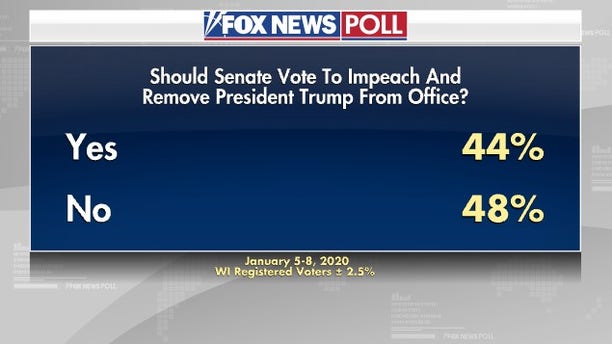 That could be hurting Democrats.  In a general election ballot test, Joe Biden’s 9-point lead over Trump three months ago is down to 5 points.  In addition, Elizabeth Warren was up by 4 points in early October and now is up by 2 points, and Bernie Sanders’ 5-point advantage is now 4 points.  Pete Buttigieg is up over Trump by one point. 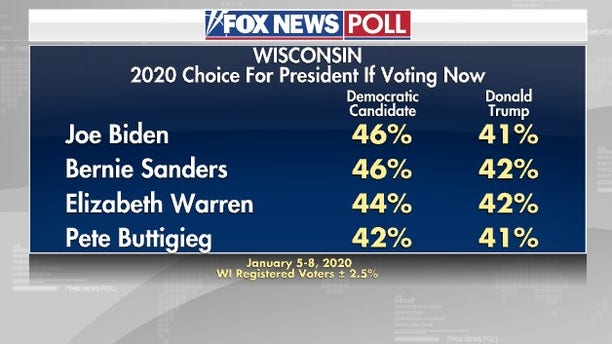 Nothing is clear cut: each of the matchups is within the poll’s margin of error, all the candidates are below 50 percent support, and 12-17 percent are undecided or backing another candidate.

For the Biden-Trump matchup, the tightening comes mainly from a shift among independents, voters with a college degree, and men.

Biden’s 14-point October lead over Trump among independents fell to 3 points and among college graduates it went from 23 to 16 points.  Among men, Trump’s 4-point advantage over Biden in early October is now 13 points.

Meanwhile, Trump gained a bit of ground among white evangelicals, going from a 26-point margin over Biden in October to 39 points today.

“Despite the fact that Republicans and Democrats remain locked in, the president has closed the gap in Wisconsin,” says Republican pollster Daron Shaw. “The explanation is straightforward: his position among key swing groups is better than it was in October.”  Shaw conducts the Fox News Poll with Democratic counterpart Chris Anderson.

When deciding their vote for president in November, roughly equal numbers of Wisconsin voters say the most important issue will be health care (19 percent) as say the economy (18 percent).  Next, it’s climate change and immigration/border security (9 percent each), political corruption (8 percent), and partisanship (6 percent).

Overall, Wisconsin voters think tariffs hurt rather than help the national economy by an 11-point margin.  Three months ago, more said tariffs hurt by 19 points (September 29-October 2, 2019).  Does that mean Trump’s tariff policies could hurt him in the Badger State?  Maybe, however only one percent say international trade will be the deciding issue in their vote.

Trump was the first Republican presidential candidate to win Wisconsin since 1984, edging out Hillary Clinton by less than one percentage point in 2016.  The poll finds 89 percent of Clinton voters support Biden, while 89 percent of Trump voters are with him again this year.

There’s been a reordering in the race for the Democratic nomination, and while Biden is still the top choice among Wisconsin Democratic primary voters -- it’s by a razor-thin margin.

Biden receives 23 percent, down from 28 percent in early October.  He’s followed by Sanders at 21 percent, up from 17 percent.  Warren drops to third with 13 percent, down 9 points compared to three months ago (22 percent).

The poll shows Pete Buttigieg (9 percent) and newcomer Michael Bloomberg (7 percent) are the only others to receive more than 4 percent support. 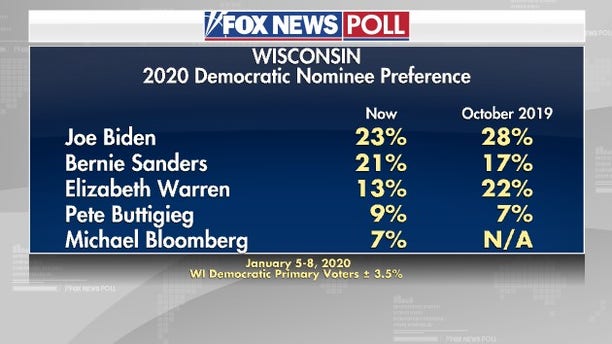 Among Democratic primary voters, Biden and Sanders receive roughly equal support from men, women, and voters without a college degree.   The biggest divider appears to be age:  voters under 45 strongly prefer Sanders (36 percent) over Warren (15 percent) and Biden (11 percent).  Those ages 45+ go for Biden (29 percent) over Sanders and Warren (13 percent apiece).

By a 49-43 percent margin, Wisconsin Democratic primary voters want a nominee who will restore the political system to the way it was before the Trump administration rather than one who will fundamentally change the system.

Biden is the clear choice among Democrats wanting to go back to the pre-Trump era, while Sanders is the preferred candidate among those wanting big change.

Conducted January 5-8, 2020 under the joint direction of Beacon Research (D) and Shaw & Company (R), this Fox News Poll includes interviews with 1,504 Wisconsin voters who spoke with live interviewers on both landlines and cellphones.  Respondents were randomly selected from a statewide voter file, and 671 were screened to identify potential participants in the Democratic presidential primary.  The poll has a margin of sampling error of plus or minus 2.5 percentage points for all registered voters and 3.5 points for Democratic primary voters.