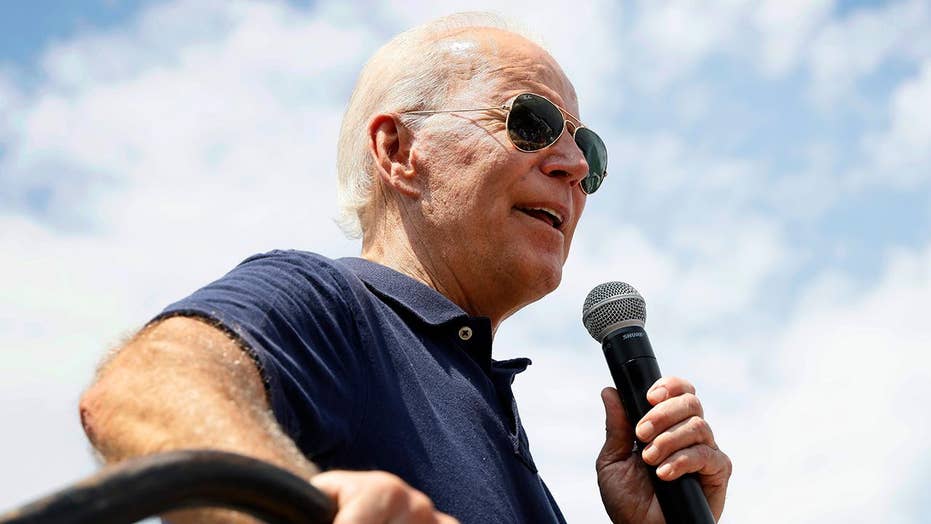 In the first major shakeup to the lineup, Elizabeth Warren moves ahead of Bernie Sanders to claim second place behind Joe Biden in the Democratic nomination race.  In addition, primary voters sharply divide between embracing former President Obama’s legacy and taking a new path.

A new Fox News Poll finds Biden continues to lead the nomination race with the support of 31 percent of Democratic primary voters.  Next is Elizabeth Warren at 20 percent, Bernie Sanders at 10 percent, and Kamala Harris at 8 percent.

Warren’s move up came in steady steps.  From March to May she gained 5 points, then 3 more in July, and 8 more in August -- for a total 16 percentage-point increase.

During that same time, Sanders dropped 13 points (from 23 percent in March to 10 percent now).

Biden and Harris are both exactly where they were in March.

John Hickenlooper, who dropped out of the race Thursday, received less than one percent.

Warren’s gains come at Sanders’ expense, as she’s now the favorite among primary voters under age 45 as well as those who identify as “very” liberal.  Since last month, Warren is up 12 points among the under 45 crowd, while Sanders lost 10.  And her support increased 18 points among very liberal voters, as backing for Sanders dropped 16.

By a wide 60-36 percent margin, Democratic primary voters prefer a nominee who will “restore the country and get American politics back to normalcy” over one who will “fundamentally change” how Washington works.

They divide sharply, however, when deciding between a candidate who will build on Obama’s legacy (48 percent) and one who will take a new and different approach (47 percent).

Those favoring a new approach go for Warren over Biden by 5 points, while those wanting to build on Obama’s legacy back Biden by 26.

Each of the Democratic candidates tested in the poll beats President Trump in possible 2020 matchups -- and each makes gains compared to July.  And while Trump never hits 40 percent support, it’s important to note that none of the challengers breaks 50 percent, and there are enough remaining undecided/third-party voters -- between 12-15 percent -- to swing the race either way.

“Biden and Sanders have held sizable leads over Trump before,” said Democratic pollster Chris Anderson, who conducts the Fox News Poll with Republican Daron Shaw. “But this is the first time our poll results give Warren and Harris the chance to stake a claim to an electability argument as well.”

Harris’s 6-point advantage in a matchup against Trump sits right at the error margin (45-39).

“So much can happen in a day, let alone 14 months,” said Shaw. “But the president’s inability to capitalize on the strong economy, especially among independents, has to concern the White House.”

While interest in the 2020 election remains high among all voters, more Democrats (63 percent) than Republicans (56 percent) are “extremely” interested.

When Democratic primary voters are asked whether they have a favorable or unfavorable view of Obama, 93 percent say favorable compared to 6 percent unfavorable.  That gives him a net favorability rating of +87 points.

Voters who have a negative view of both Biden and Trump back Biden by a 43-10 percent margin in the head-to-head matchup, although many would vote for someone else (27 percent), wouldn’t vote (12 percent) or are undecided (8 percent).

The Democratic Party has a +6 net positive rating (51 favorable-45 unfavorable), while the Republican Party is viewed negatively by 13 points (41-54).  Part of the reason is more Democrats (92 percent) rate their party favorably than Republicans rate theirs (84 percent).

Conducted August 11-13, 2019 under the joint direction of Beacon Research (D) and Shaw & Company (R), this Fox News Poll includes interviews with 1,013 randomly chosen registered voters nationwide who spoke with live interviewers on both landlines and cellphones.  The poll has a margin of sampling error of plus or minus three percentage points for all registered voters, and 4.5 points for Democratic primary voters (483).