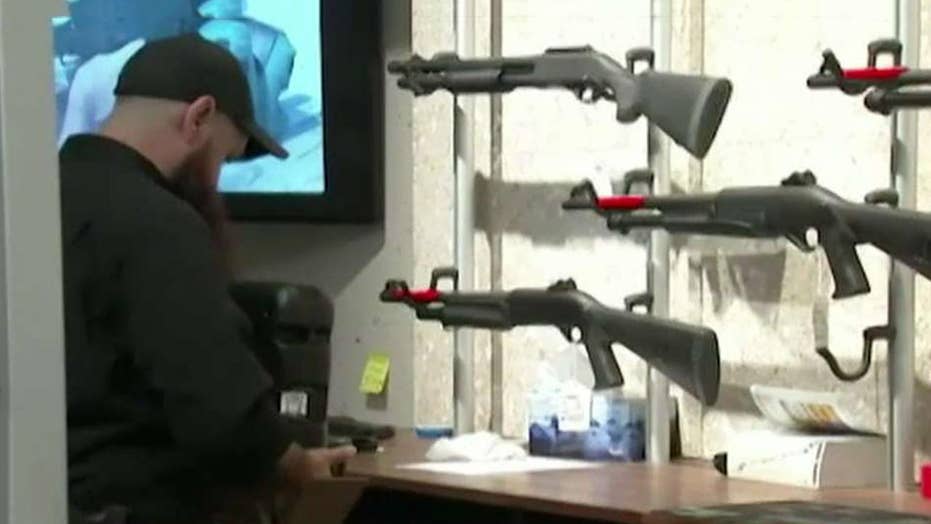 While Democrats propose taking away what some call 'weapons of war', Republicans are touting their second amendment rights to bear arms; Elina Shirazi reports.

"I’m a big fan of what Lake County did, and I’m proposing the same resolution in Clay County. With Beto [O'Rourke] saying he’s going to take people's guns away, I think it’s important that, as community leaders, we stand with our citizens and reaffirm that the Second Amendment is not negotiable," Gavin Rollins, a Clay County Commissioner said. "This is going set off a ripple effect."

The proposals come as Florida has become a key battleground on gun control following three mass shootings the past four years. Following the latest shooting, at Stoneman Douglas High School in Parkland in February 2018, which killed 17 people, a wave of gun control activists in the state rushed to Washington and Tallahassee to demand tougher gun-control laws. The June 2016 Pulse nightclub shooting in Orlando killed 49 people and the Fort Lauderdale airport shooting in January 2017 killed five people.

The shootings prompted activists to push for stronger gun laws. But now, smaller jurisdictions in the state seem to be fighting back, demanding that lawmakers let them keep their firearms. Sarasota County is getting ready to vote on the issue on Tuesday afternoon.

"I am excited to bring up the Second Amendment Sanctuary County Resolution because you usually only hear from Second Amendment supporters reactively on defense, rather than pro-actively on offense," said Sarasota County Commissioner Christian Ziegler. "With our Second Amendment rights, guaranteed to us by our Constitution, under attack at all levels of government, I believe it is important for the Sarasota County Commission to make it clear -- to the citizens we represent -- where their local government stands on this issue."

Lake County Commissioner Josh Blake, the brainchild behind the resolution, called it a response to gun buybacks and assault weapon ban proposals by Democratic presidential candidates, including O’Rourke, who is no longer running. O'Rourke said at a September presidential debate, “Yes, we are going to take your AR-15, your AK-47!”

“The Second Amendment is the one that protects everything else. This is a right that we have that distinguishes us from almost every country on the globe. That our government trusts us to defend ourselves. We can defend our families and our homes with the weapon of our choice,” Blake said.

"When I heard a wide swath of the Democratic presidential candidates in debates calling for national gun confiscation, weaponized local law enforcement to go door to door and take weapons, legally owned weapons from their friends and neighbors, I thought we can't let that happen," he said. "That's not fair to the men and women who work in local law enforcement. It's certainly not fair to law-abiding citizens who would be affected by this, and I think Lake County needed to hear us stand up and say, we've got your back.”

Those trying to prevent gun violence say lax gun laws won’t cut it in a state that has seen some of America’s deadliest mass shootings.

“We need to be preventing these shootings, not making it easier for dangerous people to use firearms … they are concerned about the gun-grabbing, is what they are calling [it], what they should be concerned about is our rampant gun violence which is happening almost daily in this country," said Patricia Brigham, the co-founder of the Florida Coalition to Prevent Gun Violence.

A Wakulla County commissioners in Florida said he also plans to take up a resolution making the county a Second Amendment sanctuary.

"Protecting ourselves and our families is the most basic and most important right that we possess," said Ralph Thomas, a Wakulla county commissioner. "Our Founding Fathers drafted the Second Amendment so clearly and succinctly that no interpretation is required. Yet, attempts to distort it, or eliminate it, persist."

Blake said that counties have to stand up for gun rights, and he's glad others in the state plan to follow suit.

“I think that the more people stand up," Blake said, "the more constituent government bodies that stand up and say to the federal government, ‘Don’t do this, don’t go there, this is America, this isn’t happening here,’ I think that will have an impact."