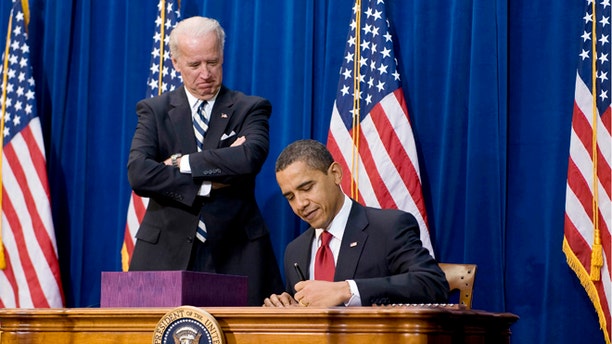 The five-year anniversary Monday of President Obama’s stimulus package has prompted Democrats and Republicans to spar again over the economy and whether the roughly $800 billion in spending created the number of jobs promised.

The White House hailed the measure, known as the American Recovery and Reinvestment Act, in a 70-page report released Monday stating it and other fiscal measures saved or created 1.6 million jobs through 2012 and eventually ended the country’s 18-month-long recession in June 2009.

“The recovery act … helped to avert a second Great Depression and made targeted investments that will pay dividends long after the act has fully phased out,” said Jason Furman, chairman of the White House Council of Economic Advisers, which produced the report. “The U.S. economy is undoubtedly in a stronger position than when President Obama took office.”

However, Republicans were quick to criticize the spending -- arguing that it was rammed through Congress by Democrats and created far fewer than the 3.3 million jobs touted.

“The ‘stimulus’ has turned out to be a classic case of big promises and big spending with little results,” said House Speaker John Boehner, R-Ohio. “Millions of families are still asking ‘where are the jobs?’ ”

Obama signed the bill about 14 months after the deep recession started in December 2007 and about eight months before the national unemployment rate peaked at 10 percent in October 2009.

The rate is now 6.6 percent. But Republicans argue the lower number really shows many Americans have quit looking for work.

“Five years … later, millions of Americans are still waiting for the relief Democrats and the president promised,” said South Dakota Republican Sen. John Thune, chairman of the Senate Republican Conference. “The percentage of Americans participating in the labor force is at the lowest level since Jimmy Carter occupied the White House.”

Obama was scheduled to talk Tuesday at a public event in suburban Maryland about the economy, but it was unclear if he would discuss the stimulus package.

“What makes this recovery plan so important is not just that it will create or save three and a half million jobs over the next two years, including nearly 60,000 in Colorado,” Obama said when he signed the bill in Denver. “It’s that we are putting Americans to work doing the work that America needs done in critical areas that have been neglected for too long -- work that will bring real and lasting change for generations to come.”

The most recent report by the non-partisan Congressional Budget Office, released in 2012,said the stimulus package essentially got a maximum 1.5 million more Americans working and added a maximum 1.9 million full-time-equivalent jobs.

“If the goal was to make things better, a clear majority of Americans would say it didn’t,” Senate Minority Leader Mitch McConnell, R-KY., said Monday.

By mid-morning, the cross talk between Democrats and Republicans had turned into at least one direct response.

“GOP attacks on the Recovery Act are a perfect example of the delusional messaging that makes them appear out of touch to so many Americans,” White House senior adviser Dan Pfeiffer said on Twitter.