Melania Trump cheered and jeered by Baltimore students during speech

Melania Trump received a "mixed reception" Tuesday at a Baltimore youth event meant to raise awareness of opioid abuse, according to the Baltimore Sun.

Trump was both cheered and booed by the crowd of middle school and high school students after she was introduced by Jim Wahlberg, the brother of actor Mark Wahlberg, at the B’More Youth Summit on Opioid Awareness. The Mark Wahlberg Youth Foundation partially sponsored the event.

Wahlberg tried to settle the crowd by asking: "If you have lost somebody you love or somebody who you cared about to an overdose, please stand up."

However, the Associated Press reported the audience remained noisy throughout the first lady's five-minute address. At one point, Mrs. Trump interrupted her remarks to say, “Hello, everyone,” before continuing. 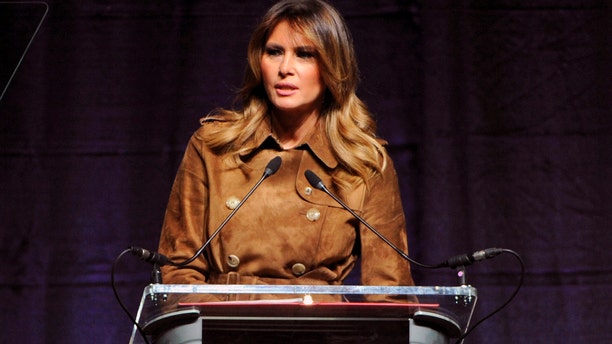 “Your future will be determined by the choices you make," the first lady told the crowd. "Using drugs will only slow you down.”

“I hope that the knowledge you gain here will help you tackle the tough decisions you may face so that you can lead healthy and drug-free lives," Trump added.

In a statement released later Tuesday, the first lady said: "We live in a democracy and everyone is entitled to their opinion, but the fact is we have a serious crisis in our country and I remain committed to educating children on the dangers and deadly consequences of drug abuse."

The cool reception follows a clash earlier this year between late Maryland U.S.Rep. Elijah Cummings and President Trump, who criticized the Democrat's district as a "rodent-infested mess" where "no human being would want to live." Cummings replied that government officials must stop making "hateful, incendiary comments" that distract the nation from its real problems.

The president gave a speech in Baltimore in September and was met by protesters.