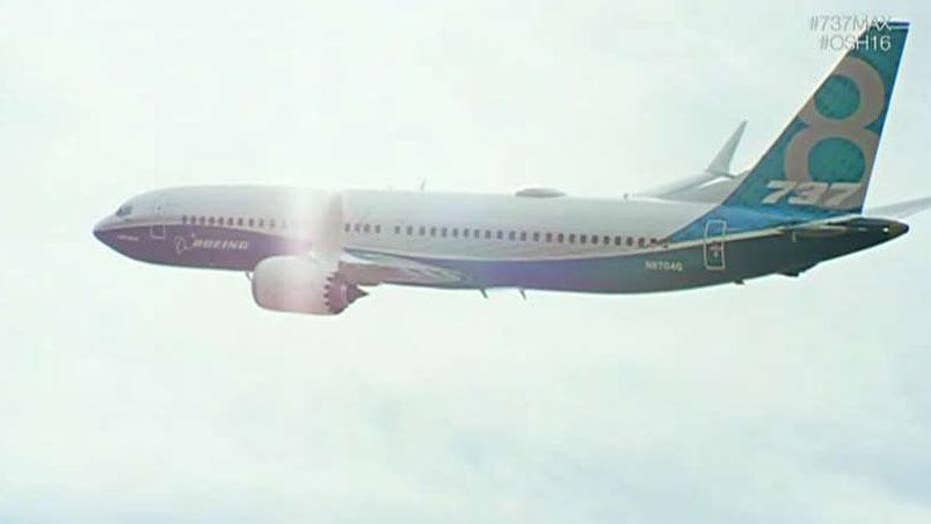 Two top Democratic U.S. senators called on Boeing to ground all 737 Max 8 planes operating in the United States while the deadly weekend crash of an Ethiopian Airlines jet is investigated, while the head of the House Transportation Committee said Monday that he would "think twice" about boarding the aircraft in the future.

All 157 people on board were killed after Ethiopian Airlines Flight 302 went down in clear weather shortly after takeoff Sunday morning outside Addis Ababa. The crash was similar to that of a Lion Air jet of the same model that plummeted into the Java Sea off Indonesia on Oct. 29 of last year, killing all 189 people on board.

Rep. Peter DeFazio, D-Ore., told Fox News on Monday that the two tragedies were "eerily similar ... in terms of the unusual climb and the dive."

"I would think twice about getting on the plane, truthfully," he added. "I'm not going to be dishonest here."

Following the crash, all airlines in Ethiopia, China and Indonesia grounded their Max 8s, as did Caribbean carrier Cayman Airways, Comair in South Africa and Royal Air Maroc in Morocco. Sens. Dianne Feinstein, D-Calif., and Richard Blumenthal, D-Conn., called on Boeing to follow suit in the U.S.

"Until the cause of the [Ethiopian Airlines] crash is known and it’s clear that similar risks aren’t present in the domestic fleet, I believe all Boeing 737 Max 8 series aircraft operating in the United States should be temporarily grounded," Feinstein said in a letter to acting Federal Aviation Administration chief Dan Elwell. "This aircraft model represents only a small fraction of the domestic fleet, and several other countries have already taken this important step."

Blumenthal said in a statement that the two "catastrophic accidents" involving the Max 8 "call into serious question the safety of these airplanes. The FAA and the airline industry must act quickly and decisively to protect American travelers, pilots and flight attendants. These planes must be grounded immediately and airlines should work expeditiously to minimize disruption and accommodate customers whose travel is impacted."

In an email to employees made public earlier Monday, Boeing CEO Dennis Muilenburg wrote: "We are confident in the safety of the 737 MAX and in the work of the men and women who design and build it."

The FAA tried to discourage comparisons between Sunday's crash and the Lion Air disaster. While noting that "[e]xternal reports are drawing similarities between [the accidents]," the agency said, "this investigation has just begun and to date we have not been provided data to draw any conclusions or take any actions."

In an earlier statement, the FAA said it would take "immediate and appropriate action" if it identified an ongoing safety issue.

DeFazio told Fox News that "heads will roll" at the FAA "if they're not confident in their data and the safety of this plane."

"They're not supposed to be promoting [aviation]," DeFazio said. "They tell me they are confident in their data and their simulations. That's the best I can do right now."