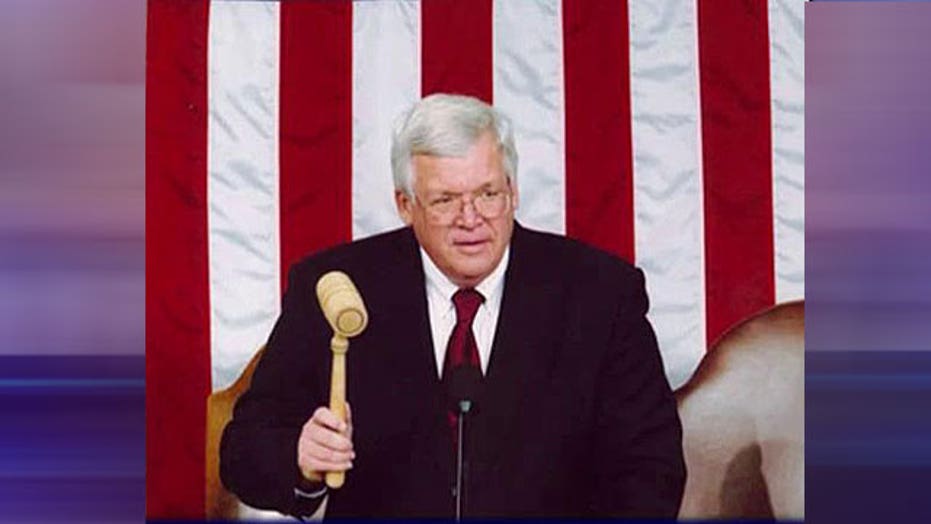 Federal prosecutors indicted former U.S. House Speaker Dennis Hastert Thursday on charges he allegedly hid payments he made to an apparent blackmailer in order to compensate for and conceal “prior misconduct.”

The 73-year-old Illinois Republican is accused of structuring the withdrawal of $925,000 in cash in order to evade the requirement that banks report cash transactions over $10,000. He is also accused of lying to the FBI about the withdrawals.

Hastert was indicted on two counts, both carrying a maximum penalty of five years in prison and a $250,000 fine.

Hastert, who served as speaker of the House for eight years until his retirement in 2007, is alleged to have met with a person only identified as “Individual A” in 2010. The indictment alleges that during one of those meetings, they discussed alleged prior misconduct that had been committed years earlier.

The indictment says that Hastert then agreed to provide $3.5 million “in order to compensate for and conceal his prior misconduct against Individual A.” It does not elaborate on the alleged misconduct or indicate if Individual A is a man or a woman. However, it says the person has known Hastert most of the person's life. It also says the person has been a resident of Yorkville, Illinois, where Hastert was a high school teacher and wrestling coach from 1965 to 1981.

From 2010 to 2014, Hastert withdrew a total of approximately $1.7 million in cash from various bank accounts and provided it to Individual A, according to the indictment.

Around April 2012, bank officials began questioning Hastert about the large withdrawals, and starting in July of that year, Hastert reduced the amounts he withdrew at a time to less than $10,000 --apparently so the withdrawals would be less conspicuous, according to the indictment.

Investigators questioned Hastert on Dec. 8, 2014 and he lied about why he had been withdrawing so much money at a time. He told investigators he did it because he didn't trust the banking system, the indictment alleges.

"Yeah ... I kept the cash. That's what I am doing," it quotes Hastert as saying.

A spokesman for the lobbying and law firm where Hastert worked in Washington, D.C., said Hastert has resigned his post.

The website for Dickstein Shapiro LLC has removed Hastert's biography as a "featured attorney."

Hastert was a little-known lawmaker from suburban Chicago when chosen to succeed Newt Gingrich as House speaker. Hastert was picked after favored Louisiana Congressman Bob Livingston resigned after admitting to several sexual affairs. He was generally viewed as a congenial lawmaker, and was given the nickname "coach" by his Republican colleagues.

Hastert isn't the only recent House speaker to face ethics troubles. Former House Speaker Jim Wright, D-Texas, resigned under a cloud of conflict in 1989 after a very short speakership. Wright, who died May 6, was investigated by the House Ethics Committee over speaking fees and purchases of his book, becoming the first speaker to resign due to a scandal.

Hastert's predecessor, Newt Gingrich, was also also probed by the House Ethics Committee in the mid 1990's for wrongdoing. He was reprimanded and ordered to pay $300,000 but was never charged. Gingrich stepped down in 1998 but not because of the ethics probe.