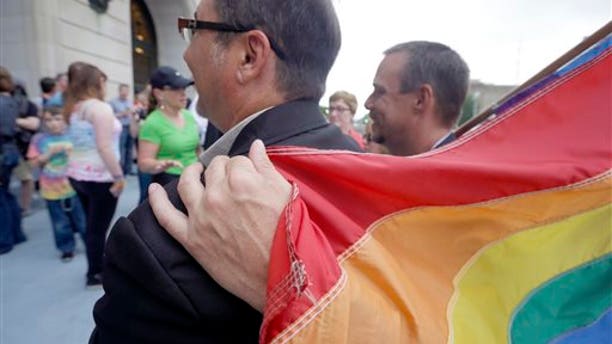 May 12, 2014: Shon DeArmon, right, puts his arm around his partner James Porter while holding a flag outside the Pulaski County Courthouse in Little Rock, Ark. (AP)

A federal judge struck down Arkansas' voter-approved gay marriage ban Tuesday but stopped any rush to the altar by putting her order on hold so the state can consider an appeal.

U.S. District Judge Kristine Baker ruled in favor of two same-sex couples who had challenged a 2004 constitutional amendment and earlier state law defining marriage as between a man and a woman. The couples argued the ban violated the U.S. Constitution and discriminated based on sexual orientation.

"The fact that Amendment 83 was adopted by referendum does not immunize it from federal constitutional scrutiny," Baker wrote in her ruling.

The state's marriage laws and the amendment violate the U.S. Constitution by "precluding same-sex couples from exercising their fundamental right to marry in Arkansas, by not recognizing valid same-sex marriages from other states, and by discriminating on the basis of gender," she wrote.

Baker put the ruling on hold, anticipating an appeal to the 8th U.S. Circuit Court of Appeals, based in St. Louis.

A spokesman for Democratic Attorney General Dustin McDaniel said McDaniel was reviewing the ruling and would decide after the Thanksgiving holiday whether to appeal in consultation with Republican Attorney General-elect Leslie Rutledge.

"We appreciate Judge Baker's implementation of a stay in this matter in order to avoid confusion and uncertainty as this case goes through the appeals process," spokesman Aaron Sadler said in an email.

Jack Wagoner, a lawyer for the couples who had told the judge last week that same-sex marriage would eventually be legal nationwide, said he was pleased with her decision.

"She's on the right side of history," Wagoner said. "It's pretty clear where history's heading on this issue."

Another lawyer, Cheryl Maples, said eyes would turn now to the state Supreme Court, which heard arguments last week in a similar but separate case.

"If the state Supreme Court strikes down on state constitutional issues, then it's gone as far as it can go," Maples said.

Justices are weighing whether to uphold Pulaski County Circuit Judge Chris Piazza's decision in May striking down the 2004 amendment and earlier state law as unconstitutional. Piazza's decision led to 541 same sex couples getting married in the week before the state Supreme Court suspended his ruling.

Justices have not indicated when they will rule in that case. The lawsuit before the state Supreme Court also argues the ban violates Arkansas' constitution.

The head of the group that campaigned for the ban said he was pleased that Baker suspended her ruling and said he hoped the state would move quickly to appeal.

"It's our hope that eventually the will of the people of Arkansas will be upheld rather than the wishes of judges," Jerry Cox, president of the Arkansas Family Council, said.

Lawyers in McDaniel's office had argued in federal court that same-sex marriage was not a fundamental right guaranteed by the constitution. McDaniel has said he personally supports allowing gay couples to marry but will stay in court defending the ban, which voters approved by a 3-1 margin. Rutledge, his successor, has said she opposes gay marriage and has vowed to defend the ban.

Judges across the country have ruled against bans similar to Arkansas' since the U.S. Supreme Court struck part of a federal anti-gay marriage law in June 2013, and gay marriage is legal in more than half of the U.S.

"I am proud to be an Arkansan by birth, but I'll be even prouder when this shameful stain on the state Constitution is erased once and for all," Griffin said in a statement.