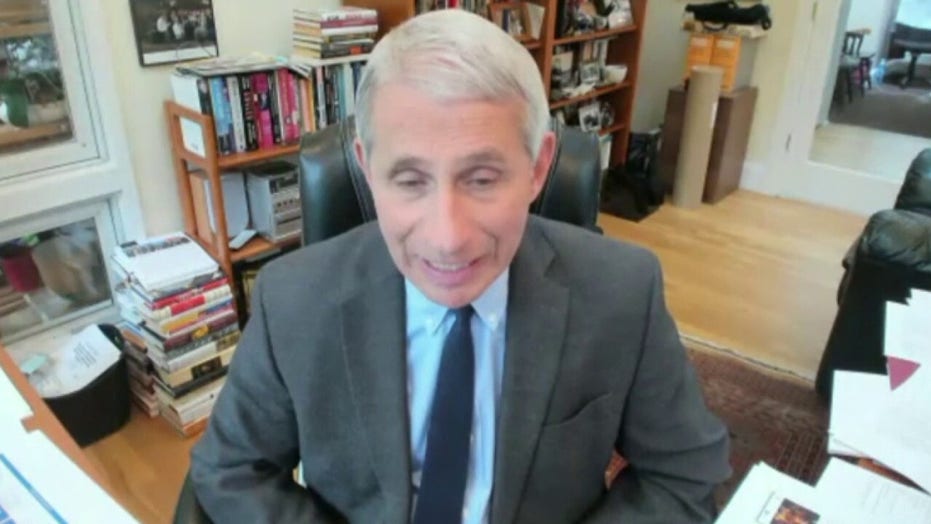 Dr. Fauci on reopening too quickly: 'The consequences could be really serious'

Dr. Anthony Fauci, the face of the White House coronavirus task force, warned in testimony Tuesday before the Senate Health Committee that reopening the economy before certain "checkpoints" set up in the Trump administration's coronavirus recovery plan are met could bring "serious" consequences.

"As I have said many times publicly, what we have worked out is a guideline framework for how to open America again,” Fauci said, referencing a set of guidelines the White House has released for states and localities to begin opening their economies. In order to proceed to the first of three stages, states would need to see an uninterrupted decrease in coronavirus cases over a 14-day period.

"Depending on the dynamics of an outbreak in a particular region, state, city or area, that would really determine the speed and the pace with which one does reenter or reopen," Fauci said. "If some areas – cities states or what have you – jump over those barriers, checkpoints and prematurely open up without having the capability of being able to respond effectively, and efficiently, my concern is that we will start to see little spikes that might turn into outbreaks."

GOP SEN. ALEXANDER: 'STAYING AT HOME INDEFINITELY IS NOT THE SOLUTION'

Fauci warned that prematurely lifting coronavirus restrictions closing schools and businesses and limiting travel would lead to "suffering and death" and "turn the clock back instead of going forward."

When asked by Sen. Patty Murray, D-Wash., what could happen if areas do ignore the "checkpoints," Fauci said, "The consequences could be really serious."

Further, when asked by Sen. Elizabeth Warren, D-Mass., if the virus was under control, Fauci said it is not.

"Right now it depends on what you mean by containment," Fauci said, noting the virus is not completely under control. "So when you look at the dynamics of new cases, even though some are coming down, the curve looks flat with some coming down. So I think we're going in the right direction, but the right direction does not mean we have by any means total control of this outbreak."

He added that without proper measures, the U.S. could face a "resurgence" in cases. He said the U.S. should be in a much better place by the fall, but said if adequate measures are not taken, "there will be problems."

"The time for magical thinking is over here," Warren said of President Trump's pushes to reopen the economy quickly and optimism that the virus "will go away."

The hearing, which features Fauci, the director of the National Institute of Allergy and Infectious Diseases (NIAID), as well as three other top administration health officials, is the biggest congressional hearing since the coronavirus crisis began. It comes as states across the country are plotting their own courses for reopening their economies, with some already opening sectors and others maintaining strict lockdowns. President Trump himself has stressed the importance of getting America back to work, leading to criticism from some Democrats that this approach could be too risky.

Fauci did not rip on the Trump administration's response to the pandemic in his planned remarks, instead emphasizing efforts by the National Institutes of Health (NIH) to develop vaccines and other medical means to fight the coronavirus.

"Hopefully our research efforts, together with the other public health efforts, will get us quickly to an end to this terrible ordeal that we are all going through," Fauci said.

"NIH is focused on developing safe and effective COVID-19 vaccines and therapeutics, and sensitive, specific, and rapid point-of-care diagnostic tests," Fauci also said in written remarks submitted to the committee. "These efforts will improve our response to the current pandemic and bolster our preparedness for the next, inevitable emerging disease outbreak"

FILE - In this April 22, 2020, file photo, Dr. Anthony Fauci, director of the National Institute of Allergy and Infectious Diseases, speaks about the new coronavirus in the James Brady Press Briefing Room of the White House, in Washington. A Senate hearing on reopening workplaces and schools safely is turning into a teaching moment on the fickle nature of the coronavirus outbreak. Senior health officials, including Fauci, scheduled to testify in person before the Health, Education, Labor and Pensions committee on Tuesday, May 12 will instead appear via video link. (AP Photo/Alex Brandon, File)

FAUCI, OTHER HEALTH OFFICIALS TO TESTIFY BEFORE SENATE PANEL VIA VIDEOCONFERENCE AMID CORONAVIRUS CONCERNS

On one point, Fauci said the government is focusing on several different vaccine candidates, using the hockey term "multiple shots on goal" to describe the increased chances that one would work. Additionally, he said if more than one is successful that would help increase the availability of the vaccines globally.

But, Fauci noted, "there's no guarantee that a vaccine is going to be effective."

Given the chance to attack Trump in an exchange with Sen. Tim Kaine, D-Va., Fauci declined to. Kaine pushed Fauci on whether South Korea's success on fighting the coronavirus showed that the U.S. response to the pandemic was inadequate. Fauci noted that there is a "big difference" between the U.S. and South Korea.

Fauci appeared remotely due to concerns that he might have been exposed to the coronavirus. Multiple senators also appeared virtually for the hearing, including Sen. Lamar Alexander, R-Tenn., the chairman of the committee, and Murray, the ranking member.

"After consulting with Dr. Fauci, and in an abundance of caution for our witnesses, senators, and the staff, all four Administration witnesses will appear by videoconference due to these unusual circumstances," Alexander said in a statement.

Alexander, in his opening remarks, emphasized the necessity of testing and also said the government might make an effort to mass-manufacture a vaccine before it’s been proven to work so it can be quickly distributed once it’s officially approved.

“Those vaccines, those treatments, are the ultimate solution,” he said. “But until we have them, all roads back to work and school go through testing."

Murray wasted no time hitting the president in her opening remarks.

"Families across the country are counting on us for the truth about the COVID-19 pandemic, especially since it is clear they will not get it from President Trump," she said. "Truth is essential... The president isn't telling the truth. We must. And our witnesses must."

She also criticized the Trump administration's tangible response to the virus, saying it has been marked by delays and insufficient assistance to states and health professionals. Additionally, she advocated for another coronavirus stimulus bill to help ease the burden of the economic shutdowns across the country aimed at slowing the spread of the virus.

Fauci, when questioned by Alexander, said it would not be reasonable to expect a vaccine to be ready for back-to-school season this year. Trump has said he would like to have a vaccine by the end of the year.

"The idea of having treatments or a vaccine ... ready by the fall ... would be something of a bridge too far," he said.

Fauci also added that there is a good chance to see further rebounds in the disease, but that he hopes the U.S. will be better prepared to deal with them.

"I would hope that if we do have the threat of a second wave, we will be able to deal with it very effectively to prevent it from becoming an outbreak. Not only what we've seen now, but much, much less," he said.

Admiral Brett Giroir, the Assistant Secretary for Health, emphasized that the U.S. had conducted "more than 9 million COVID-19 tests, a number far greater than any other country and double the per capita tests performed to date in South Korea," a nation that many have held up as the model for handling the coronavirus' effects.

He noted that by the late summer and early fall, he expected the U.S. to be able to perform between 40 and 50 million coronavirus tests per month.

Fauci got into a dustup with Sen. Rand Paul, R-Ky., over Paul's criticism of some of the prognostications that have come from public health experts and the push to reopen schools quickly.

"I have never made myself out to be the end-all and only voice in this," Fauci said. "I'm a scientist, a physician and a public health official. I give advice, according to the best scientific evidence."

He continued, emphasizing that it is not clear children are generally immune from the harmful effects of the coronavirus: "We should be humble about what we don't know. And I think that falls under the fact that we don't know everything about this virus, and we really got to be very careful, particularly when it comes to children. Because the more and more we learn, we're seeing things about what this virus can do that we didn't see from the studies in China or in Europe."

During questioning, self-proclaimed Democratic socialist Sen. Bernie Sanders, I-Vt., pushed the witnesses on whether or not a vaccine, once developed, would be broadly available to people regardless of their income.

"If, God-willing, a vaccine is developed, and if we're able to produce it as quickly as we all hope we can, I imagine that that vaccine would be distributed to all people free of charge, or at least make sure that everybody in America that needs that vaccine will get it regardless of their income?" Sanders asked Food and Drug Administration Commissioner Stephen Hahn.

Hahn said that issue was not under his purview as the FDA commissioner, but Giroir said he would advocate within the Trump administration to make sure the vaccine is accessible.

"They should gain access to it ... I will certainly advocate that everyone is able to receive the vaccine regardless of income or any other circumstance," Hahn said.

Democrats, ahead of the hearing, made clear they saw it as an opportunity to separate Fauci from President Trump, whom the medical expert is almost always with when he appears publicly, so that Fauci will feel free to criticize Trump. Critics of the president have argued his response to the coronavirus crisis was wholly inadequate, alleging Trump initially downplayed the threat before letting petty politics get in the way of helping states and then moving too quickly to reopen the economy.

"Until now, we've mostly heard from the members of the coronavirus task force through the distorted lens of the White House press conference where the president often prevents them from answering fully, interrupts their response, or even contradicts their fact-based evidence," Senate Minority Leader Chuck Schumer, D-N.Y., said on Monday.

"This will be one of the first opportunities for Dr. Fauci to tell the American people the unvarnished truth without the president lurking over his shoulder. Dr. Fauci, let it rip," he added.

Trump previously blocked Fauci from appearing before a House committee, saying the members of the Democrat-controlled House are "haters."

Fauci, like he had previously, avoided criticizing Trump directly on Tuesday, but did issue stern warnings on what could happen if measures to slow the disease's spread are lifted too soon.

Under questioning from Sen. Kelly Loeffler, R-Ga., all four witnesses said their relationships with the president are not "confrontational" and said they felt free to give their opinions and advice on the coronavirus pandemic.

Fauci was joined by Dr. Robert Redfield, the director of the Centers for Disease Control and Prevention, Hahn and Giroir.