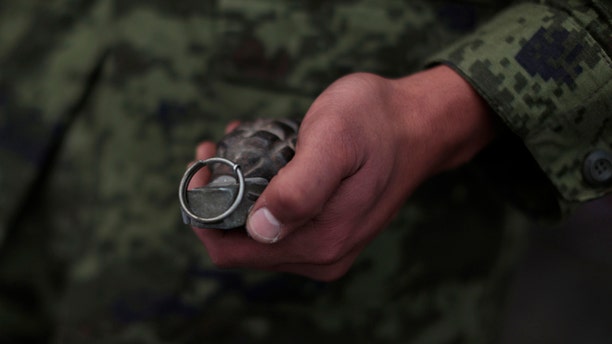 In this file photo, a soldier holds a grenade in Mexico City, Mexico. (Reuters)

Federal agents and prosecutors in Arizona made multiple errors in their investigation of a U.S. citizen who was suspected of smuggling grenade components to Mexico, including failing to arrest him when there was more than enough evidence to do so, the Justice Department watchdog said in a harshly critical report Thursday.

The inspector general's report found parallels between the investigation into Jean Baptiste Kingery by the Bureau of Alcohol, Tobacco, Firearms and Explosives and "Operation Fast and Furious," an ATF gun-running operation along the Southwest border that relied on flawed tactics and became a political firestorm for the Justice Department. Those similarities include poor supervision, weak oversight and a failure "to take or insist on overt enforcement action against the subjects of the investigations."

"Our reviews of both cases concluded that, in failing to act, they did not adequately consider the risk to public safety in the United States and Mexico created by the subjects' illegal activities," the report states.

In a statement, the Justice Department said that in the past six years it had taken "aggressive action" to ensure that the mistakes of the Kingery case "are not repeated."

The department said the officials responsible for the operation have either left the department or have been reassigned. It also noted that the deputy attorney general last year issued guidance to U.S. attorney's offices around the country about "overseeing sensitive operations." The ATF has also developed specialized training to deal with intelligence matters and legal issues.

According to the report, the ATF learned in 2009 that Kingery was ordering grenade components from an online military surplus dealer that agents suspected were being transported into Mexico and converted into live grenades for use by drug cartels.

Agents over the next few months intercepted two deliveries of grenade components that were intended for Kingery. But instead of trying to arrest him for the illegal export, agents marked the components so they could be identified later, delivered the items to his shipping address and set up surveillance to determine whether the parts were being taken into Mexico.

The operation came under public scrutiny in 2011 after Mexican soldiers involved in a shootout with members of a drug cartel found grenade hulls bearing markings similar to the ones the ATF made as part of its investigation.

The inspector general's report also faults the U.S. Attorney's Office in Arizona for failing to prosecute Kingery after he was stopped at the border in June 2010 transporting hundreds of grenade hulls and fuses. A prosecutor said Kingery was not arrested because the ATF wanted him as an informant, though ATF agents said he was never used as an informant and that prosecutors simply refused at the time to bring charges, according to the report.

Kingery returned to Mexico, where he was arrested in August 2011. Mexican authorities are prosecuting him for allegedly violating organized crime laws.

In "Operation Fast and Furious," federal agents permitted illicitly purchased weapons to be transported unimpeded in an effort to track them to high-level arms traffickers.

Federal agents lost control of some 2,000 weapons, and many of them wound up at crime scenes in Mexico and the U.S. Two of the guns were found at the scene of the December 2010 slaying of border agent Brian Terry near the Arizona border city of Nogales.