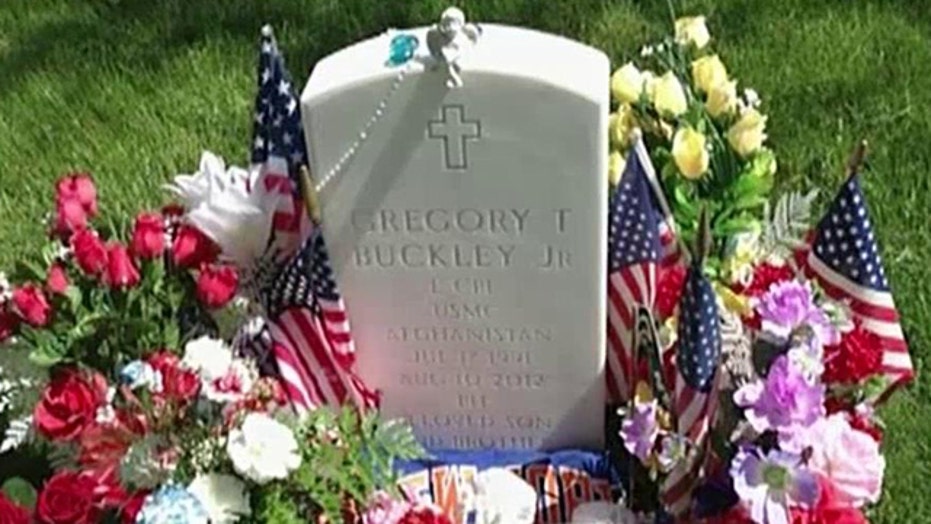 Family of Marine murdered in Afghanistan suing for answers

Claims Marine Corps. has been stonewalling

Three days before he was scheduled to come home, in 2012, Lance Cpl. Buckley was killed in Afghanistan, in the one place he was supposed to be safe.

He wasn't killed in a firefight on a battlefield, or by a roadside bomb while on patrol. The 21-year-old was working out with fellow Marines at the base gym when an Afghan teenager walked in carrying an AK-47 -- and emptied the clip, killing Buckley and two others.

Buckley's family, stonewalled in their search for answers, has since resorted to filing a rare lawsuit against the Marine Corps and Department of Defense. They're not seeking a financial settlement -- they say all they want is information about how their son died in the insider attack.

"He shot my son point blank with an AK-47. Shot him four times in his chest and once in his neck. He was in the gym with a pair of shorts and a tank top on," Buckley's father Gregory Buckley, Sr. told Fox News. "How is that allowed?"

Jan allegedly was involved in selling drugs, uniforms and weapons to the Taliban and brought young so-called "tea boys" on post to serve as sex slaves.

It was one of those alleged "tea boys" who opened fire on the Marines that day in 2012. The shooter, 17 years old at the time, was convicted and sentenced to seven years.

But Buckley's lawyer says the Marine Corps has been blocking the family's efforts to get investigative and autopsy reports, which every Gold Star family is entitled to under federal law.

"They, like any Gold Star families, are entitled to all relevant information and reports about the death of their son. They don't need to beg. They don't need to ask pretty please and they certainly shouldn't have to bring a lawsuit," attorney Michael Bowe told Fox News.

He said an autopsy report exists and "obviously the Marine Corps has uniformed officers who could come and brief the Buckleys." But, he said, they "haven't done any of that."

The Marine Corps told Fox News it could not comment on the matter, because of the pending case.

The 2012 case has raised widespread questions about the U.S. military's handling of the shooting, beyond their treatment of the Buckley family. Some of those questions surround whether the Marines also unfairly punished the whistleblower who, early on, issued a warning about Sarwar Jan.

Jason Brezler, in the summer of 2012, had responded to a request for information from his fellow Marines on Sarwar Jan. However, he sent the response -- with information about Sarwar Jan's checkered background -- from an unclassified, Yahoo account. Brezler was called before a board of inquiry for that error, though Rep. Peter King, R-N.Y., and other supporters argued he was making a good-faith effort to warn his fellow Marines about what "proved to be mortal danger."

In late 2013, the board recommended that Brezler be honorably discharged from the Marines.

The Buckley family attorney has since gone back to court to try and clear Brezler's name, and prevent the Marine Corps from proceeding against him.

Brezler wasn't the only one with concerns about Sarwar Jan and conditions at the base.

Buckley's father told Fox News that his son, before his death, sensed something was wrong at the base, in the Helmand province of Afghanistan.

"He says we have a bad feeling that we are not going to be able to ever get home. I think these people here are going to turn on us. He says they're just not right," Buckley said.

Buckley said: "I want them to admit that they were wrong. And I want someone to be held responsible for my son's death."