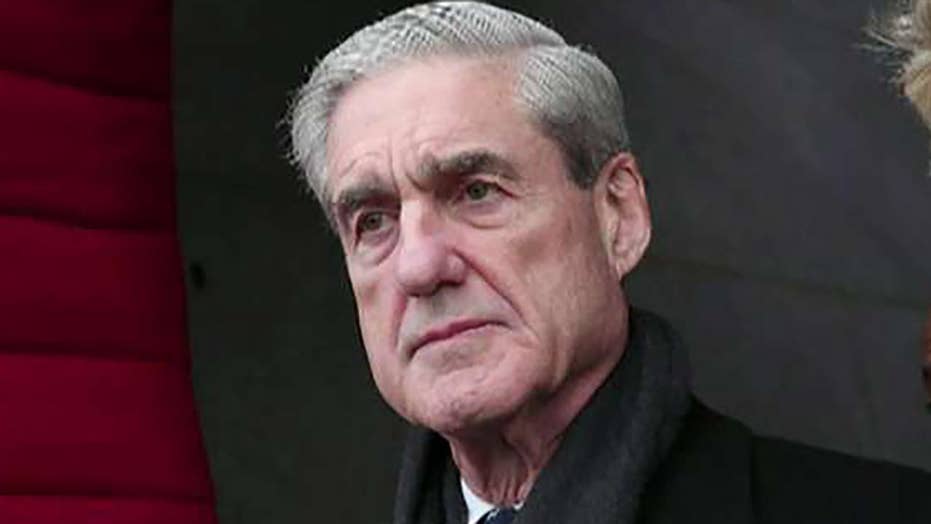 Is the Mueller investigation nearing its end?

Attorney Chandelle Summer on the signs showing the Russia probe could be over in a few weeks.

But in a striking contrast, raising questions about a possible double standard, not a single person interviewed during the FBI’s Hillary Clinton email investigation was hit with false statement charges – even though investigators believed some witnesses were untruthful.

“Somebody needs to be resolving how they exercise discretion, because a whole bunch of people are facing jail time, or flipping in one probe, and the agents openly discussed how other people in the Clinton probe could have been charged with the same offense,” former Justice Department senior official James Trusty told Fox News.

Of the six Trump campaign associates charged in Mueller’s long investigation into Russian meddling in the 2016 presidential election, five have been charged with violating U.S.C. 1001 — making false statements to FBI agents.

But according to the report released in June by Justice Department Inspector General Michael Horowitz on the FBI’s handling of the Clinton email investigation, federal prosecutors and FBI agents told the independent watchdog that witnesses in the probe lied during interviews, but that agents and prosecutors did not pursue false statements charges.

The report revealed one exchange in February 2016 between an agent and another FBI employee not assigned to the investigation. The employee asked the agent how an interview with an unnamed witness went.

“Awesome. Lied his ass off. Went from never inside the scif [sensitive compartmented information facility] at res, to looked in when it was being constructed, to removed the trash twice, to troubleshot the secure fax with HRC [Hillary Rodham Clinton] a couple times, to everytime there was a secure fax with HRC. Ridic,” the agent wrote.

The employee replied: “Wouldn’t it be funny if he was the only guy charged n[sic] this deal?”

“I know. For 1001 [false statements]. Even if he said the truth and didn’t have a clearance when handling the secure fax—aint noone gonna do s—t,” the agent responded.

Another message conversation related to charging witnesses included in the report between agents, and reviewed by the inspector general stated: “What we want to do and what we’re going to be allowed to do are two different things.”

The report specifically referenced former Clinton technology aide Paul Combetta, who allegedly used the computer program “Bleachbit” to destroy thousands of Clinton’s email records, despite an order from Congress to preserve them.

“With respect to Combetta, we found his actions in deleting Clinton’s emails in violation of a Congressional subpoena and preservation order and then lying about it to the FBI to be particularly serious,” the inspector general wrote, noting that they asked prosecutors why they “chose to grant him immunity instead of charging him with obstruction of justice…or making false statements.”

The report revealed that the supervisory special agent, or SSA, in the Clinton case told the inspector general that “he believed Combetta should have been charged with false statements for lying multiple times” but also said that Combetta’s “later immunized testimony was truthful and that he was ‘fine’ with the immunity agreement.”

But Horowitz wrote in the report that he received “mixed testimony” over the potential Combetta charges.

Horowitz noted that agents on the FBI’s Midyear team, the bureau’s code word for the group of agents assigned to investigate Clinton’s use of a private email server and handling of classified information while secretary of state, decided that giving Combetta immunity was “the most expedient way” to obtain truthful information from him, and felt that prosecuting him would not “serve a federal interest.”

According to Justice Department policy, government attorneys should recommend federal prosecution if they believe that the person’s conduct constitutes a federal offense, and that the evidence would be sufficient to obtain a conviction unless “the prosecution would serve no federal interest; the person is subject to effective prosecution in another jurisdiction; or there exists an adequate non-criminal alternative to prosecution.”

“Saying it’s not a federal interest is pure fluff. It’s a circular argument,” Trusty, now white-collar criminal defense attorney with Ifrah Law, said. “We as the feds don’t have a federal interest? They were in the middle of a high-profile federal investigation.”

Horowitz wrote that prosecutors believed immunity was the best option, noting that a truthful Combetta testimony about the deletion of Clinton’s emails was essential to the investigation.

The inspector general ultimately found “no evidence that the conclusions by the prosecutors were affected by bias or other improper considerations.”

But Trusty questioned the principle guiding how and when to pursue false statements charges, specifically in the context of the Mueller investigation.

“Why is there a ‘federal interest’ in Papadopoulos and Flynn and everyone associated with the Russia investigation, but nobody in the Hillary probe?” Trusty asked. “It’s a very legitimate question at this point—why are they taking radically different approaches to the lower subjects in cases for one investigation versus another?”

Flynn pleaded guilty to making false statements to the FBI about his communications with former Russian Ambassador Sergey Kislyak. Last week, Mueller filed a memorandum recommending a lenient sentence for him, with the possibility of no prison time, stating Flynn has offered “substantial” help to the special counsel about “several ongoing investigations,” signaling the former national security adviser’s level of cooperation throughout the probe.

Meanwhile, Papadopoulos, who pleaded guilty last year to making false statements and materially false omissions to federal investigators about his meeting with an overseas professor with connections to the Russian government, completed his 14-day prison sentence on Friday. He is also required to pay a fine of $9,500 and complete 200 hours of community service.

Last month, Cohen, who pleaded guilty in August to multiple tax-related and business charges in a separate criminal investigation led by the U.S. Attorney’s Office in the Southern District of New York, pleaded guilty to making false statements to Congress about the timeline of discussions about an abandoned deal to build a Trump Tower in Moscow. Cohen’s plea agreement with the special counsel made clear that as part of the deal, Cohen would cooperate with Mueller’s team on “any and all matters” deemed relevant. Despite his cooperation, though, federal prosecutors on Friday stated that Cohen deserved a “substantial term of imprisonment,” and argued that Cohen’s efforts to cooperate with the special counsel were “overstated.”

Van der Zwaan, who was an associate of Manafort, pleaded guilty to making false statements earlier this year and was sentenced in April to serve 30 days in prison. He was required to also pay a $20,000 fine.

The special counsel’s office declined to comment on charging decisions.

Trusty said that guilty pleas related to false statements “does not suggest a particularly successful investigation.”

“It doesn’t suggest to me that they’re making a lot of headway on the substance of their investigation, which is Russian collusion,” Trusty said. “As an ex-prosecutor, false statements are a very distant second place.”