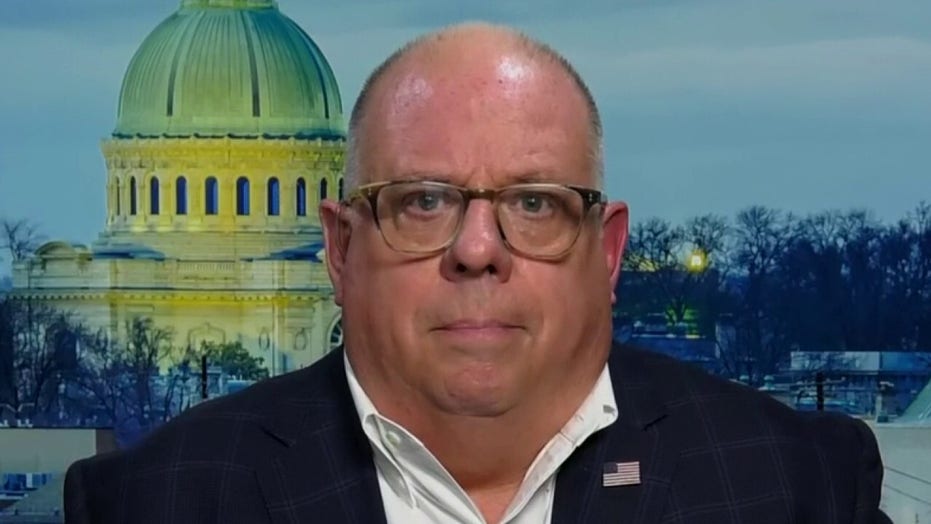 Maryland Gov. Larry Hogan weighs in on getting the economy back on track in a safe way and how the federal government is responding to his state's needs on 'America Together: Returning to Work.'

EXCLUSIVE: Maryland Gov. Larry Hogan, in his upcoming memoir titled "Still Standing," dispenses scathing criticism of former Baltimore Mayor Stephanie Rawlings-Blake, State's Attorney Marilyn Mosby and others over their handling of the city's 2015 riots, an event that foreshadowed the widespread racial unrest seen in other American cities in recent weeks.

Several chapters addressing the 2015 riots were obtained by Fox News in advance of the book's publication later this month.

The Republican governor describes the rapid mobilization of the state police and National Guard as he and his advisers realized the seriousness of the situation brewing in Baltimore following the death of Freddie Gray in police custody, and he shares his mindset as he dealt with the crisis just months into his first term as governor. He also talks about the human side of attempting to heal the divided city, quoting advice he received from then-New Jersey Gov. Chris Christie about the need to be a "consoler in chief."

But Hogan, whose book has fueled speculation about possible 2024 ambitions, also doesn't hold back criticism of officials he says either didn't help the situation or made it worse, with Rawlings-Blake front and center.

Hogan, throughout the chapters, returns again and again to actions and comments from the then mayor that he characterizes as either too meek in the face of a growing crisis or out of touch with reality. Hogan used the word "dreadful" to describe comments Rawlings-Blake made in the early stages of the riots about giving "those who wished to destroy space to do that as well."

"What did she just say? 'Space' for 'those who wished to destroy'?" Hogan wrote. "I could hardly believe my ears. ... In other words, unless the gang members and the out-of-town agitators injured or killed someone, the mayor was going to let them destroy property and cause other kinds of mayhem. It was as close to a hands-off response to urban violence as I had ever heard from a political leader. It was dangerous and reckless, and it threatened innocent lives and property."

Rawlings-Blake, Hogan wrote, was a consistent problem as he attempted to restore order to his state's largest city. According to Hogan, she resisted a state declaration of emergency until Hogan pressured her into acquiescing to one; attempted to prematurely remove the citywide curfew in Baltimore until Hogan threatened to go on television and "say that the mayor has completely lost her mind, and as governor in a state of emergency, I am immediately reinstating a curfew;" and failed to have the backs of police officers who were responding to the violence in her streets.

"'The mayor abandoned us,'” Hogan quoted a police officer in the hospital as telling him. "'She ordered us to stand down. We were sitting ducks out there. We needed to defend ourselves the way we were trained to.' He started to cry."

At the time, Rawlings-Blake said her remarks were taken out of context and that she did not tell police to let protesters commit acts of violence. "[W]e worked very hard to put ourselves in the best position to deescalate those instances," she wrote.

Hogan noted another contentious interaction he had with the mayor over the feelings of street gangs, reflecting the law-and-order approach he generally took to the 2015 riots. That approach has been advocated by President Trump and other Republicans in 2020 as peaceful protests over the death of George Floyd escalated into violence in some cities. Minneapolis and other cities recently saw rioting, looting and vandalism while others like Seattle watched a six-block area be taken over by anti-police activists for weeks. The so-called CHOP zone in Seattle saw several shootings and two deaths in its roughly three-week existence.

"'[T]he gang leaders are really angry,' the mayor said to me," Hogan wrote, recounting a conversation with Rawlings-Blake. "'They’re demanding that if we don’t ...' 'Did you just say, ‘The gang leaders are angry’?' I thundered at the mayor. She nodded. 'So what?' I shot back.'"

Hogan continued, quoting Rawlings-Blake: "'The gangs are threatening that if we don’t lift the curfew, they’re going to march downtown and burn down the Inner Harbor.' 'You tell them to go ahead and make my day,' I said. 'Tell them to come on down, I’ll be waiting for them, and several hundred state troopers and National Guard soldiers will be waiting for them.'"

The governor in recent days has also come out with a tough stance against those who would remove certain statues. He vocally condemned vandals who tore down a Christopher Columbus statue in Baltimore and threw it in the inner harbor; ripped House Speaker Nancy Pelosi for apparent ambivalence on the matter; and said he was "disgusted" by a Baltimore city councilman who said he supported the removal of a memorial to fallen police officers.

Hogan, in his book, also critiqued former President Barack Obama for initially backing a softer approach to the riots.

"I assumed he was calling to offer federal assistance to the state of Maryland," Hogan said of the moment he got a phone call from Obama. "Boy, was I wrong. 'I’m calling to express my concern,' he continued. 'I’m concerned that your actions could potentially inflame an already tense environment. My strong advice would be that you exercise caution and restraint in the city. Because it is a volatile situation.'"

Hogan said he at no point considered backing down: "He couldn't stop me. I was the governor." And Obama later changed his tune, condemning the "senseless violence and destruction."

Hogan in the book made clear the president was respectful on the call.

In the book, Hogan also said CNN's Don Lemon was a "jerk" during a joint interview he and Rawlings-Blake gave to the anchor. The governor was even critical of Freddie Gray as he pushed back on those downplaying his history, calling him "a Crips gang–connected, street-level drug dealer with a long criminal rap sheet, well known to the Baltimore City police." And he condemned the handling of the Freddie Gray case by Baltimore State's Attorney Marilyn Mosby: "Was she announcing a sound prosecutorial judgment or leading a protest rally? Frankly, it was hard to tell."

Hogan noted that an investigation by the Baltimore Police had found "no wrongdoing whatsoever" on the part of the officers who handcuffed Gray before putting him into a police van, and that Mosby failed to secure any convictions against the offers she charged in relation to Gray's death.

Outside of the harsh criticism he doled out primarily at Democratic political figures, Hogan spoke about his efforts in the community in the wake of the unrest.

He recalled a moment he struck up a conversation with a group of apparent gang members despite advice from police officers who were protecting him.

"'I know you guys have a lot of things on your mind,' I said, not sure how they’d respond to that. But they began to speak. One of them mentioned the mayor closing community centers. Another brought up the lack of jobs and the poor city schools," Hogan wrote.

"'I understand,' I told him. 'And you know what? You’ve got the right to be mad about the schools and the community centers and some of the failures here in the city,'" Hogan continued.

Hogan said the conversation ended with him taking selfies with all of the men.

On how to deal with potential unrest, Hogan harkened back to former President Ronald Reagan, for whom he twice served as a delegate to the Republican National Convention.

"To me, it was crucial to make an overwhelming show of police and military strength," Hogan said. "I didn’t want there to be any doubt that we had all the force we needed. But if we showed enough strength, I figured we might not have to use it."

He added: "This was Ronald Reagan’s idea, peace through strength, the very same concept I learned about as the chairman of Youth for Reagan. I hadn’t forgotten. And all these years later, it came in handy again."