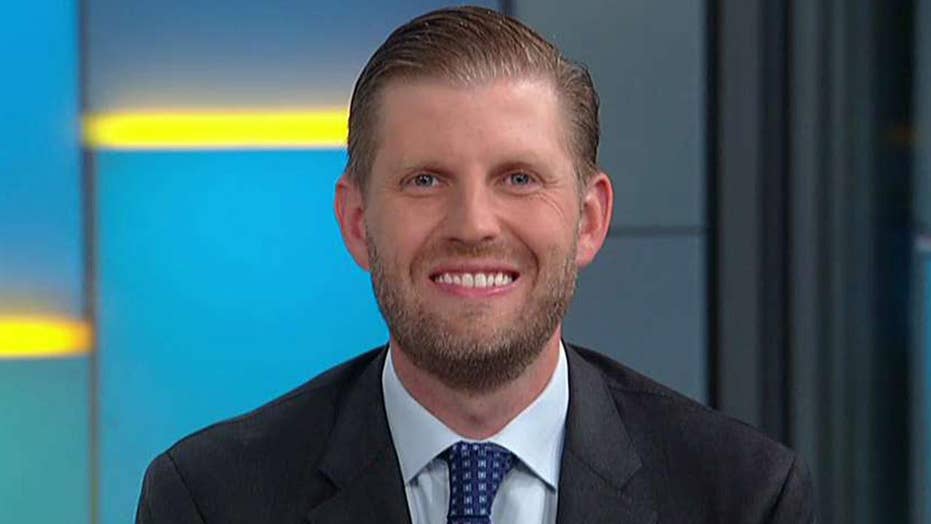 Executive vice president of the Trump Organization Eric Trump speaks out on 'Fox &amp; Friends' after the House votes to condemn the president's remarks on freshmen Democrat congresswomen.

Eric Trump said Wednesday on Fox & Friends that Democrats have "no message" to bring to the American people, so they're resorting to "name-calling" and accusations of racism against President Trump.

"This is the most hate-filled group I've ever seen before," he said, calling out anti-Semitic statements and calls to abolish ICE, which led to a protest over the weekend in which demonstrators pulled down an American flag and hoisted a Mexican flag in its place at a Colorado ICE facility,

Host Steve Doocy countered that it was Trump's father's "go back" tweets over the weekend that triggered the cascade of criticism and allegations that the president is a "racist." Doocy noted that even Republicans have said the tweets crossed the line.

"I love the tweet, if you don't love our country, leave," the executive VP of the Trump Organization responded, comparing the United States to other countries.

"I'm not saying America doesn't have certain problems. Go see the conditions around the world and you'll be so fortunate you live here. We are blessed to live in this country."

The tensions erupted Tuesday on the House floor as Georgia Republican Rep. Doug Collins demanded that Nancy Pelosi's words be stricken from the public record after the House Speaker condemned the "president's racist tweets."

The Democrat-controlled House then voted along party lines not to strike Pelosi's words from the record and voted separately to restore her speaking privileges. A resolution was then passed to condemn Trump's "go back" remarks directed toward four freshmen Democratic women.

Host Brian Kilmeade asked Eric Trump whether the president should have stayed out of the fight between Pelosi and the so-called "squad," comprised of Reps. Alexandria Ocasio-Cortez, D-N.Y., Ilhan Omar, D-Minn., Ayanna Pressley, D-Mass., and Rashida Tlaib, D-Mich.

The president's son responded that Pelosi used to be the "far-left fringe" in the Democratic Party, but she now looks like a moderate. He said the Democrats have gone from the "party of JFK" to embracing socialism and he believes it will lead to his father's re-election in 2020.