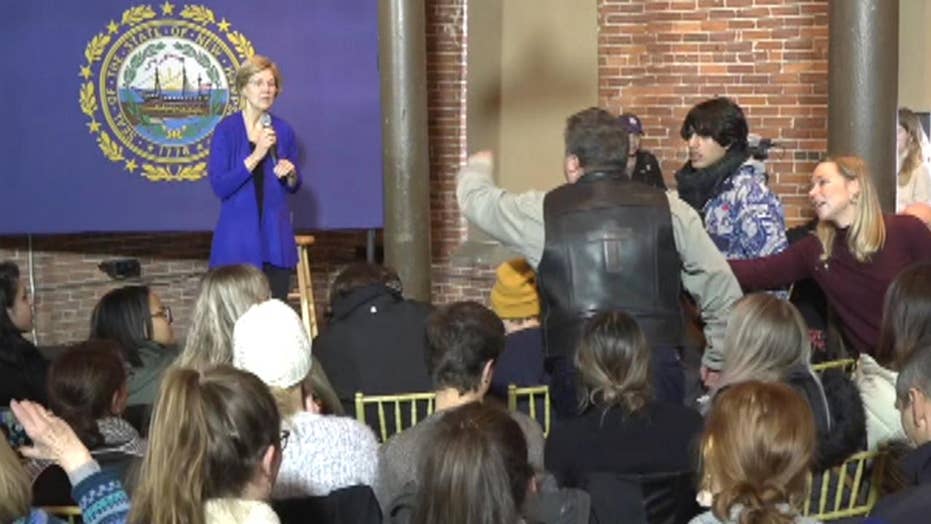 DOVER, N.H. -- An irate protester interrupted the start of Democratic presidential candidate Elizabeth Warren’s campaign event here Friday, angrily accusing the Massachusetts senator of “siding with terrorists” amid the conflict between the United States and Iran.

As soon as Warren took to the mic at the town hall–style event, the man charged to the front of the room and began yelling.

“You’re siding with Iran,” the protester said to Warren, before being ushered out. “Why are you siding with terrorists?”

He also told her: “Hope you resign.”

Warren responded as the crowd booed at the protester: “This is a man who’s deeply upset. It’s all right. It’s time for you to leave.”

Conservatives in recent days have slammed Warren over her comments criticizing the United States' killing of Iranian Gen. Qassem Soleimani, especially after she held back criticism of Soleimani himself and said it was "reasonable" to ask whether Trump ordered the killing to distract from his pending Senate impeachment trial.

The outburst comes as Republicans have faced pushback over similar language. Rep. Doug Collins, R-Ga., apologized Friday after claiming in a television interview that Democrats are “in love with terrorists.”

Warren talked about the protester when she gaggled with reporters when the town hall was over.

Warren also slammed Collins’ initial comments about Democrats: “I think it is disgusting for a congressman to stand up and say that he believes that kind of nonsense.”

After the town hall, Warren spent over an hour taking pictures with supporters. The campaign has gotten widespread attention for that practice and the candidate often talks up her commitment to taking “selfies” with voters.

Social media users, though, often point out the photos are not technically selfies, since Warren staffers usually take them.

Asked about that, Warren defended the terminology: “People get a picture on their own phone. ... I think it goes within the big definition. Everybody has fun and that’s what it’s all about.”