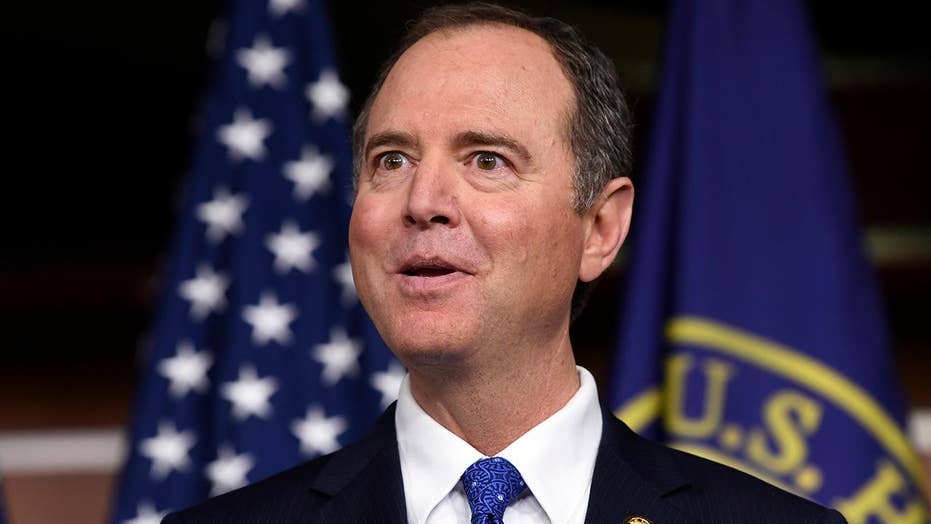 Does Adam Schiff's report show a case for impeachment?

Gregg Jarrett, AshLee Strong and Kevin Walling debate on 'Fox &amp; Friends' as the House Judiciary Committee begins the next phase of the Trump impeachment inquiry.

House Intelligence Committee Chairman Adam Schiff is attempting to use phone records to bolster the impeachment case against President Trump, but the White House reportedly says he has the wrong number.

Democrats on the House Intelligence Committee claimed in their impeachment inquiry report this week that Trump’s personal lawyer Rudy Giuliani over the summer had contact with a phone number for the White House budget office where military aid to Ukraine was temporarily being withheld. However, Trump administration officials are disputing that finding, saying the phone number presented as evidence for the claim is not linked to that office.

Schiff, D-Calif., released the panel’s findings from the months-long impeachment inquiry into Trump on Tuesday before transmitting the report to the House Judiciary Committee for the next phase of the process.

In that report, Democrats provided call logs that appeared to show that on August 8, Giuliani “texted several times with a number associated with the White House.”

The report notes that the committee was unable to identify the specific White House official associated with the phone number, but said that, later, a number associated with the Office of Management and Budget (OMB) called Giuliani for a phone discussion that lasted almost 13 minutes.

The report also states that Giuliani called “the OMB number” “several more times” that evening, but did not connect for more than “a few seconds.”

But “the OMB number,” according to the Wall Street Journal was not directly associated with the Office of Management and Budget, and Giuliani, instead, could have been having a call with another part of the White House. The New York Times also reported that “the OMB number” was actually a general White House switchboard number, which makes it difficult to determine who Giuliani was speaking with at the White House.

“No one from OMB has talked to Giuliani,” a White House spokesperson told RealClearPolitics this week, noting that the calls were not coming from their office.

A House Intelligence Committee official told Fox News Friday afternoon that the committee identified the number that appeared to be "associated with OMB" based on public directories. The official said that the committee is continuing to investigate the call records and whether the number may indicate calls received from elsewhere in the White House.

The official also told Fox News that, despite White House officials pushing back on the notion that Giuliani was calling a number "associated with OMB," they do not contest that the calls with Giuliani originated within the White House, which they said confirms that he was in frequent contact with individuals at the White House during the time military aid was being withheld.

“If the Democrats are going to attack their political opponents, staff members, and even journalists by publishing their phone records, you’d really think they’d at least get the phone numbers right," Langer told Fox News.

The section of the report referencing the Giuliani calls, however, is being used as evidence of his direct involvement and regular contact with the White House during the critical period over the summer when nearly $400 million in military assistance was being withheld from Ukraine—an arrangement Democrats have cited as a “quid pro quo.”

At the center of the impeachment inquiry, which began in September, is Trump’s July 25 phone call when he pressed Ukrainian President Volodymyr Zelensky to investigate former Vice President Joe Biden and his son Hunter Biden’s business dealings in Ukraine. That call prompted a whistleblower complaint to the intelligence community inspector general, and in turn, the impeachment inquiry in the House. Trump challenged the accuracy of the complaint, though the transcript released by the White House did support the core allegations that he pressed for politically related investigations.

The president’s request came after millions in U.S. military aid to Ukraine had been frozen, which Democrats and witnesses have claimed shows a "quid pro quo" arrangement, and argue that military aid and an Oval Office meeting with Zelensky was being withheld until the public announcement of an investigation into the Bidens and issues related to the 2016 presidential election. Trump denies any wrongdoing.

Meanwhile, House Speaker Nancy Pelosi, D-Calif., said Thursday morning that Democrats will proceed with articles of impeachment against President Trump, claiming the president’s conduct left Democrats with “no choice but to act.”