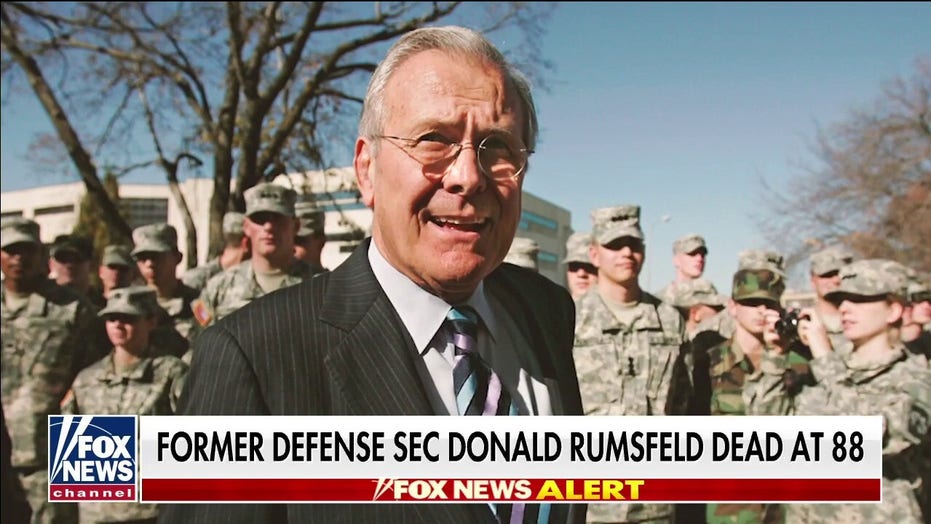 Donald Rumsfeld, the long-time American politician and former defense secretary, has died at the age of 88, his family announced.

Donald Rumsfeld, who charted an impressive Washington career serving under four presidents but whose legacy largely was defined by his controversial tenure as defense secretary during the Iraq War, has died, his family announced Wednesday. He was 88.

Rumsfeld, a confident adviser to power with a trenchant style that made him admirers as well as enemies, had a long and winding career in public life that spanned five decades. He had been a congressman and a White House chief of staff, and had a successful corporate career, too. But it was his second term as secretary of defense from 2001 to 2006 – during the most tumultuous period of the Iraq and Afghanistan wars – for which he is most known.

"It is with deep sadness that we share the news of the passing of Donald Rumsfeld, an American statesman and devoted husband, father, grandfather and great grandfather," Rumsfeld’s family said in a statement. "At 88, he was surrounded by family in his beloved Taos, New Mexico. History may remember him for his extraordinary accomplishments over six decades of public service, but for those who knew him best and whose lives were forever changed as a result, we will remember his unwavering love for his wife Joyce, his family and friends, and the integrity he brought to a life dedicated to country."

While his time as President Gerald Ford’s defense secretary was dominated by lofty management challenges regarding the direction of America’s changing military, his role under President George W. Bush was quite different — and set in an instant.

Then-Secretary of Defense Donald Rumsfeld during a briefing with Chairman of the Joint Chiefs of Staff, Marine General Peter Pace, at the Pentagon March 7, 2006 in Arlington, Virginia.   (Brendan Smialowski/Getty Images)

On 9/11, just months into the Bush presidency, Rumsfeld was in his office in the E-Ring at the Pentagon. While monitoring the attacks on the Twin Towers in Manhattan, the Pentagon was hit with a third hijacked plane.

"I went outside and there were little pieces of metal spread all over the grass, and the smoke was billowing up, and the flame was very visible and leaping out of the building," he once described.

After the attacks, Rumsfeld was part of a senior-level effort, which also included Vice President Dick Cheney, to marshal war against Al Qaeda and the Taliban in Afghanistan. But then their sights were turned to Iraq, where he and others insisted Saddam Hussein was hiding weapons of mass destruction. During the beginning of the war, his off-the-cuff and sometimes acerbic style made the press conferences events in themselves. He rode a wave of popularity and never conceded that the war was not going as well as his press people were saying publicly.

But then things started to go wrong — abuse of detainees by U.S. soldiers was exposed in the Abu Ghraib prison in 2004.

When asked by a young soldier at a town meeting when they would get more armored vehicles, Rumsfeld famously said, "As you know, you go to war with the army you have — not the army you might want or wish to have at a later time."

As casualties mounted and no WMDs were found, the press turned on him. When it was clear the insurgency could not be ignored and casualties were much higher than expected, he began facing pressure to resign. He resisted those calls until the 2006 midterms, when Democrats knocked Republicans out of power in Congress. Bush replaced Rumsfeld with Robert Gates.

Former President George W. Bush and Defense Secretary Donald Rumsfeld attend a ceremony to mark the 18th anniversary of the 9/11 attacks, on Sept. 11, 2019, at the Pentagon in Washington, DC.  (MANDEL NGAN/AFP via Getty Images)

The resignation marked the end of Rumsfeld’s long public career, though he did not fade from public view — he made media appearances and released "Known and Unknown: A Memoir" in 2011.

Rumsfeld’s political career started early in life. Born in 1932 in Evanston, Illinois, he was an Eagle Scout and athlete who graduated from Princeton. He served in the Navy as a naval aviator and flight instructor from 1954 to 1957, and later as commander of an anti-submarine squadron in 1960. (He retired from the Reserves as a captain in 1989.)

But his love seemed to be politics and in 1957 Rumsfeld went to work for Republican Rep. Robert P. Griffin of Illinois, and won his first election – to the U.S. House of Representatives in 1962 -- at the age of 30. On the home front, he was already starting a family, having married Joyce P. Pierson in 1953. They had three children, two daughters and a son.

Rumsfeld continued to represent the 13th District of Illinois for three more terms before resigning to work in various roles in the Nixon administration, most notably the Office of Economic Opportunity. During this time, he hired old friends Frank Carlucci and Dick Cheney. All three would become secretaries of defense in subsequent administrations.

PUTIN: US AND BRITAIN BOTH BEHIND BLACK SEA 'PROVOCATION'

In 1973, Rumsfeld became ambassador to NATO, where he oversaw a number of Cold War matters ranging from the nuclear weapons arms race to the conflict between Turkey and Cyprus. Nixon resigned in 1974 and Rumsfeld was called back to serve as President Ford’s transition chairman, his chief of staff and then secretary of defense. He oversaw the post-Vietnam transition to an all-volunteer military while ramping up spending and the U.S. arsenal. He was awarded the Presidential Medal of Freedom in 1977.

Rumsfeld’s time in Washington did not seem appreciated by all. Former Secretary of State Henry Kissinger, who at times clashed with Rumsfeld, once said he was "a special Washington phenomenon: the skilled full-time politician-bureaucrat in whom ambition, ability, and substance fuse seamlessly."

Donald Rumsfeld was secretary of defense for the Ford administration. He was one of the youngest men ever to be picked for the post.

For the first time since a short stint in the private sector after Princeton, Rumsfeld left civil service and politics for the corporate world, heading worldwide pharmaceutical company G.D Searle & Co., as well the General Instrument Company and the board of Gilead Sciences.

During this time he did not abandon Washington altogether. He served on a number of national commissions and as envoy to the Middle East for President Ronald Reagan in 1983. It was during this time, on a trip to Baghdad, that he met Iraqi President Saddam Hussein. They forged ties in a mutual opposition to Iran. Some 30 years later, Rumsfeld would be using the entire might of the U.S. military to depose Saddam instead.

Years later, in his memoir, Rumsfeld acknowledged that the weapons of mass destruction were never found and mistakes were made in the pre-war assessments (he had said he knew where they were at the time). He also apologized for his infamous "stuff happens" response when asked about the looting of Baghdad’s artifacts in the immediate aftermath of the 2003 invasion.

Rumsfeld went back to the private sector after his resignation, sitting out the subsequent Democratic administration, and writing his memoir. He also released many of his papers at the time and made scattered media appearances, remaining one of the more controversial figures of the war period.

Despite that, in February 2011, fellow conservative Republicans awarded Rumsfeld the "Defender of the Constitution Award" at the 2011 Conservative Political Action Conference in Washington.