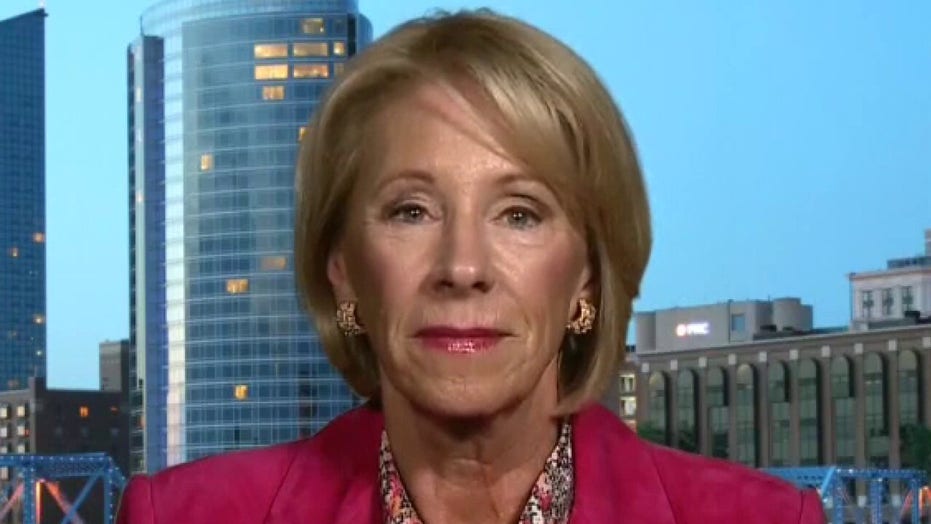 A Washington federal judge Friday tossed out Secretary of Education Betsy DeVos' policy that would have funneled millions in coronavirus relief to private schools in a ruling that has nationwide impact.

U.S. District Judge Dabney Friedrich, a President Trump appointee, vacated the plan DeVos unveiled this summer to divert more of the $16 billion Congress passed in emergency K-12 education funding away from public schools to private schools. The judge found the rule was unlawful and DeVos' action to better help private schools contrary to Congress' intent for the money under the CARES Act legislation.

"Thus, the Department’s interim final rule, which conflicts with the unambiguous text of the statute, is void," Friedrich said in her 13-page ruling.

The ruling was in response to a lawsuit filed by the National Association for the Advancement of Colored People (NAACP), public school districts, families and other pro-public school advocates who sued DeVos in federal court. They were concerned that DeVos' rule, which laid out a new formula for allocation of coronavirus funds, would divert resources away from public schools, whose enrollment is majority non-white, to private schools, with more white and affluent student bodies, data show.

Some states filed separate lawsuits to overturn DeVos' rule, including Washington, Michigan, California, Maine, New Mexico and Wisconsin. Unlike judges in those cases who issued only preliminary relief, the federal judge Friday made a permanent decision with nationwide scope, said Wendy Lecker, senior attorney at the Education Law Center, which represented the plaintiffs.

"This is a summary judgment, so the case is closed," Tamerlin Godley, another attorney for the plaintiffs, told Fox News.

Godley, a partner at Munger, Tolles and Olson LLP, said the ruling sends a "powerful" message coming from a federal judge in D.C. and a Trump appointee.

"It's a strong statement that this was not lawful," she said.

The Trump administration could appeal the ruling to try to reinstate the policy. A spokesperson for the Education Department Angela Morabito told Fox News Saturday: "We’re studying the decision and considering our options."

The court ruling was first reported by Politico.

Congress passed the more than $2 trillion CARES Act in March. The massive economic stimulus program addressed the coronavirus pandemic and economic fallout. More than $16 billion was included between two funding programs for K-12 schools: $13.2 billion for the Elementary and Secondary School Education Relief Fund and another $3 billion that governors could use for districts significantly impacted by COVID-19.

DeVos, a longtime advocate for school choice, announced in June a Department of Education rule on how local school districts could spend the money. Instead of allocating funds to private schools based on the number of low-income students in them, she wanted the figure to be based on total private school enrollment in the district, a much larger number. If districts didn't abide by the formula, how they used their funds could be restricted.

DeVos framed the action as a more equitable way to distribute funds to students regardless of their school.

“The CARES Act is a special, pandemic-related appropriation to benefit all American students, teacher, and families impacted by coronavirus,” DeVos said at the time. “There is nothing in the law Congress passed that would allow districts to discriminate against children and teachers based on private school attendance and employment."

"Getting it fully vacated means everything is set," Godley said. "They know what their budgets are going to be, and we've minimized the amounts that are going to have to go out to private schools."