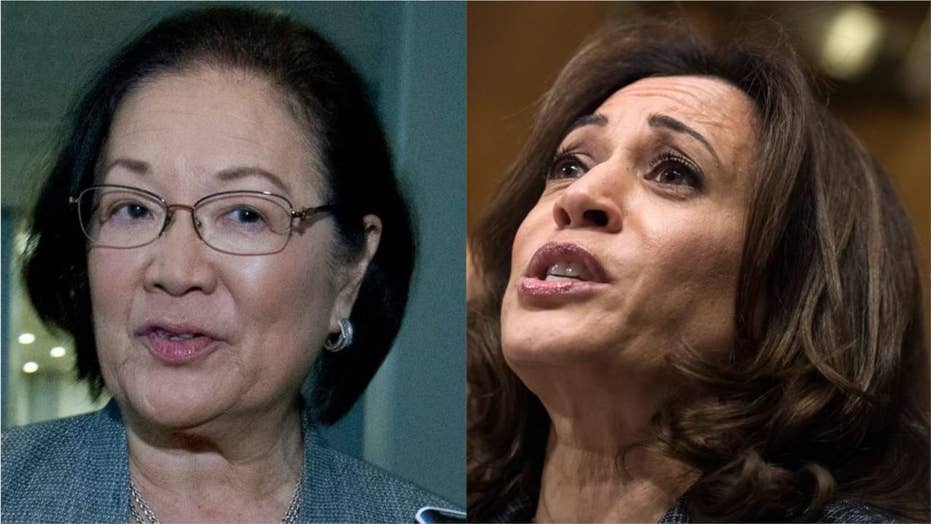 Following questions from multiple Democratic senators over the impartiality of Trump judicial nominee Brian Buescher and his ties to the Knights of Columbus, a charitable Roman Catholic organization, Republicans and various religious leaders hit back Monday against “religious bigotry.”

“This isn’t just about the Knights of Columbus or Catholics, this is an ongoing attack from the extremist left of the Democratic Party to silence people of faith and run them out of engaging in public service based on their religious beliefs,” Penny Nance, the president of Concerned Women for America, a Christian women’s activist group, said in a written statement.

“It is pure and simple religious bigotry,” Nance added.

Sens. Kamala Harris, D-Calif., and Mazie Hirono, D-Hawaii, recently raised concerns about Buescher's membership as part of the Senate Judiciary Committee's review of his nomination by President Trump to sit on the U.S. District Court in Nebraska.

Harris meantime, in her questions to the nominee, called the Knights of Columbus “an all-male society” and asked the Nebraska lawyer if he was aware that the group was anti-abortion and anti-gay marriage when he joined. The California senator also referenced Supreme Knight Carl A. Anderson’s statement that abortion amounted to “the killing of the innocent on a massive scale” and asked Buescher if he agreed with the statement.

“The Knights of Columbus does not have the authority to take personal political positions on behalf of all of its approximately two million members,” Buescher wrote in reply to the queries. “If confirmed, I will apply all provisions of the Code of Conduct for United States Judges regarding recusal and disqualification.”

Prominent Republicans and religious leaders backed Buescher in the face of the questions.

“Hopefully, in the eyes of Democrats you are not disqualified to a be a judge because of your religious affiliations and beliefs,” GOP South Carolina Sen. Lindsey Graham tweeted. “The Knights of Columbus are a Catholic charitable organization who have genuinely held beliefs about marriage & abortion.”

“Will not tolerate disqualifying judicial nominees because of charitable works and personal religious opinions,” Graham wrote in a follow-up tweet.

"The Black Church is very concerned because we know that when elected leaders attack Catholic organizations like the Knights of Columbus for believing timeliness Christian principles, then all people of faith are at risk,” Rev. Eugene F. Rivers III, a civil rights leader and the director of the Seymour Institute for Black Church and Policy Studies, said in a statement.

“There is no place for a religious test like this in our country,” he continued. “Our constitution forbids it and elected leaders should know better than to try to impose it."

This is the kind of thuggish behavior we expect from third world dictators, not United States Senators.

"This is the kind of thuggish behavior we expect from third world dictators, not United States Senators," Ken Blackwell, a former U.S. Ambassador to the United Nations Human Rights Commission, said in a statement. "That this attack on Catholics comes from the party of John F. Kennedy, who was proudly a Knight of Columbus, is particularly shocking and egregious. There should be no religious test in America, and I call on my Democratic friends to end this tactic of engaging in religious discrimination to destroy people nominated for public office."

“Alarming questions from Senate Democrats, showing they are getting more and more comfortable with imposing religious tests on Federal judicial nominees,” the office of Sen. Orrin Hatch, R-Utah, tweeted over the weekend.

Kathleen Blomquist, a spokeswoman for the Knights of Columbus, blasted the questions by Hirono and Harris as a throwback to past anti-Catholic rhetoric.

Despite the pointed questions of the nominee and the implications of the interrogations, Knights of Columbus Senior Vice President Kevin Shinkle said the organization has valued the backing it's received.

“The Knights of Columbus is grateful for the support of so many people who recognize our charitable efforts and understand that mainstream religious beliefs shouldn’t disqualify anyone from serving their country,” Shinkle said in a statement to Fox News.