In the early stages of the Biden administration, some of the key political battles aren't revolving around governing philosophies or federal spending or culture wars. Instead, they're about the definitions of words.

Words like "infrastructure," "court-packing" and "bipartisan" are being defined very broadly by Democrats as they try to message their policy proposals to the American people. Republicans, meanwhile, are objecting loudly to what they say is an effort to repackage unpopular policies, and are pushing a more restrictive definition of these words.

"What is infrastructure?" Politico Playbook wrote earlier this month, asking a question that may appear on a sixth-grade vocabulary quiz. "That’s a question that will dominate politics for the spring and summer."

That question is such a big deal because the White House is selling its recently announced spending package as an infrastructure plan. But Republicans say that much of what is in the package isn't actually infrastructure. 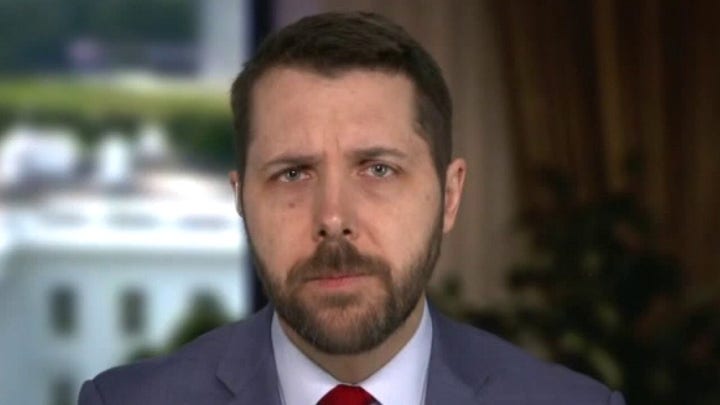 "I think we really need to update what we mean by infrastructure for the 21st century," National Economic Council Director Brian Deese said on "Fox News Sunday." Deese said affordable housing, for example, could be considered infrastructure because it lets people live where they can get jobs.

Deese and other supporters of Biden's spending plan have also argued that the $400 billion it directs for home care of elderly and disabled people represents "care infrastructure." Such spending will help those responsible for caring for others keep or get jobs, he said.

"In Biden’s Washington, words have no meaning. If the White House supports something, then it’s ‘emergency COVID-19’ relief or ‘infrastructure.’ If they oppose it, then it’s a ‘Jim Crow relic.' No matter what it is,'" a Senate Republican aide told Fox News. "Aside from being intellectually lazy, it’s also flat-out Orwellian. Some might also call it a lie."

"We are all infrastructure now," the subject line of an email from the office of Senate Minority Leader Mitch McConnell, R-Ky., read. McConnell and other Republicans have argued that only about 6% of Biden's plan goes to roads and bridges, the image that comes to most people's minds when they think of infrastructure.

But a Fox News analysis of Biden's plan indicates that when including other things in the plan that are infrastructure – like broadband, water pipes and Amtrak – the total is actually just under 40%.

GRANHOLM ARGUES 'INFRASTRUCTURE' MEANING IS OUT OF DATE, DESPITE MOCKERY FROM REPUBLICANS

A more recent flashpoint in the war over words is the meaning of "court-packing."

The term was coined in the 1930s. Former President Franklin Delano Roosevelt, out of frustration with the Supreme Court's rulings on his New Deal, pushed a plan to increase the number of justices so he could appoint several who would be more likely to support his policies.

The term "court-packing" was coined when former President Franklin Delano Roosevelt's attempted to add justices to the Supreme Court so he could appoint justices more friendly to his New Deal programs. (Photo by Hulton Archive/Getty Images)

The Supreme Court then suddenly began ruling for the New Deal's provisions, and the court-packing effort never came to fruition.

President Biden, as a senator decades ago, described Roosevelt's court-packing push as a "bonehead idea."

Now, however, there is growing momentum on the left in favor of packing the Supreme Court. It stems from frustration with the rulings by the justices, six out of nine of whom were appointed by Republicans. Biden ordered a commission to study court-packing, among other judicial issues. And a handful of congressional Democrats introduced a court-packing bill.

One of Democrats' talking points: that efforts to fill judicial vacancies by former President Donald Trump and McConnell amounted to court-packing.

"Republicans have already packed the Supreme Court. Unpack it by making it bigger," a column by USA Today writer Todd Gitlin was titled.

"Some people will say we're packing the court. We're not packing. We're unpacking," House Judiciary Committee Chairman Jerrold Nadler, D-N.Y., a sponsor of the bill to pack the Supreme Court, said at a press conference. "Sen. McConnell and the Republicans packed it over the last couple of years."

The word "bipartisan" is yet another term Democrats are stretching to the limit in recent weeks.

Not a single Republican member of Congress supported Biden's coronavirus stimulus and none are behind his more recent spending plan. But the president and his aides are claiming both are bipartisan because some polls show a majority of Republicans support them.

"If you looked up ‘bipartisan’ in the dictionary, I think it would say support from Republicans and Democrats," senior Biden adviser Anita Dunn told the Washington Post. "It doesn’t say the Republicans have to be in Congress."

Biden senior adviser Mike Donilon said the president's new definition of "bipartisan" is "an agenda that unifies the country and appeals across the political spectrum."

This has left many Republican lawmakers fuming, especially those who tried to negotiate with Biden on coronavirus relief but were rebuffed.

"Fewer than 24 hours after our meeting in the Oval Office, the Senate Democratic leader began the process of triggering reconciliation, which precluded Republican participation and allowed for the package to pass without a single Republican vote," a group of 10 Republican senators said in a scathing statement earlier this month.

"Watch what the White House does. Not what they say," the Senate GOP aide told Fox News. "And what they’re doing is working to pass the most progressive legislation possible through as many partisan processes as they can find before they lose the House in 2022."

The White House did not respond to a request for comment for this story.

Other recent syntax-related political spats: "riots" vs. "peaceful protests" and "illegal aliens" vs. "undocumented non-citizens." There's also debate over whether the situation on the southern border amounts to a "crisis." Biden seemed to acknowledge that over the weekend – which Republicans gleefully pointed out – before White House press secretary Jen Psaki walked back the statement Monday.

Attempts to parse the definitions of words or change language, of course, are not new among Washington politicians. Republicans as recently as 2013 used the same rhetorical crutch on court-packing as Democrats are using now.

Whitehouse also noted that Sen. Mike Lee, R-Utah, said Obama aimed to "pack the D.C. Circuit with unneeded judges simply in order to advance a partisan agenda." Other Republicans made similar points, using the term court-packing to describe the standard process of nominating and confirming judges.

And perhaps no questioning of the definition of words is as famous as the infamous quote from former President Bill Clinton. During the investigation of his affair with Monica Lewinsky, Clinton claimed he was not lying when he told aides that "there's nothing going on between us."

"It depends on what the meaning of the word 'is' is," Clinton said, relying on a "tense-based distinction," according to investigators.

"If the – if he – if 'is' means is and never has been, that is not – that is one thing. If it means there is none, that was a completely true statement," Clinton said.