Rep. Cawthorn on future of GOP: 'Time for Republicans to go on the offensive'

The youngest member of Congress, Rep. Madison Cawthorn, R-N.C., on the future of the Republican Party.

State Democrats from Cawthorn’s 11th District have written a letter to Speaker of the House Nancy Pelosi asking for an investigation into the Republican congressman. They claim there was an ethics violation for "violent language" on his Twitter feed leading up to the unrest last week at the Capitol.

"Mr. Cawthorn needs to be held accountable for his seditious behavior and for consequences resulting from said behavior," reads the letter, which was obtained and published by The Mountaineer. "We will not tolerate misinformation, conspiracy theories, and lies from our Representatives."

Rep. Madison Cawthorn, R-N.C., speaks as the House debates the objection to confirm the Electoral College vote from Pennsylvania, at the U.S. Capitol on Jan. 7. (House Television/AP)

The letter -- signed by the 11th District Democratic Party Chair Kathy Sinclair, along with four other party officials -- asked that if the two-thirds vote needed for his expulsion could not be met, that the Speaker censure Cawthorn instead.

"In a speech to the crowd at the rally immediately before the Capitol was attacked, Representative Cawthorn incited the crowd again using violent language and calling his colleagues 'cowards'," it adds.

A spokesperson for Cawthorn told Fox News that the North Carolina Democrats have "no moral authority to speak up now when they were silent" during the summer's Black Lives Matter protests.

"Cawthorn has condemned the abhorrent violence on January 6," the spokesperson continued. "He has criticized President Trump for directing protestors toward the Capitol and repeatedly told protestors that the legal pathway to address their concerns was through debate on the house floor, by their elected representatives, not violence in the streets of the Capital."

Pelosi could not be reached by Fox News for comment.

"Unlike NC-11 Democrats, Madison Cawthorn condemns mob violence under any banner. NC-11 Democrats were silent when left-wing mobs attacked civilians, businesses and law enforcement in Asheville," the office said. "They have no moral authority to speak up now when they were silent then."

Cawthorn, in the wake of the Capitol Hill riot, also told House lawmakers that he was "bitterly disappointed by the protests that happened."

"The actions of a violent few were cowardly and pathetic," he added.

A petition for Change.org also has garnered over 27,000 signatures and has demanded Cawthorn's resignation, pointing to a speech he gave in December advising pro-Trump supporters to "lightly threaten" congressmen who refused to condemn the Presidential Election as fraudulent.

Cawthorn is also not the only Republican facing threats of censure following the Capitol attacks.

Rep. Mo Brooks, R-Ala., faced calls for censure earlier this week, after he became the first House Republican to openly claim the election was fraudulent.

It is unclear what Pelosi will do following the expulsion and censure demands, but freshmen Rep. Cori Bush, D-Mo., filed a resolution the day of the attack on Jan. 6, calling for the investigation and potential removal of all House members who incited violence by contesting state election results and purporting debunked claims of election fraud. 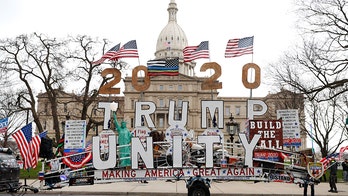