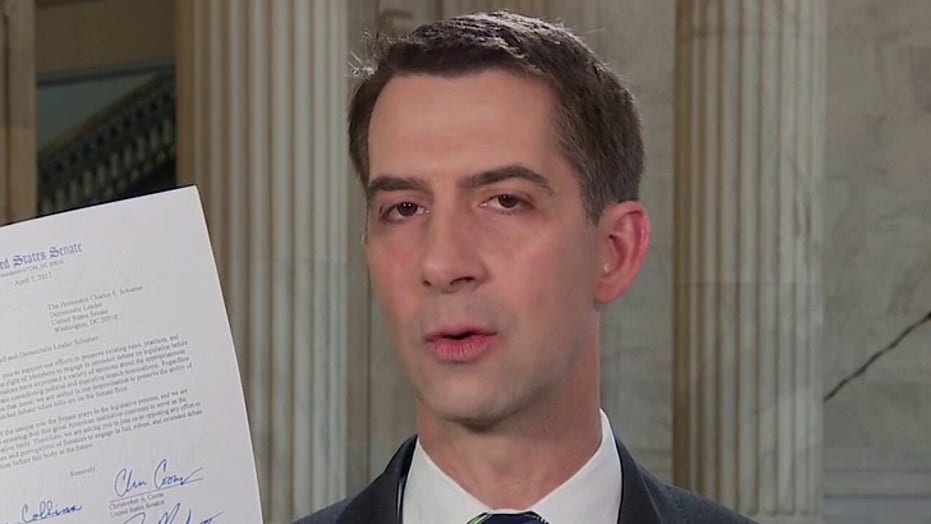 Tom Cotton: Democrats who want to end filibuster signed letter to keep it four years ago

As progressives push hard for Democrats to eliminate the legislative filibuster after gaining control of the Senate, House and the presidency, many Democratic senators are distancing themselves from a letter they signed in 2017 backing the procedure.

Sens. Susan Collins, R-Maine, and Chris Coons, D-Del., led a letter in 2017 that asked Republican Leader Mitch McConnell, R-Ky., and Democratic Leader Chuck Schumer, D-N.Y., to preserve the legislative filibuster. As it's existed for decades, the filibuster requires 60 votes in order to end debate on a bill and proceed to a final vote.

"We are writing to urge you to support our efforts to preserve existing rules, practices, and traditions" on the filibuster, the letter said.

Sen. Chris Coons, D-Del., speaks as the Senate Judiciary Committee hears from legal experts on the final day of the confirmation hearing for Supreme Court nominee Amy Coney Barrett, on Capitol Hill in Washington, Thursday, Oct. 15, 2020. Coons has softened his support for the legislative filibuster in recent years after leading an effort to protect it in 2017. (AP Photo/J. Scott Applewhite)

But now, the momentum among Senate Democrats is for either full abolition of the filibuster or significantly weakening it. President Biden endorsed the latter idea Tuesday, announcing his support for a "talking filibuster."

"I don't think that you have to eliminate the filibuster, you have to do it what it used to be when I first got to the Senate back in the old days," Biden told ABC. "You had to stand up and command the floor, you had to keep talking."

The legislative filibuster has been a 60-vote threshold for what is called a "cloture vote" -- or a vote to end debate on a bill -- meaning that any 41 senators could prevent a bill from getting to a final vote. If there are not 60 votes, the bill cannot proceed.

The "talking filibuster" -- as it was most recently seriously articulated by Sen. Jeff Merkley, D-Ore., in 2012 -- would allow 41 senators to prevent a final vote by talking incessantly, around-the-clock, on the Senate floor. But once those senators stop talking, the threshold for a cloture vote is lowered to 51.

Harris' office confirmed to Fox News Wednesday that she is now aligned with Biden on the filibuster issue. She'd previously taken an even more hostile position to the filibuster, saying she would fully "get rid" of it "to pass a Green New Deal" at a CNN town hall in 2019.

Coons, who led the 2017 letter along with Collins, has also distanced himself from his previous stance.

Vice President Kamala Harris attends a ceremonial swearing-in for Sen. Patrick Leahy, D-Vt., as President Pro Tempore of the Senate on Capitol Hill in Washington, Thursday, Feb. 4, 2021. Harris has changed her stance on the legislative filibuster since signing a letter in 2017 backing it. (Michael Reynolds/Pool via AP) (AP)

"I’m going to try my hardest, first, to work across the aisle," he said in September when asked about ending the filibuster. "Then, if, tragically, Republicans don’t change the tune or their behavior at all, I would."

Fox News reached out to all of the other 26 Democratic signatories of the 2017 letter, and they all either distanced themselves from that position or did not respond to Fox News' inquiry.

"Less than four years ago, when Donald Trump was President and Mitch McConnell was the Majority Leader, 61 Senators, including more than 25 Democrats, signed their names in opposition to any efforts that would curtail the filibuster," a GOP aide told Fox News. "Other than the occupant of the White House, and the balance of power in the Senate, what’s changed?"

Added Sen. Mark Warner, D-Va: "I am still hopeful that the Senate can work together in a bipartisan way to address the enormous challenges facing the country. But when it comes to fundamental issues like protecting Americans from draconian efforts attacking their constitutional right to vote, it would be a mistake to take any option off the table."

"Senator Stabenow understands the urgency of passing important legislation, including voting rights, and thinks it warrants a discussion about the filibuster if Republicans refuse to work across the aisle," Robyn Bryan, a spokesperson for Sen. Debbie Stabenow, D-Mich., said.

FILE - In this Oct. 26, 2018, file photo, Sen.Bob Casey, D-Pa., speaks to reporters in the studio of KDKA-TV in Pittsburgh. Casey has reversed his stance on the legislative filibuster since signing a 2017 letter in support of it. (AP Photo/Gene J. Puskar, File)

Representatives for Sen. Bob Casey, D-Pa., pointed to recent comments he made on MSNBC.

"Yes, absolutely," Casey said when asked if he would support a "talking filibuster" or something similar. "Major changes to the filibuster for someone like me would not have been on the agenda even a few years ago. But the Senate does not work like it used to."

"I hope any Democratic senator who's not currently in support of changing the rules or altering them substantially, I hope they would change their minds," Casey added.

Representatives for Sen. Angus King, I-Vt., who caucuses with Democrats, meanwhile, references a Bangor Daily News editorial that said King was completely against the filibuster in 2012 but now believes it's helpful in stopping bad legislation. It said, however, that King is open to "modifications" similar to a talking filibuster.

Some of these senators, however, have addressed the filibuster in other recent comments.

Sen. Dianne Feinstein, D-Calif., on Wednesday was asked if she supported changing the filibuster threshold by CNN and said she is still opposed to the idea. "Not at this time," Feinstein said.

Sen. Mazie Hirono, D-Hawaii, speaks to reporters on Capitol Hill in Washington, Thursday, Jan. 30, 2020, during the impeachment trial of President Donald Trump on charges of abuse of power and obstruction of Congress. Hirono has changed her opinion on the legislative filibuster since signing a 2017 letter supporting it. (AP Photo/Julio Cortez)

Sen. Maize Hirono, D-Hawaii, meanwhile said last week she is already for getting rid of the current 60-vote threshold and thinks other Democrats will sign on soon.

"If Mitch McConnell continues to be totally an obstructionist, and he wants to use the 60 votes to stymie everything that President Biden wants to do and that we Democrats want to do that will actually help people," Hirono said, "then I think the recognition will be among the Democrats that we're gonna need to."

The most recent talk about either removing or significantly weakening the filibuster was spurred by comments from Manchin that appeared to indicate he would be open to a talking filibuster. He said filibustering a bill should be more "painful" for a minority.

Manchin appeared to walk back any talk of a talking filibuster on Wednesday, however.

Manchin and Sen. Kyrsten Sinema, D-Ariz., both committed to supporting the current form of the filibuster earlier this year. Sinema was not in the Senate in 2017.

But with Manchin seeming to flake at least in the eyes of some, other Democrats are beginning to push harder for filibuster changes.

Sen. Dick Durbin, D-Ill., speaks during the confirmation hearing for Supreme Court nominee Amy Coney Barrett, before the Senate Judiciary Committee, Wednesday, Oct. 14, 2020, on Capitol Hill in Washington. Durbin was not among those who signed a 2017 letter supporting the legislative filibuster. This week he gave a Senate floor speech supporting a version of a talking filibuster, which would weaken the precedent in its current form. (AP Photo/Susan Walsh, Pool)

"Today, nearly 65 years after Strom Thurmond’s marathon defense of Jim Crow, the filibuster is still making a mockery of American democracy. The filibuster is still being misused by some Senators to block legislation urgently needed and supported by strong majorities of the American people," Senate Majority Whip Dick Durbin, D-Ill., said Monday.

He added: "I have been long open to changing the Senate’s rules to restore the ‘standing filibuster.’ If a Senator insists on blocking the will of the Senate, he [or she] should have to pay some minimal price of being present. No more phoning it in."

Republicans, meanwhile, are warning that Democrats will regret it if they kneecap the filibuster.

"The legislative filibuster defines the Senate as the world’s greatest deliberative body.  It would be tragic if it were removed," Sen. Susan Collins, R-Maine, said recently. "And I believe the Democrats would rue the day eventually should they pursue that route."

McConnell, meanwhile, was more explicit in his threats.

"So let me say this very clearly for all 99 of my colleagues. Nobody serving in this chamber can even begin to imagine what a completely scorched-earth Senate would look like," he said on the Senate floor Tuesday. "I want our colleagues to imagine a world where every single task, every one of them, requires a physical quorum."

Nevertheless, Schumer has refused to take getting rid of the filibuster off the table as Democrats aim to pass more major progressive bills with their razor-thin majorities in the House and Senate.

"Failure is not an option, everything is on the table," Schumer told reporters Wednesday.