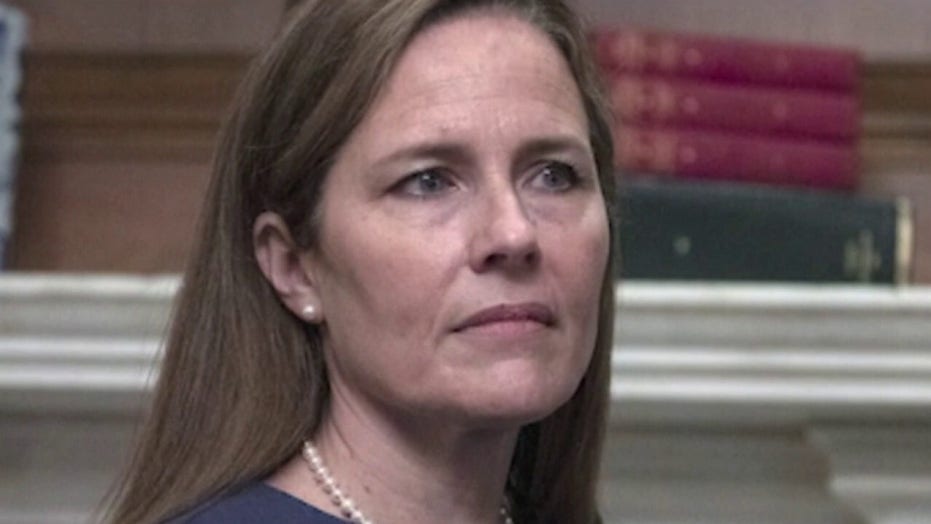 Senate Democrats held a series of phone calls with Judge Amy Coney Barrett Wednesday in preparation for her high-profile Supreme Court confirmation hearing set to kick off next week.

Barrett also headed to Capitol Hill Wednesday for a walkthrough of the room where the Senate Judiciary Committee will conduct her confirmation hearing on Monday for a lifetime appointment to the high court.

Six Democrats spoke by phone with Barrett Wednesday including Sen. Dianne Feinstein, D-Calif., the top Democrat on the Senate Judiciary Committee who is leading the charge in trying to delay the speedy confirmation process until after the presidential election.

Wednesday's calls bring the total to at least eight Democrats who have spoken to Barrett after Sen. Cory Booker, D-N.J., and Sen. Joe Manchin, D-W.Va., previously talked to the jurist.

Certain progressive activists have urged Democrats to boycott the process that they deem is illegitimate and some senators have outright refused to meet with Barrett, including Judiciary Committee members Sen. Richard Blumenthal, D-Conn., and Sen. Mazie Hirono, D-Hawaii.

Sen. Kamala Harris, D-Calif., is the third Judiciary Committee member who has not met with Barrett, as she's campaigning as Joe Biden's running mate.

Coons said his talk with Barrett Wednesday was a chance to share his concerns, including on the timing of the confirmation and the importance of protecting the Affordable Care Act, which will be before the Supreme Court in November.

“My call with Judge Barrett was not in any way intended to normalize this process, because there is nothing normal about this process," Coons told reporters after the call.

Barrett would make no commitment to recuse herself from any Trump-Biden election dispute that may come before the Supreme Court, he said. She also didn't give any indication of how she would rule on upholding the Obama-era Affordable Care Act (ACA).

"The ACA is not just on the docket of the Supreme Court, it's on the ballot in the fall," Coons said.

Democrats want to wait until after inauguration to fill the Supreme Court vacancy so voters will have a say in the future of who succeeds the late Justice Ruth Bader Ginsburg, who died Sept. 18. They've also called out Republicans for charging through with the hearings even though they sat on President Obama's nomination of Merrick Garland four years ago because it was eight months before the 2016 election.

"I deeply believe we should not be proceeding," Coons said.

But Senate Majority Leader Mitch McConnell, R-Ky., and Judiciary Committee Chairman Sen. Lindsey Graham, R-S.C., are committed to moving full-speed ahead with the confirmation next week, despite the presidential election just days away and a coronavirus outbreak at the White House -- possibly originating from Barrett's nomination ceremony -- that has left three senators infected.

McConnell wants a floor vote on Barrett's nomination before the Nov. 3 election, which will determine control of the Senate, House and the presidency.

McConnell Wednesday also took aim at the media and liberals for bringing Barrett's Catholic faith and membership to religious organizations under scrutiny.

"Judge Barrett’s brilliant legal career and her stellar record on the Seventh Circuit tell us exactly how she does her job: with excellence," McConnell said. "Those are the objective qualifications on which she deserves to be evaluated."

The White House confirmed the calls with the six Democrats Wednesday and said Barrett is preparing for her hearing next week.

"During these calls, the Judge emphasized the importance of judicial independence and spoke about her judicial philosophy and family," said White House Deputy Press Secretary Judd Deere. "Judge Barrett is looking forward to her upcoming hearing on October 12th."